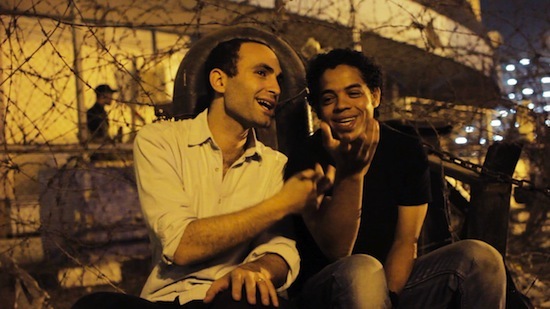 For someone who tries to understand the world through cinema, the revolutions of the Arab Spring have left me wondering: Is "freedom" the new socialism? What I mean is, those two years while in the squares of Egypt, preceded by the souks of Tunisia, and forever in the streets of Palestine it seems that the one time people are all equal -- no class, financial or religious distinctions among them -- is while communally fighting oppression.

Mine is, of course, an outsider's view on the collective work of people struggling everywhere. I could be called out of touch, maybe I romanticize the struggles -- those are all definitions I have heard before. But what I do know is that when so many around the Arab world speak out, we in the rest of the globe have to listen. And take a stand. Even if that stand is unpopular or unconventional. Freedom is worth it all, and more.

In Jehane Noujaim's documentary The Square, the Egyptian revolution is finally explained in a clear, wonderfully intimate and non-condescending way. Filmmaker Noujaim -- of Control Room, Startup.com, Rafea: Solar Mama fame -- takes a different route from the usual documentaries filmed in Tahrir. She filmed in January 2011, of course, but also returned to Cairo several times, to chronicle every moment thereafter. Right up to this past summer, when the Army took back power from the Muslim Brotherhood and Mohamed Morsi.

Apart from its obvious value as a documentary to be reckoned with, The Square is also a great example of crowdfunding at its very best, because Noujaim used Kickstarter to add the final months of footage to her already premiered, and celebrated doc. Her wildly successful campaign only amplifies the credibility of a filmmaker who gets to the heart of the issues and helps everyone else understand them through her clear cinematic vision.

For me, the emotional roller coaster the Egyptian people have been on for the past two years is what hit closest to home in The Square. From the enthusiasm of the first few days after "the Day of Revolt" -- January 25th 2011 -- to their elation at the announcement of Mubarak's resignation, to their impatience at the Army's continued upholding of martial law. And then, in the final stretch, their disappointment and their division, after the elections in the spring of 2012, followed by despair, chaos and disillusionment carrying us back to the present, when the Egyptians' collective voice is still heard, loud and strong, but continues to be not listened to.

In The Square, Noujaim introduces us to a few individuals who help to explain and emotionalize the Egyptian cause, the revolutions but also the human toll of these long years of struggle on the Egyptians' everyday lives. Among them Magdy Ashour, a Muslim Brotherhood supporter and father of four, Khalid Abdalla, a British-Egyptian actor and filmmaker who is best known to western audiences for his role in The Kite Runner, Ahmed Hassan, a 20-year old protester and unofficial Square security, Ramy Essam, the also unofficial yet powerful "singer of the Revolution" and Aida El Kashef, a filmmaker from Cairo who was one of the first to set up tent in Tahrir.

Think of Noujaim's The Square as a sort of "Egypt Decoded" -- a documentary we can all go back to again and again to better understand, empathize and identify with our Egyptian brothers and sisters. It opens this Friday, October 25th in NYC, at the Film Forum, and November 1st in Los Angeles.