To be sure it was going to be worth it, we threw the question out to you guys: do you dare us to make this vintage recipe and try it? You are all either very enthusiastic food historians or total sadists, because you voted overwhelmingly -- 88 percent! -- for us to give this a try and tell you all about it. Well, I did it. And I can tell you now, that although I'm sure this grandma was as nice as can be, she never made this dish for anyone she didn't absolutely despise. I'm not going to bury the lede on this one guys -- never make Jell-O with Shrimp Frosting, even if the internet tells you to. Come along kids, this is going to get gross.

Just in case you've blocked the recipe in question out of your mind, behold, our inspiration.


I assembled the ingredients, of which, there were a surprising amount. 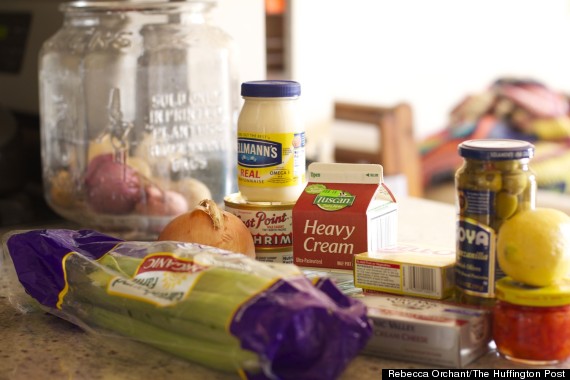 As I started to prepare my mise en place, I began to realize that I'd gotten myself in deeper than I might have realized. There was cream to whip, Jell-O to set, canned shrimp to chop -- and none of it seemed like it was meant to go together. 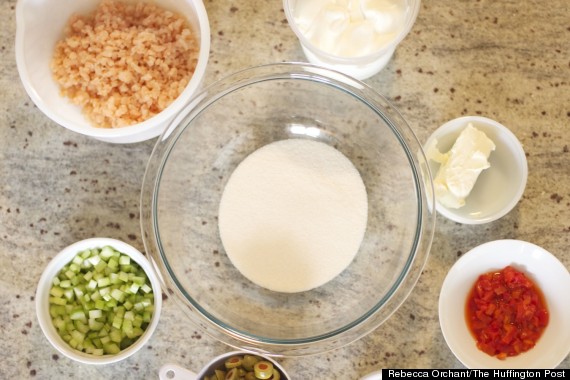 During the first steps of the recipe, it became apparent that a) grandma had really not given enough information and b) this was going to be absolutely revolting. Something terrible happens when you combine lemon Jell-O, hot water and cream cheese. The cheese breaks into tiny bits and looks curdled (which maybe could have been avoided by tempering it, but hindsight is 20/20). 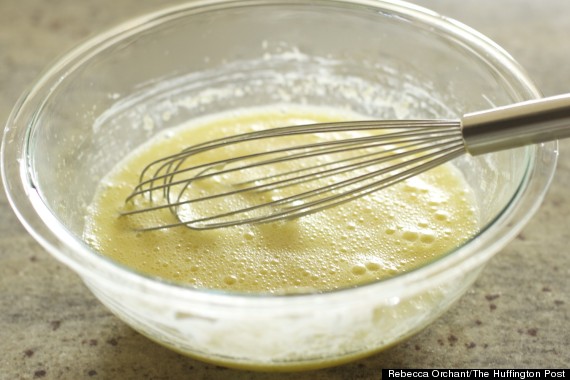 I whisked until I thought my arm would fall off trying to emulsify this into something edible and stuck in the fridge to set up a bit. Once it did, I added the diced celery and sliced olives. It was starting to feel real, and terrifying. Then it was time to fold in the whipped cream. 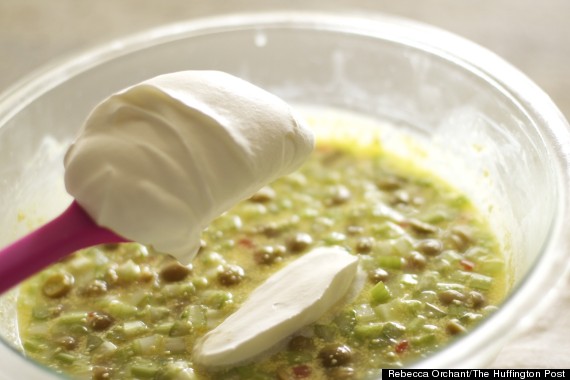 As I folded, I contemplated what could have made a recipe like this popular in the '50s? It wasn't terribly inexpensive to make. Savory Jell-O molds were a bit more de rigueur back then, but how could this have ever seemed like an appropriate combination of flavors? Introspection over, I had something that looked kind of okay. 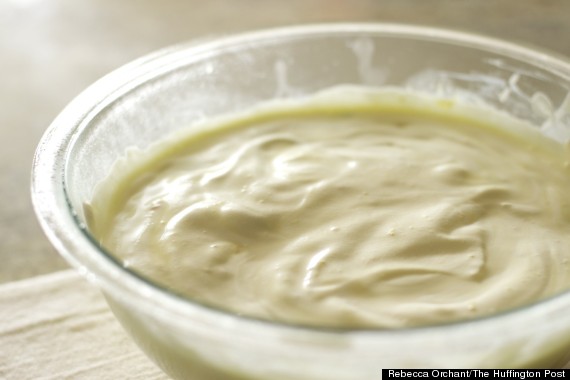 UNTIL I LOOKED AT IT FROM THE SIDE AND SAW THE THING STARING BACK AT ME, MOCKING ME. 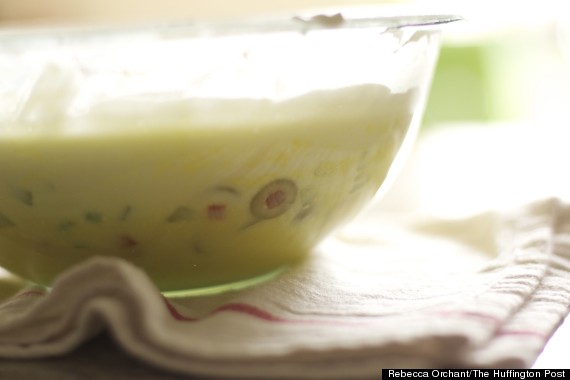 I poured it into a bundt mold and said the following prayer:

My sincerest hope is that the jello mold I just put in the fridge never sets up, so I don't have to taste it. #shrimpfrosting

And then, shrimp frosting time. What you are looking at here: chopped canned shrimp, diced pimentos, chopped onion and minced chives with 3/4 of a pint of mayonnaise. 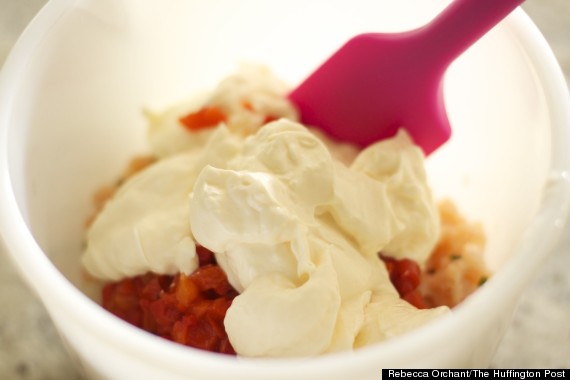 This, friends, is shrimp frosting. Aside from the sheer insanity of all the mayonnaise, kind of underwhelming after all the hype, right? It's basically just shrimp salad. 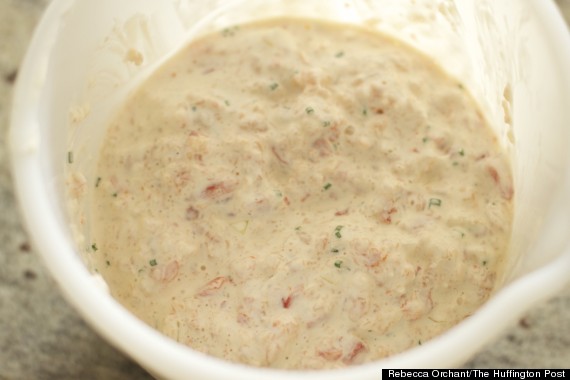 I waited a few hours for the Jell-O to set. My husband came home and asked how it had gone. I indicated that he was lucky enough to not have missed the final assembly and he looked like he might run away. I know I wanted to. And then, I un-molded the thing. For the love of all that is holy, I un-molded it. 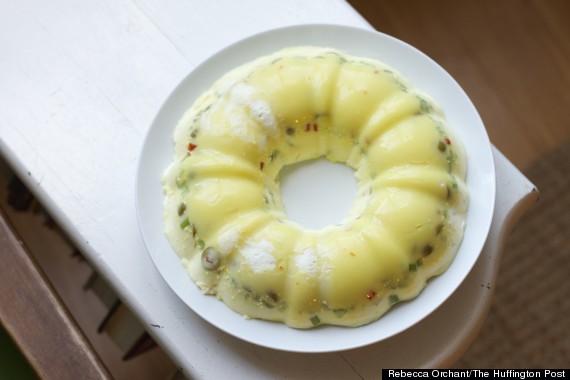 It jiggled like Jell-O, smelled like olives and certainly did not beg to be made weirder, but there was a final step that needed to be completed. The crowning glory. The shrimp frosting. 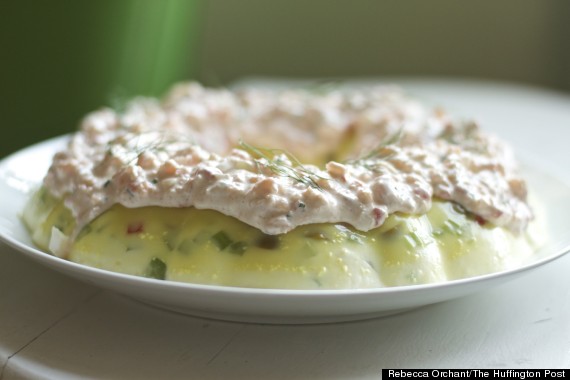 This was sincerely one of the strangest vintage recipes I've ever made in my life, and so far, the least appetizing. There is usually some kind of redeeming "Oh I see how this could be appealing" factor. This... I'm afraid to say had none of that. And yes, I put fennel fronds on it, because I'm not some kind of monster. 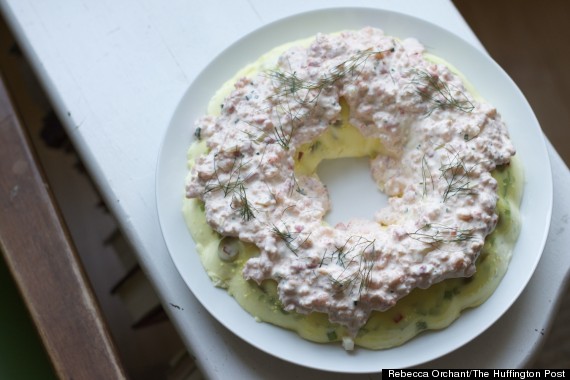 Don't -- I repeat, don't -- make this at home unless you'd like yourself or someone else to leave. I cut myself a slice, set it on a plate, took three cleansing breaths and took a bite. At first blush, it tasted not unlike any Jell-O salad someone's kooky aunt would bring to a holiday party. The whipped cream lightened up the Jell-O nicely, the celery added a not-unpleasant crunch and the olives, while totally weird, were a nicely salty counterpoint to the sweetness. But then... the canned shrimp and mayonnaise and onions got into the mix, and I only made it through two bites before I had to dispose of the entire thing before it CREPT INTO MY SOUL AND TOOK OVER.

I still love Jell-O, I still love shrimp, I still love vintage recipes. I think, however, that I'm going to take a week off from all three. Thanks for making me do this, everyone! We've ensured that I'll never serve it to any of you. And if I do, you know that you should probably run away with all speed.