Jemima Kirke wants to strip the stigma away from abortion -- and she's using her own story to do so.

The "Girls" actress, artist and mom opens up about her personal experience with abortion in a new video, as part of the Center for Reproductive Rights' "Draw The Line" campaign. Kirke explains that she got pregnant in 2007 with her boyfriend at the time, and ultimately decided to get an abortion. "My life was just not conducive to raising a happy, healthy child," she says. "I just didn't feel it was fair."

The costs of abortion can be prohibitive.
Kirke was in school when she decided to terminate her pregnancy and had to pay for the procedure out of pocket. In the video she says she had to empty her checking account, and because of the additional cost, ended up forgoing anesthesia.

"It's these obstacles and it's this stigma that makes these things not completely unavailable -- and that's the tricky part, is that we think we do have free choice and we are able to do whatever we want, but then there are these little hoops we have to jump through to get them," she says.

The financial burden of abortion can place significant strain on lower-income women seeking the procedure. According to a February 2015 investigation by ThinkProgress, "out-of-pocket costs for an abortion can range anywhere from $375 in the first trimester to $6,531 at 22 weeks." Even on the lower end, it's not pocket change, especially if you're worried about being able to put food on the table or pay your rent. 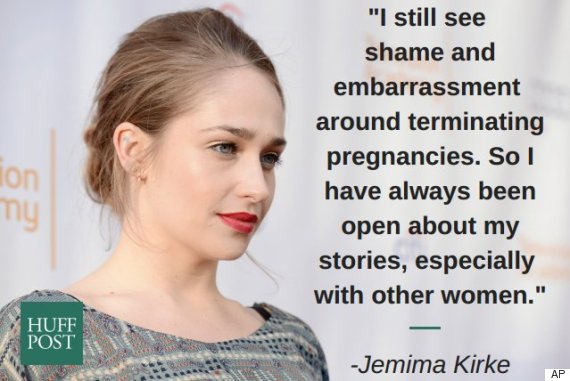 The fight for reproductive justice today impacts the women of tomorrow.

Kirke speaks passionately about her daughter and stepdaughter, and why, for her, the fight for reproductive rights is tied up with her role as a mother:

If we want to reduce stigma, we need to keep talking about these issues.
"I've always felt that reproductive issues should be something that women should be able to talk about freely amongst each other," Kirke says in the video. And that talking could actually have the power to change minds. Research has shown that putting human faces and stories to stigmatized experiences may shift the way other people feel about those experiences.

"I still see shame and embarrassment around terminating pregnancies, getting pregnant -- I still see it," Kirke says. "So I have always been open about my stories, especially with other women."

Myths About Abortion That Need To Be Busted