Local lesbian filmmaker Jenni Olson's The Royal Road (premiered at Sundance) had two sold-out shows at the San Francisco Film Festival. The 65 minutes long work is a poetic essay and a double love story. there is the filmmaker's love for San Francisco, a city where all one's special and beloved places "are disappearing before your eyes," and there is her love for women -- women who are almost too beautiful to be looked at, who are adored, courted, pursued, but remain elusive. Elusive objects of desire: Isn't that precisely what desire longs for? 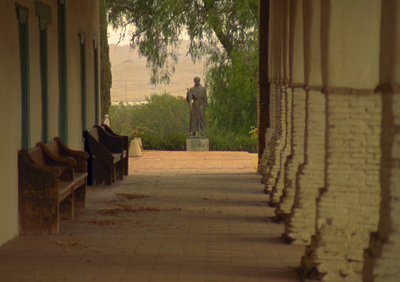 I hadn't seen Olson's previous experimental work (her 2005 The Joy of Life or her earlier short elegy to Harvey Milk, 575 Castro Street). The originality and boldness of the new work reminded me of the poetic cinematic essays of another local filmmaker, Jay Rosenblatt. The Royal Road is a quiet, meditative piece of work, described by Olson as "a lyrical new film contemplating butch lesbian desire, nostalgia, Casanova, a history of the Mexican-American War and so much more."
We see streets and alleys of the city, roofs and sky-lines with clouds and birds, cars and ships quietly moving past the camera, while we listen to Olson's voice-over and her sensitively timed silences. Olson has an appealing cracked voice that seems to hold two melodic lines, and the "white" sound surrounding it has a light swoosh, creating a mysterious impression of wind sweeping through the silent cityscapes. Olson's meditative road trip seems filled with this imaginary wind, evoking associations for me like the wind-blown trees in The Singing Detective or the hidden mysteries of the park in Antonioni's Blow Up. 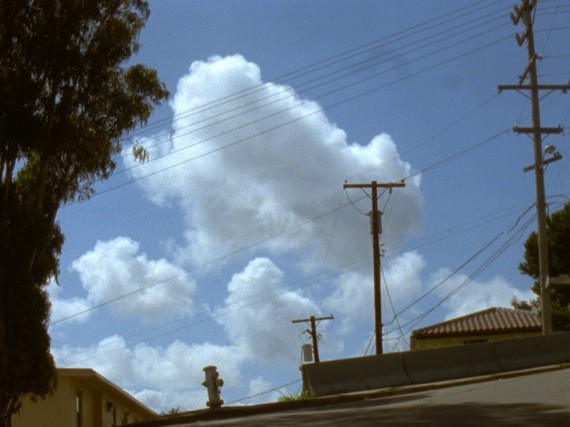 In the first of several "chapters" the filmmaker takes us from the Oakland Port via Amtrak to Los Angeles, drawn by longing for a woman. She follows the historical Camino Real or California Mission Trail with its mission bells set up along the road. The narrative veers into the history of California, to memories most people "prefer not to remember": the cruelties of the Mexican War and the brutality of Christian canonization of the native Indians, driven by Junipero Serra, the Spanish friar who built the missions set up the mission bells along the road, and who right now is the controversial hero of the Catholic church.

Returning to San Francisco, the road smoothly winds back and forth between past and present, the personal and the political with something like a musical rhythm and a mood that brought me back to Dionne Warwick's nostalgic '60 hit, "Trains and Boats and Planes". Olson talks about the path of longing, her early intuition of being queer before she had any knowledge of her desire for women, encountered in Shirley McLaine's character in The Children's Hour. Movie classics like Roman Holiday resonate as the great prototypes of unfulfilled romance that our culture so willingly embraces. The cinematic leitmotiv of the Royal Road, however, is Hitchcock's Vertigo. Living in San Francisco, the narrator says, "is like living on the virtual set of Vertigo." Which means, living with the classic film's obsessive connection between San Francisco, the past, love and loss, memory and moviemaking. She muses that the heroine of Hitchcock's film is called Madeleine: could that possibly be an allusion to Proust's madeleine, his famous key to memory? Isn't she, Jenni Olson, on the same "search for lost time," in the city she loves? If the places she is obsessed with have been disappearing one by one, then holding them in the eye of her camera, holding still, becomes her way to stop time, to possess the desired place outside of time and change.
In the Q&A at San Francisco Film Festivel, an audience member asked if making this film--which took eight years of work--changed Olson's relation to Hitchcock's classic? "The very day I finished my movie," she replied, "I had an attack of vertigo. That certainly changed my relationship to it!"
The same charming self-irony imbues Olson's pursuit of the women with whom "nothing ever happens." In one case, in San Francisco, the filmmaker confesses to the overwhelming desire to kiss the beauty. But which drama would provide an excuse? Perhaps only a natural disaster would permit such a thing. What kind of disaster? An earthquake perhaps?

Similarly, Olson muses which archetype of the great male lover she might claim for herself: Lothario, Don Juan, Romeo, or Casanova? She decides for Casanova. Casanova was warned never to tell the truth in the narration of his adventures. The warning, the filmmaker notes, came too late: the story had already been told.

One of the chapters is humorously called "In Defense of Nostalgia." A post-modern hesitation lingers over the romantic concept of nostalgia, and Olson deals with it as she deals with most of her self-revelations. The "male voice of criticism" suddenly speaks in Tony Kushner's lecturing voice, ranting against nostalgia, getting the audience to laugh. After all, Olson's whole movie is the "royal road" of nostalgia. Remembering the past, looking back with longing, the filmmaker says, may save us from the alienating clutter of virtual reality. In this sense, Olson's elegant meditation can be seen as a journey back to the Romantic.