Orphans are often the protagonists in bed time stories and in children's adventures. From "Great Expectations" to "Annie," kids who are plunked into the most devastating situations manage to rise, triumphant, from the rubble. Jennie Ottinger's subjects are not those kinds of orphans.

In her upcoming exhibition "What To Do With Your Orphan: A Manual," Ottinger helps plotting godparents figure out the most effective ways to manipulate and exploit their wards while feigning parental love when others are looking. There is something a bit off about Ottinger's orphans; however, because they don't just play the victim. Her loosely rendered paintings obscure faces into horrifying fields of pink skin, somewhere between a little kid making an art project and an old photograph whose subject's face has been scratched out. Children, adults, babies, even dolls are given Ottinger's eerie Francis Bacon touch, leaving the viewer not sure who to trust.

Ottinger has a knack for turning sweet situations into freak shows and macabre subjects into inappropriate jokes. Her warped sense of humor turns a baby in a carriage into a more disconcerting image than a funeral. Through the ugliest of times, Ottinger suggests, laugh. And Ottinger's works are full of ugly.

We asked Ottinger some questions about her upcoming show during a phone interview. Scroll down for slideshow. 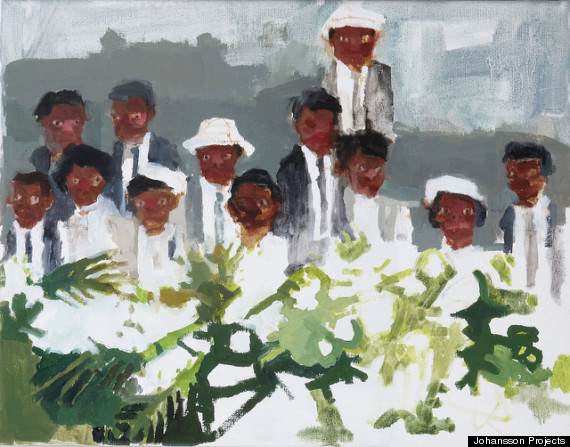 HP: How did you think of the concept for your exhibition?

JO: It started, actually, when a friend of mine asked me to be her kid's godparent and I had a baby a couple years ago when I went through the same thing. You look at people really critically when you are thinking who would take good care of her kids. And when she asked me to be her godmother I was really excited to hang out with the kid, but then it hit me the only way that would happen was if she perished. And I was like "Oh! That would be so much fun! I'd love to hang out to hang out with your daughter in the case of your untimely death."

It's really weird. Then the idea shifted to: what would it be like if you had an orphan that you had to take care of? And I started thinking of how it could be good and then I got kind of absurd and was thinking about how you could make then do things for you. It got kind of crazy because I was reading all of this stuff about the pre-segregated South and I was like "Oh my gosh I'm thinking of how to be an effective slave owner."

It's this situation where you have no power and you are at somebody else's mercy, basically.

HP: Can you talk a little about the manual for the exhibition?

JO: It is literally a manual, like if you bought a product and it came with an owner's manual. But it's more just tips on how to be the most efficient exploiter of your orphans. It is actually kind of dark. I was reading it as I was writing it and it was kind of shocking. One of the suggestions is to advise them to push their feelings deep down inside and give them something shiny to play with. Another one is you have to dress them well so it doesn't look like you love them less to the outside world. So a good thing to do is make them do an activity that requires uniforms. Then you don't really have to think about it.

HP: Where did these ideas come from?

JO: When I was 6 my parents died and I was adopted by my maternal grandparents. And it is a bit of a problem because I can't tell my grandmother about the show because I know she will take it totally personally! Of course she was not exploitive in any way but I feel like she would totally be insensitive about it. So nobody can tell her about this show. It sounds like a super personal show, and I mean it feels personal like any other show. But it feels like its about something else. It feels like its about power heirarchy more than anything else and I just happened to use orphans to express it. And I just happen to be an orphan.

My family has the sickest sense of humor. It's hard to remember that other people don't use humor as their weapon. 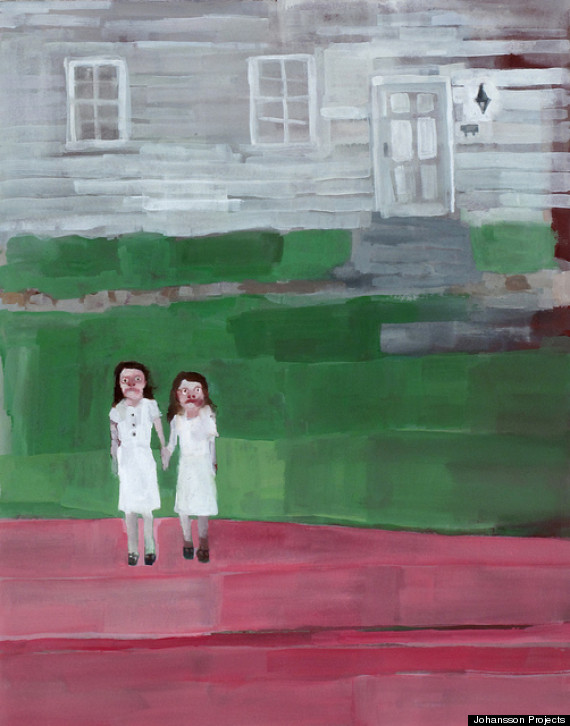 What is your perspective on the relationship between death and comedy?

JO: I honestly don't even think about it until it is totally done. But my family has the sickest sense of humor. For example... this is so dark... My grandfather choked on meat when he was very weak and I gave him CPR and he died. And I was super young, I was like 16, but now the family joke is, when someone is choking, we all say "Don't let Jennie give him CPR!" But yeah, humor is used as a defense and a good way to deal with emotions. Maybe I shouldn't do it so much.

HP: Trust me, my family is the same. It is a gift and a curse. Your style is very natural and a lot of the eeriness of your forms look like they are happening out of your control. How much do you leave to chance in achieving this horrific effect?

HP: Do you have a favorite orphan? Was there some sort of character you were thinking of for the show?

JO: There are so many orphans in stories because for the kids to have an adventure the parents can't be around. Especially since my parents died when I was 6 I just devoured orphan works. Great Expectations, Anne of Green Gables, Dumbo, Annie, The Rescuers... There is so much and there is a sort of romantic nature to the idea of being an orphan that I was so into. And I was so into it, me and Pip on the streets.

"What To Do With Your Orphan: A Manual" runs from May 10 until June 16 at Johansson Projects in Oakland, California.

Does this show make you laugh and feel guilty about laughing? Let us know your deepest, darkest reactions.