Jennifer Aniston was pregnant again this week, but that's not really news. The tabloid industry has been systematically attempting to get Jen pregnant for at least a decade now.

Some might say they are trying to sell magazines, although maybe they know that all anyone really wants is for Jen to be happy. So, in lieu of facts, the editors of America's gossip mags compose daily fan fiction about a very special realm of Hollywood: Jennifer Aniston's womb.

In light of yet another bout of rumors, we decided to take a look at the countless false alarms that have popped up through the years. Personally, we're waiting for the cover that reads "Jen: Pregnant With Octuplets And Married To Both Justin AND Brad" and means it. But until we get the fairy tale for real, all we can do is dream.

Here, to help you avoid getting knocked-up by the lies, a complete guide to Jennifer Aniston's many pregnancies:

Pregnancy By The Numbers
The tabloids may not have truth, or facts, or reporting or anything that even remotely resembles journalism, but they do have one thing: math. Behold the calculations that help gossip mags calculate Jen pregnancy rumors. We imagine they use a sort of quadratic formula, but with more fake nursery photos.

Pregnancy According To National Interest
The tabloid industry has math, and they also have science, which proves that we want Jen to have a baby. This graph is a statistical representation of the fact that, despite various wars and the current possibility of military action in Syria, all anyone cares about is whether or not there will be a baby for Jen:

Pregnancy By Type
In constructing the Jennifer Aniston mommy fantasies, tabloid editors can get a little overwhelmed by all the lies. Behold the very nuanced ways in which they have valiantly helped us to struggle through the complete and total lack of real-life Jennifer Aniston pregnancies.

The Long-Awaited And Therefore Joyful Pregnancy
Here the tabloids are just thrilled about the fake pregnancy that they have created. Sometimes the story centers on an empowered Jen, having the baby on her own. However, no matter the details, the fake pregnancy is gleefully overjoyed ... filled with so much warmth, it almost makes you wonder if Star or OK! will be invited to the non-existent baby shower. 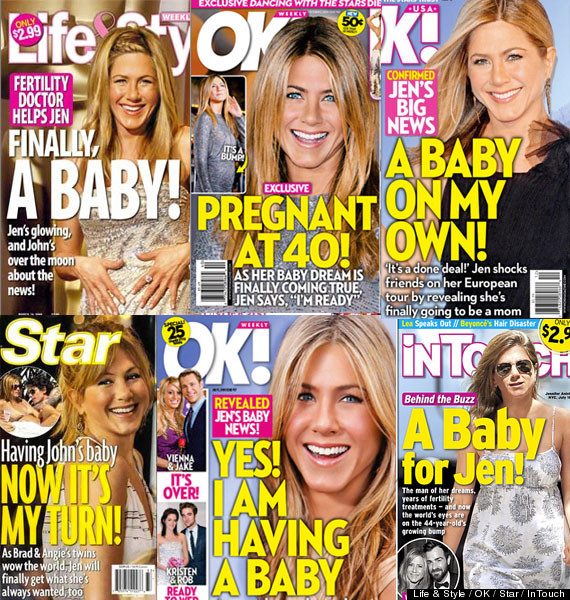 The Secret And / Or Shocking Pregnancy
Don't get it twisted, the tabloids genuinely care about Jen (Jen-uinely, they do), but when all the burden of creating fake Jen pregnancies rests on their shoulders, they can get really frustrated. Caught up in the tireless effort of grinding the rumor mill, they project their struggles onto the story, painting a scandalized version of the world in which there is a baby for Jen. It's all vaguely dystopian. 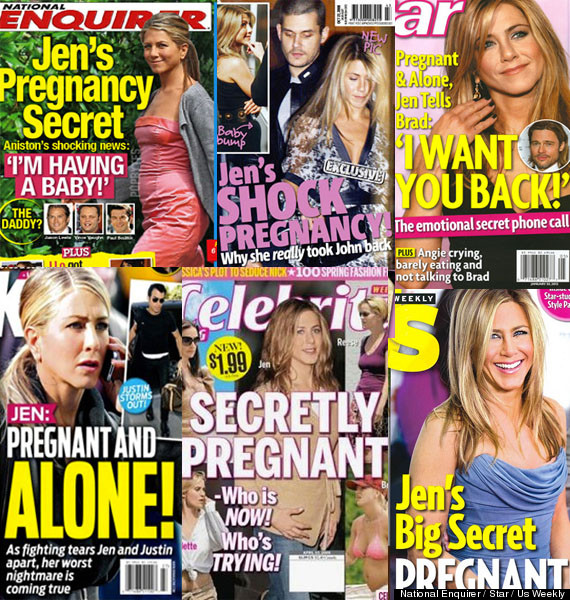 The Pregnant Bride Pregnancy
The pregnant bride pregnancy capitalizes on the social taboo of a shocking pregnancy and ADDS A WEDDING. This is definitely the most complexly exciting preggers Jen rumor. Will she get down the aisle in time? Will she find a dress that fits?! There are so many questions and not a single one of them is "How do people think this is true?" 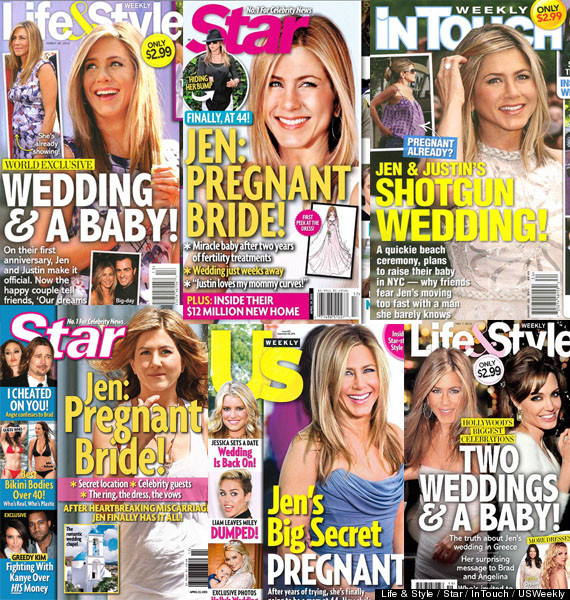 The Empirical Pregnancy
This type of pregnancy rumor is not a rumor at all, in that it is based on purely observable evidence. Here, the story is built using real-life Photoshopped photos, which point to undeniable data like "bigger boobs," a "curvier booty," and -- of course -- the "telltale bump!" It's unclear how Jen can even refute these cold, hard facts. 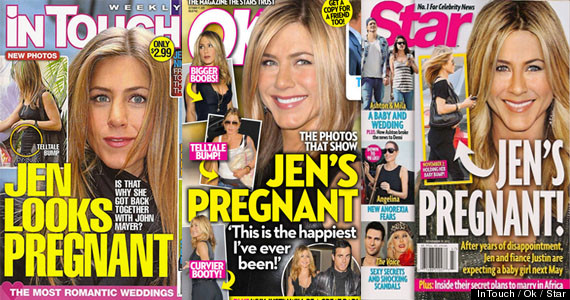 The Double Pregnancy
OK, this is just overzealous. In the double pregnancy, the tabloids add not just one but TWO fetuses to Jen's womb. As they say, "Shoot for the stars, and you'll land on a cloud (where there is still no pregnant Jennifer Aniston)." 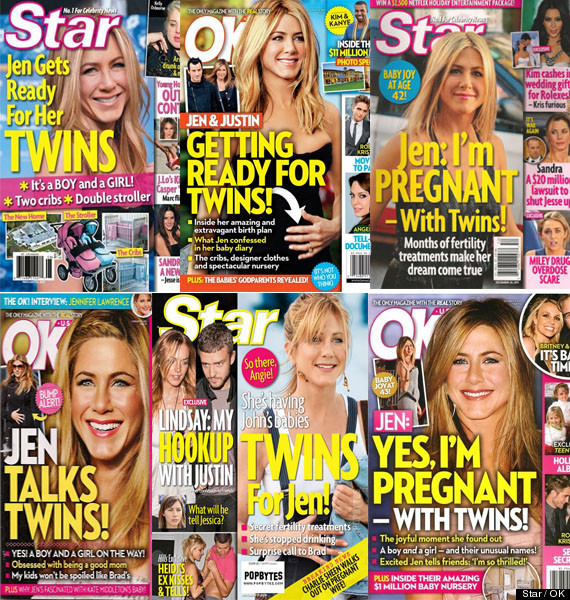