Imagine this: at one point, casting directors didn't much want to put Jennifer Aniston in their shows and movies.

Her first role, she remembers, was, "as an extra on my dad's [actor John Aniston] soap opera, 'Search for Tomorrow.' When I was 12, I asked him if I could get a part on his show," she says. "I wore a yellow skating outfit, and I was kinda large. It's hard to look good in yellow, and I certainly did not. I remember I got a check for about $100, and I was blown away."

But unfortunately, she didn't always have that type of in. Which meant struggles -- for both her, and a great many diner-goer's pants.

"Later, I waited a lot of tables, and I wasn't very good at that. I dropped more than one Alpine burger in customers' laps, and you just do not want all of that Swiss cheese and mushrooms in your pants," she says. "I wasn't a good waitress, but I was told that I was very nice and charming, so people liked me anyway."

Still, that charm took a while -- and a cross country move -- to pay off in more than just tip money.

"I spent my first paycheck on a vintage Mercedes. I was struggling a little in New York, working as a waitress at Jackson Hole [diner], but not really getting any consistent acting work," Aniston remembers. "Then I moved out here to Los Angeles, and I started getting pilots and working pretty regularly. I still didn't make any decent money until I got on 'Friends.'"

Of course, the rest is history -- but she did have a backup plan. Or at least one in retrospect.

"Maybe an interior designer," she says of a career other than acting. "I love seeing a house and thinking about how it should be redone or restored. I spent a lot of time doing my current house, and it's beautiful... It's like a beautiful work of art, and I'm very proud of it."

One thing she probably wouldn't be? A dentist. Or, at least the kind of dentist she portrays in "Horrible Bosses": a sexual-harassing DDM with a mean streak and a taste for Charlie Day. Word is that there may be a rare Aniston topless scene in the film, too, which would take her farther from her yellow skating outfit roots than ever before. 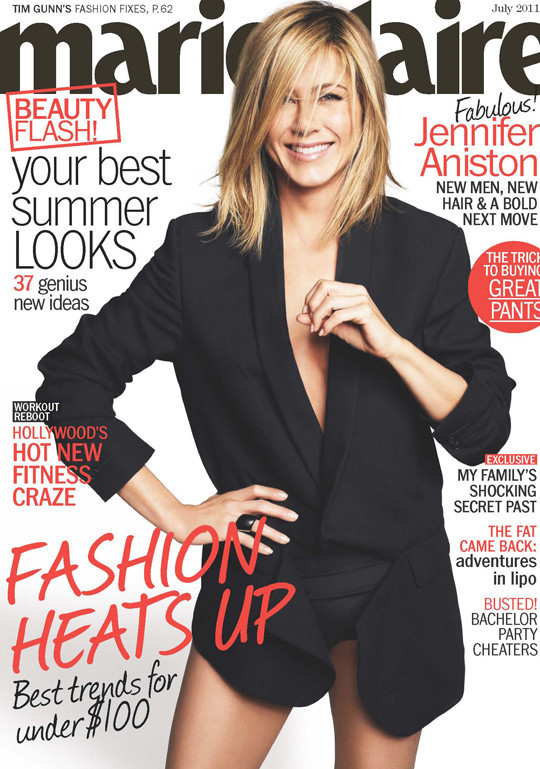