It took a village -- not to mention a vigil -- to save the home of Jennifer Britt.

Facing eviction was the latest in a string of catastrophes to befall the then-49-year-old Detroit woman, who had lost her job as an administrative assistant in 2010. She had also lost her husband, Leon, who was killed in a car accident in 2006. Then, after years of negotiations, she received notice in 2010 that her home on 15071 Warwick in Rosedale Park was being foreclosed upon by Flagstar Bank. Britt shared the home with her son, her elderly mother and a 77-year-old uncle, whom she described as developmentally disabled.

Britt's dilemma is one many homeowners have faced over the last several years, especially in Southeast Michigan, where the collapse of the housing market took an incredible toll. Britt, however, refused to pack up her belongings and leave behind the house she and her family lived in for over a decade.

When legal means failed to stop the foreclosure, she turned to Detroit's eviction defense community for assistance. With help from groups like Occupy Detroit, BAMN (By Any Means Necessary) and her neighbors, Britt engaged in high-profile public campaign to save her home. It was an effort that included not just a vigil, but a blockade of a dumpster that would have been used to empty her belongings.

U.S. Rep. Hansen Clarke -- who recently left office -- intervened on Britt's behalf, securing a temporary halt on the eviction from the government-backed financial institution Fannie Mae. After a stalled attempt to buy her home back, Britt finally negotiated a deal for a new mortgage late last year with a lending company called Opportunity Resource Fund.

In this interview (SEE VIDEO ABOVE), the Huffington Post speaks with Britt about the campaign to save her home, her thoughts on the foreclosure crisis and how her neighbors, the Cullors, got involved in a very similar fight.

Britt's eviction defense group can be contacted at detroitevictiondefense@gmail.com. 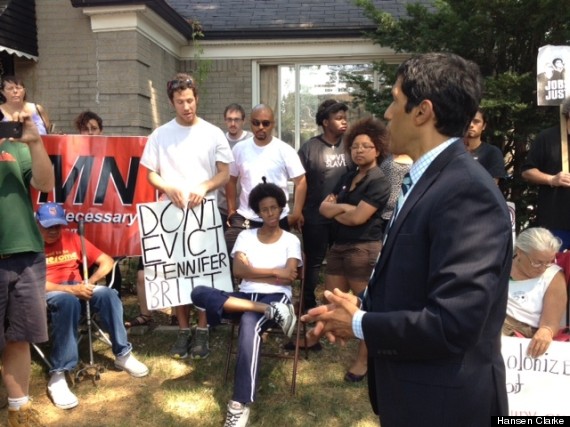 U.S. Congressman Hansen Clarke joins a rally to save Jennifer Britt and her family from eviction.