In the entertainment world, this has definitely been the week of Jennifer Garner. From her interview in Vanity Fair, discussing her hugely public separation and divorce from Ben Affleck, to her recent video, where she drops several "F" bombs, Jennifer Garner is having a moment!

Let's start with the "F" bombs. "Go the F*** to Sleep" is a sarcastically adult take on a children's bedtime story, written by Adam Mansbach, expressing the parental frustration with children not wanting to go to bed. Garner appears in the video reading the book to the camera.

It's a little disconcerting at first, because Garner's image is fairly wholesome compared to many other actresses. But, in the end Garner uses that image to her advantage to cleverly execute reading the lines with a sincerely honest humor.

As a famous actress and mother of three children, Garner offers us a surprising glimpse into what may become the new, more edgy side of her public image.

Over the years, as she was married to Ben Affleck, it appeared that Garner was choosing roles that appealed to a more PG-13 audience. Very few of her roles have been dramas, and most of them have been "family friendly."

But, it seems Garner has launched into her rebound from Ben Affleck with full force. Affleck is busy promoting "Batman VS Superman," which opens later this month, and both Garner and Affleck have been in the news, appearing on talk shows, and walking red carpets. 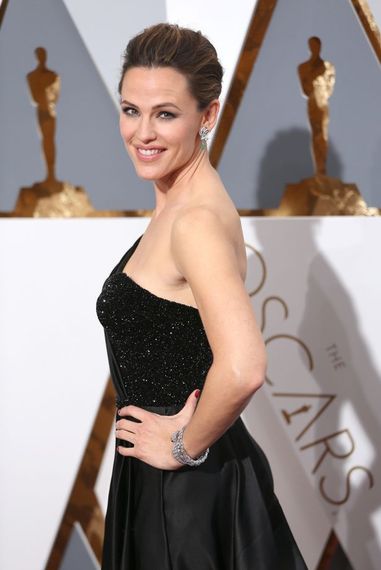 Both Ben Affleck and Jennifer Garner seem to be having a moment, actually. But as far as public opinion goes, I think it's safe to say that Jennifer Garner has won the hearts of women everywhere as she struts her stuff amid the rumors that Ben Affleck allegedly had an affair with their nanny.

Garner opened up to Vanity Fair last week, stating that Ben Affleck "can cast a very long shadow," and that he is "the love of my life." She was also quick to deter attention away from the so-called "nanny-gate," stating that she and Ben had already been separated long before that incident came out in the press.

Garner seems to have the ability to be candid without stirring the pot. She spoke openly about her marriage and separation, but you never get the sense that she's saying anything that's not true.

Now 43, and looking absolutely amazing, Garner may have found her edge with which to launch the next phase of her acting career. There's certainly no better time than a break-up to orchestrate a massive image transformation.

There's no doubt that this is exactly what's on Garner's agenda right now, and she's definitely on top of her game.

Not a major fan of the actress myself, over the last several days I have taken notice of all the press attention she's been getting. Garner's graceful appearance at the Oscars, with her ex, Ben Affleck attending the same function, and her attempt to bounce back into the limelight in a positive, funny, and dignified way, is nothing short of admirable.

Garner may have money, a beautiful home, and much more luxury than most of us, but in the end she is still a woman who just broke up with the love of her life, and the father of her children. Three children as well, which isn't an easy task, even with nannies.

So, hats of to Jennifer Garner this week, who is simply owning it.

More from Michelle - "5 Film and Television Stars Who Are Actually British"
http://hubpages.com/entertainment/Film-And-Television-Stars-Who-Are-Actually-British

Originally a Vancouver Island native, Michelle now resides in California. Besides writing and blogging, Michelle is a mom, stepmom, and wife.