It's a busy autumn for Jennifer Hudson. "The Inevitable Defeat of Mister & Pete," out this Friday, marks her second movie of the season following last month's "Winnie Mandela," in which Hudson plays the ex-wife of South African President Nelson Mandela. She recently unveiled the lead single from her forthcoming third studio album, and in November she'll star in "Black Nativity" alongside Forest Whitaker and Angela Bassett.

Hudson has said her next album will be more "upbeat," yet her current film roles are anything but. Each of the aforementioned movies finds the 32-year-old Oscar winner stepping into the shoes of a character overcome with adversity. In "Mister & Pete," she plays a heroin-addicted prostitute with a 13-year-old son who's forced to fend for himself when she's taken to prison. HuffPost Entertainment caught up with Hudson at the movie's New York press day last week to discuss what it's like to take on such meaty roles, how she feels about the poor reception "Winnie Mandela" has received and, of course, what she'll be for Halloween this year.

Congratulations on the film. Filmmakers always say never to work with animals or children. What did working with kids add and take away from the experience of making the movie? ("Mister & Pete" stars Skylan Brooks as Mister and Ethan Dizon as Pete, his 9-year-old friend.)
Wow, that’s a tough question. I don’t really know what to say. I just know the boys handled it extremely well. It’s their first film, and it was not a little part. They carried the film. And I was just in amazement, in awe, like, “Wow, they’re really handling this well.” And their energy was always up and they were always stepping their game up. They were always ready, I never saw them get frustrated. The biggest challenge we were up against was the fact that they only have this certain window they have to shoot by. And for me, the majority of my scenes were with them. So it’s like, okay, we have to get this in and we have to respect the time and schedule and be on everything.

Gentrification and class distinctions in Brooklyn, where the movie is set, are big talking points right now. Did you think about the gritty depiction of Brooklyn in approaching the role?
I never really thought about those things. I did notice in this film in particular the scenery and the locations were like a character in the film, which was very much needed. And they originally wanted to shoot this film in Chicago. But we no longer have projects in Chicago, at least not as many as far I know.

You’re rolling out several projects in this final quarter of the year, all of which are pretty meaty roles. Is that what you gravitate toward?
I don’t think it’s consciously. It just happens that way. But it’s different things that draw me to the roles, like Winnie, I just felt like, “Dude, that’s a huge part of history that’s missing. Why hasn’t this been told? I want to be a part of telling it.” And there just happened to be a lot of depth to it and dramatics and different things, but that’s because it’s real. And so is Gloria in “Mister & Pete.” It’s like, it is so real, but I do like real things. Even preparing for the physical of Gloria, I was like, “Let it be real.” The majority of answers kind of steer away from that, and I’m like, “No.”

The deglamorized aspect?
Right. That tells a story. You don’t want to sell that short; you want to tell that. And those are the things I look most forward to.

Speaking of the physical aspects of the role, you look emaciated in a lot of "Mister & Pete." Did you have to lose weight?
They did request that I lose about 10 pounds for it. I don’t know that I did. [Laughs] But for "Winnie," I did. But for this one, it was just like, “Oh, if you could lose a little more weight.” But I did learn eventually that with heroin addicts, in doing our research, that it’s not necessarily like a physical thing where you’re too thin or too heavy. But then [director George Tillman Jr.] had this thing where Gloria was so into her drugs that she sacrificed the food, like, "I don’t want to eat, I just want to get high." So that’s what stemmed her to look like she’s lost weight or she wasn’t eating or taking care of herself. And again, to me, so many different elements of this movie tell a story in itself. From the way she dressed, you know, to the locations they were in, everything had a story to it.

What aspects of your own life do you bring to the table when you play a role like Gloria?
You know what, that was the biggest challenge because the only aspects of my life that I had to pull from was the fact that that parallel to Gloria was that she is mom with a son. As far as drugs and prostitution and mistreating your child, I was like, “Whoa, I have nothing to pull from or connect to with her.” And that was intimidating and challenging and very confusing. I was so intimiated to the point that I was dreading it up until the day it was time to film. Like, “We really gonna go for this? I don’t know how it’s going to turn out.” But I’m willing to just hop into it and go for it.

Did you have people working with you in terms of the behavior of a heroin addict?
Yes. I went to a rehabilitation center several times and I sat with different recovering addicts, and they individually told me their stories one by one about how they got into drugs, how long they were on drugs, what the drugs did to them, how they say the drug made them feel. They would describe, “It was my best friend. It was better than sex.” In-depth, like in mad detail. And because I had nothing to pull from and was like “I have no idea,” I was like, “Let me try to connect to one of them and then tell their story, like pull in that way.”

So you channeled specific people’s stories into a composite character?
Right, and one of them sat with me every day on set and shadowed me around and showed like, "This is what it feels like and this is equivalent to an orgasm. And this is what happens with the needles and how to put them together, and this is what it means with the spoon." Down to the science.

Is it easy for you to cry on cue? Are you channeling something from a past memory? Are you so in the moment that it floods you?
It can truly be a bit of both, but that to me depends on the director, which is why I love George. Because I don’t think there are many who can just cry on cue, and if you do, you can kind of pretty much see when it’s real tears and where it’s coming from. And I like my tears to be real. Like, “Oh, Jennifer’s crying for something.” ... I remember the scenes of me being emotional in this one, saying, “Okay, let George know I’m ready and let’s just get this fresh.” ... And there’s a subtext always in my mind. There’s another scene where when Mister tells his mom, “I hate you.” It wasn’t even written in the script to bring tears to my eyes. But just the idea, it became real to me in my mind to make the scene that much more real. I’m like, this is my son telling me, “Mommy, I hate you.” So that was just built-up emotion from right then in that moment, just imagining, “Oh my God, I cannot imagine my son telling me, “I hate you and I want you dead or gone.”

"Winnie" has stalled and received only a very limited release. What's going on there? (The movie premiered at the 2011 Toronto International Film Festival to poor reviews and earned just over $80,000 so far after its limited release in September.)
Well, I’m just glad to see it some kind of platform. It’s been three years for that project, and we worked extremely hard on it. And I had to leave my son for four months for that project, so I’m just glad to get that platform to just be seen, more than anything. And I’m extremely proud of my performance.

Are you disappointed at all in the way the movie has seen its light of day?
No, but again, I’m just glad it got a platform. Because it didn’t have to get that, especially after three years. Let’s be realistic here.

Now for something more lighthearted. What will you be for Halloween this year?
That damn Wonder Woman costume is so cute. And then next, Catwoman. My baby tells me I have to be Catwoman this year, so I’m going to be Catwoman.

Favorite Halloween candy?
Taffy apples is a Hollywood candy. Well, what do you call it? Candy apples? We used to get them for Halloween.

What are you watching on TV?
"Scandal." It better come back on. I was watching "The Voice" last night. I love "The Voice."

Do you keep up with all the music competition shows?
I try, I try. I love "The Voice," I love "Scandal," I love "Family Feud." And my favorite, favorite TV show is that doggone "Criminal Minds." I love that show.

What can we find on your iPod?
Oh, goodness, I’m gonna have to peek at it. I’m into this girl Tory Kelly. She actually auditioned for "American Idol," but now she’s doing her own thing. I have Macklemore on here, I have Ciara on here, India.Arie on here, Kelly Rowland, TGT. I have the "Winnie" soundtrack, which I love because I love African music. What else do I have? Justin Timberlake. Jennifer Hudson, some of which is unreleased.

Oh, you have unreleased Jennifer Hudson?
Yes, the new J-Hud.

Oh, just play it for me right here.
Oh, don’t make me, ‘cause I will! [Laughs] Who else do I have? But yeah, that’s to name a few. But I’m a music head, so I got Black Keys on here, I have fun. on here, Phillip Phillips on here. I just love music. J. Cole.

Would you ever return to "American Idol" in any fashion? Were you in talks?
Apparently it was conversation because my name was everywhere as a possible judge. I always thought anytime the idea came up that I never really figured out how people would respond to an ex-contestant being a judge on the show. I felt like, you know, how would people receive that? I’ve always been hung up on it.

So if asked…
I don’t know, I’d have to think about it. 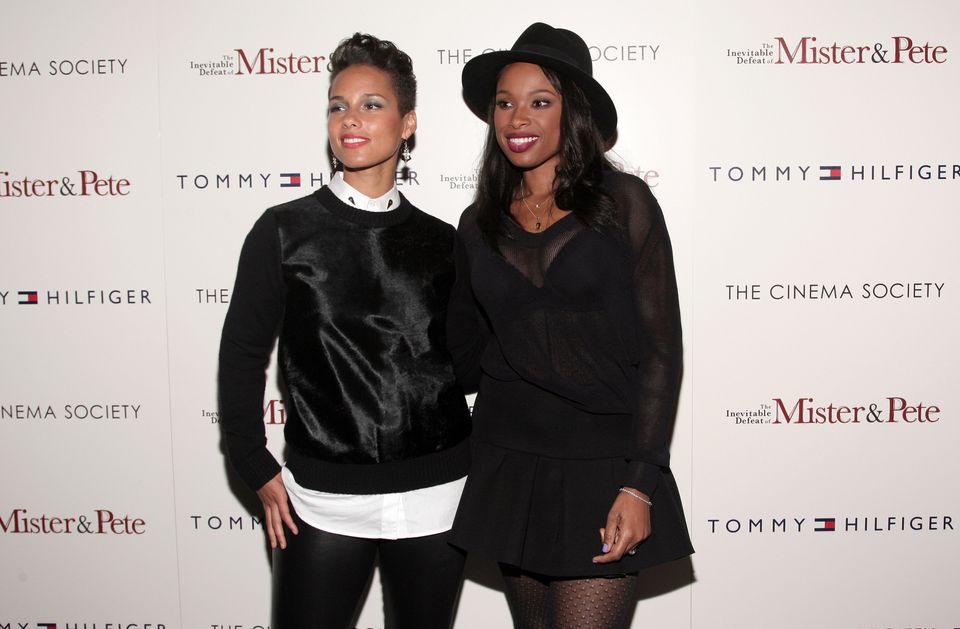