Jennifer Lawrence was the star of the 2013 Oscars: She won Best Actress for her performance in "Silver Linings Playbook," tripped while walking up to the stage to accept the award, graciously joked about tripping during her acceptance speech, and then flipped the bird to photographers backstage. All that before reacting like a normal person would when meeting Jack Nicholson for the first time.

During the ABC post-Oscars wrap-up show, Lawrence's interview with George Stephanopoulos was interrupted by the 75-year-old, three-time Oscar winner.

"You did such a beautiful job," Nicholson said. He then apologized for disrupting the interview, to which Lawrence responded with a laugh, "Yeah, you're being really rude."

Nicholson exited, but not before telling Lawrence how much he enjoyed her work in "Silver Linings Playbook" and also doing a little bit of flirting. "I've thought about it," he cracked. Lawrence then put her head in her hands and said, "Oh my God."

Watch the charming interaction above, and check it out in photo form below. More on the 2013 Oscars can be found here. 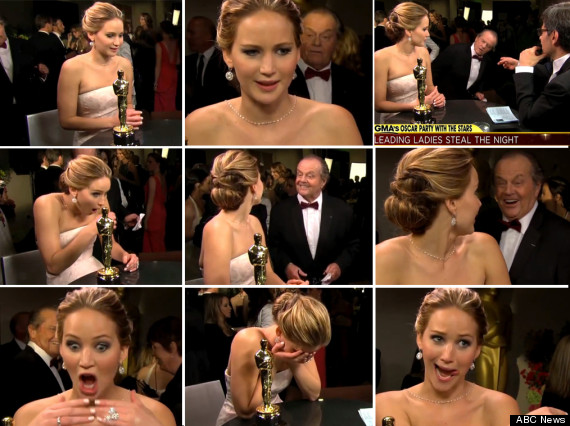