Celebrity women: they're just like us. They eat pizza! They take selfies with their best friends! They wake up with mascara smeared under their eyes! And they run the risk of having their naked bodies splashed all over the Internet without their consent.

On Sunday a 4chan user claimed to have obtained nude photos of a host of young female celebrities -- including Jennifer Lawrence, Kirsten Dunst, Kate Upton and Mary Elizabeth Winstead -- presumably by hacking their iCloud accounts. Almost instantly said nude photos became the evening's hottest Google search, and the unfortunate subject of conversation amongst my fellow Labor Day weekend bar patrons. "Jennifer Lawrence nudes" seemed to be all anyone could talk (or tweet) about.

As Roxane Gay put it for The Guardian, "There is an insatiable curiosity when it comes to the nude celebrity woman’s body. She puts herself in the public eye and, in turn, we are entitled to see as much of her as we so desire, or so I am sure the justification goes."

And despite the fact that the 4chan hack and the proliferation of the stolen images across the web was very clearly a crime, it didn't take long for the victim-blaming to begin.

Hey @itsjenIawrence. Maybe you shouldn't pose nude if you can't handle the public seeing it. #dumdum. And don't step on downed power lines!

@M_E_Winstead Most people in the public eye ignore things they don't want ppl to be interested in. Almost like you're enjoying the attention

Unfortunately, it is difficult for some to grasp that women's bodies, particularly famous women's bodies, are not public domain, ripe for consumption whenever the fancy strikes. 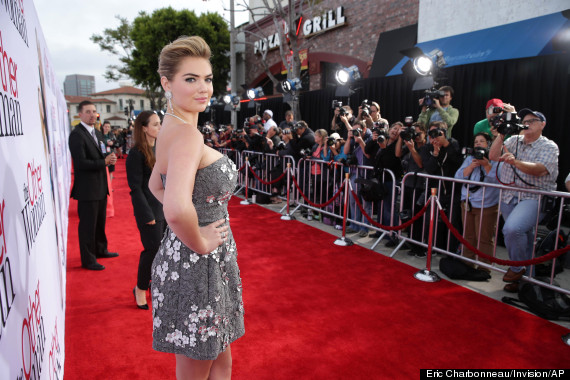 Kate Upton, one of the other celebrities whose intimate photos were hacked and posted, on the red carpet in April.

But it's not just women in the public eye who have to worry that their private lives will spill onto the Internet in ways they did not condone and cannot control. Non-famous women's lives have been derailed because an angry ex decided to post their intimate photos online, or because their email accounts were hacked.

The culture that tacitly condones involuntary pornography is connected to the culture where women are significantly more likely to be virtually harassed or cyberstalked, and where female journalists are subject to online trolling and verbal abuse at greater rates than their male counterparts. There is a reason why Amanda Hess was able to write a gripping and in-depth 7,000-word feature titled "Why Women Aren’t Welcome on the Internet" for Pacific Standard in January -- she had a lot of material to work with.

BuzzFeed's Anne Helen Petersen also cautions against being "scandalized" by the most recent round of nude celebrity photographs, as it will perpetuate and confirm the "market" for such images -- and she's right. After all, there is nothing particularly revelatory about a naked body on an iPhone. (Yes, even celebrities have them, and yes, even celebrities sext photos of said naked bodies.) The real scandal is just how often these sort of "leaks" happen against the will of the women exposed by them, famous or not, and how little these flagrant violations of privacy surprise us at this point.

It's exhilarating and empowering being a woman with an opinion and a voice in the Internet age. But as I scrolled through my Jennifer Lawrence-filled Twitter and Facebook feeds this weekend, I was reminded that it's also really f**king exhausting.

Going on an internet break. Feel free to my @'s for a glimpse of what it's like to be a woman who speaks up about anything on twitter 👍