Jennifer Lawrence's experience on the set of "X-Men: Days of Future Past" will be much different than it was on "X-Men: First Class." According to Lawrence, she'll wear a blue body suit to play mutant anti-heroine Mystique and not transform into the blue-skinned character using body paint.

"I'm so excited because I'm going to wear a body suit," Lawrence told E! Online after Sunday's Oscars. "It will be from neck down so it will cut out time and the blisters."

For the first film, Lawrence endured up to seven hours of make-up application to play Mystique.

"There's no CG for me," Lawrence joked in a DVD extra from the film. "I had the theory, when I was really tired -- when I was on my seventh hour -- why don't you just dip me in a bathtub with blue?" They didn't. Six makeup artists were need to complete the Mystique costume.

For more on Lawrence, head over to E! Online. Check out Lawrence's Mystique look in the "X-Men: First Class" photo below. 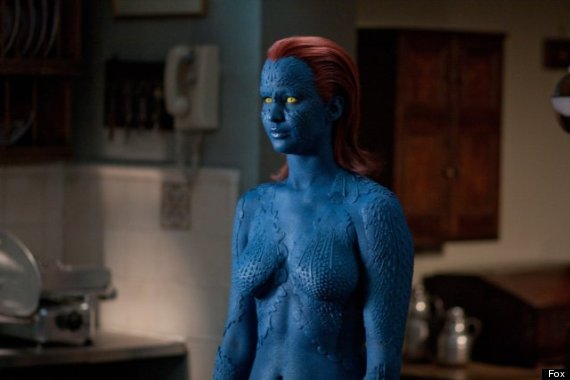