When a 4chan user leaked a cache of celebrity nude photos last week, including those of Jennifer Lawrence and Kate Upton, internet users responded in a variety of ways.

Some chose to respect the women's privacy and just didn't click. Others began a strange movement to compensate for ogling by donating to cancer research. The nastiest reaction so far, we're sad to report, goes to a Los Angeles-based artist named XVALA, who is, you guessed it, appropriating these images as art.

(And by appropriate, we mean displaying them on canvas, life-size and unaltered.)

XVALA will showcase the images as part of his "long-awaited," according to the press release, "No Delete" exhibition. It will run at Florida's Cory Allen Contemporary Art, which dubs itself "the world's first PR gallery" and refers to itself with the hashtag #CACA.

The rest of the show features more of the same -- years of celebrities' most intimate and comprising photos, accessed by paparazzi or hackers. His most famed work is a framed image of Britney Spears from the shaved head-era. Essentially, if you love tabloid trash but want to get pretentious about it, this is the show for you.

"We share our secrets with technology," XVALA said in a statement. "And when we do, our privacy becomes accessible to others." Thank you, XVALA, for that in-depth analysis, so thoughtfully illustrated via hacked images of breasts. 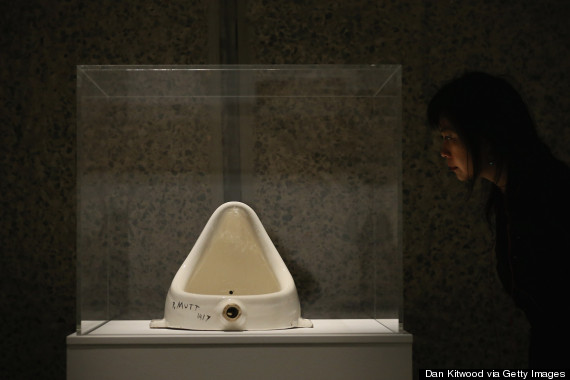 Appropriation art has been a controversial genre since its inception. In 1913 when Marcel Duchamp signed a urinal "R. Mutt" and hung it in a museum, the people were not happy. Later Andy Warhol collected commercial images from advertisements and packaged goods and presented them as art; again, the people were displeased. More recently, artist Richard Prince became entangled in a long copyright lawsuit over his 2008 "Canal Zone" series, which incorporated images by French photographer Patrick Cariou into a Gagosian exhibition.

However, with even the most maddening of art history's notorious appropriation cases, most of the anger stemmed from the validity of the artistic technique itself, rather than the subject matter. When Duchamp exhibited his toilet, he was revealing the arbitrary nature of the art object, and when Warhol pulled a similar move he collapsed high and low culture into an endless stream of images. We're having trouble pinpointing how exactly XVALA is contributing to the artistic conversation, except by proving the internet is a dangerous place for women, all the more so thanks to him.

In fact, more than falling into the tradition of appropriation art, XVALA falls into a darker art world convention, one that feeds off the female body. The female portrait has remained one of the most prominent (and unvarying) traditions in art history. Only today, as opposed to centuries past, there is almost nothing transgressive about a naked woman's image.

XVALA's work also falls into the misguided ritual of shock art, which mistakenly assumes negative attention results from a conservative viewership, rather than a critical or bored one. Truly transgressive artists take risks in their work, putting their own reputation and even safety on the line. They don't shove someone else's body into the spotlight and take all the credit.

Art gives us the rare opportunity to break a variety of rules, hopefully with the purpose of liberation or revelation. In this case, the label of art feels like a lame excuse to commit an act of sexual assault under the pretense of questioning the flawed society we live in. We get it, XVALA. The internet can be a scary place. You're not exactly helping.

"The commentary behind this show is a reflection of who we are today,” said Cory Allen, the gallery founder/publicist. "We all become ‘users’ and in the end, we become ‘used’." Yawn.

People Crying In The Presence Of Marina Abramovic