As a celebrity, Jennifer Lawrence has to deal with a lot of nuts -- but not like this!

Lawrence's face has been immortalized in 9,658 Planters peanuts, thanks to Ripley's Believe It Or Not!

The oddity empire has just received a peanut portrait of the Oscar-winning actress from Mateo Blanco, an artist based in Orlando, Florida.

The portrait measures 78 inches tall and 55 inches wide. It took him 400 hours to complete, including the painstaking task of gluing almost 10,000 shelled peanuts on a wooden board, nut by nut.

Ripley's didn't tell Blanco to use nuts. They just told him to go nuts.

Ripley's commissioned Blanco to make a portrait of a person from Kentucky using a medium associated with baseball for a show about the national pastime next year at the Louisville Slugger Museum in Louisville. Lawrence, the star of "Silver Linings Playbook" and "American Hustle," hails from Louisville. Peanuts are the ever-popular ballpark snack.

At times, finishing the artwork became a hunger game for Blanco.

"I love peanuts, so as soon as I began I ate like three or four peanuts for every one peanut I put in the portrait," Blanco said in a press release.

Blanco has done nine previous works for Ripley's, including portraits made from dog hair, sugar, glow-in-the-dark pasta and balls of wool.

"We of course had to get it framed to prevent people from chewing on Jennifer's ears," Meyer said in the release. 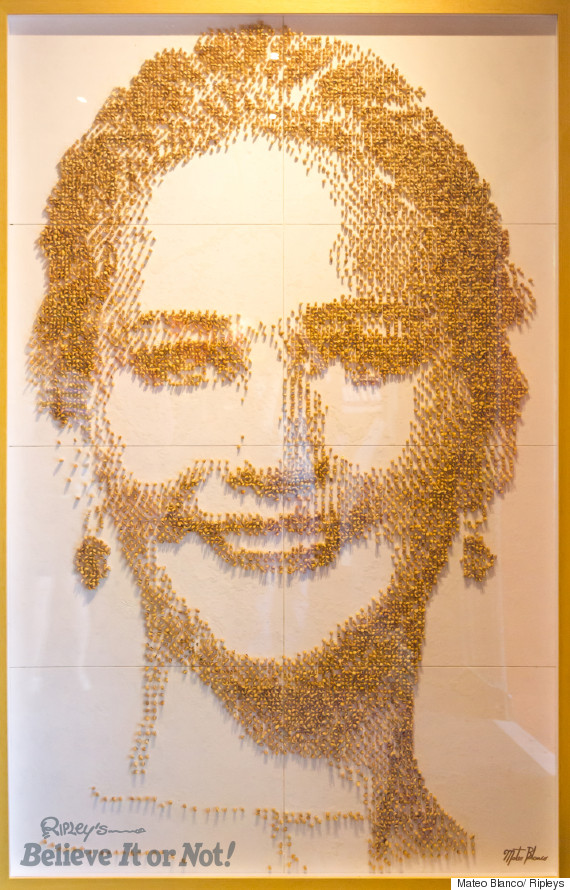 Jennifer Lawrence Immortalized In Peanuts By Ripley's Believe It Or Not!
Unbelieveable But True Images From Ripley&#039;s