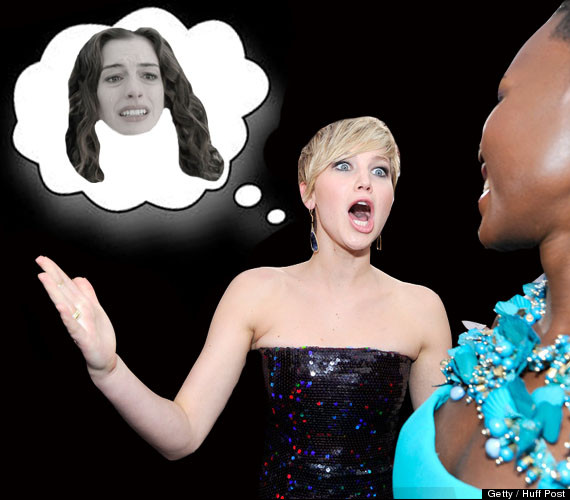 When rising female celebrities walk the red carpet, we instantly make decisions about them that most conveniently fall into the love-hate binary. It all seems so arbitrary, the way we pick sweethearts only to later hurl them from the graces of our general good will. But there are a number of social and economical factors involved in the way we polarize ourselves for or against the latest megastar.

As Lupita Nyong'o is catapulted into "it" girl status and we prepare ourselves for J. Law backlash, HuffPost Celebrity spoke with the author of "The Cult Of Celebrity," Cooper Lawrence, about the underlying complexity of our relationships with famous ladies.

The rise of America's reigning BFF can be traced to the 2013 Oscars, which welcomed a flurry of think pieces, inquiring as to the cause of our apparent dislike of Anne Hathaway (dubbed "Hatha-hate") and hailing the rise of Jennifer Lawrence. The fissure was attributed to Hathaway's lack of accessibility, a feeling that she was "not a real person," as Crushable put it, whereas J.Law was less ostensibly "perfect," someone we could imagine ourselves eating pizza with.

Although, by the time the 2014 Oscar nominations were announced, the J.Law backlash had already begun. "Is Jennifer Lawrence Katnissing Us?" Vulture asked, drawing comparisons to "The Hunger Games" books and films, which warn us "about trusting anything the media serves up as 'genuine.'" Soon enough, Lupita took the statue for Best Supporting actress and everyone (especially Jared Leto) shook their heads at J.Law's failed limo exit, thinking, "Really? She fell again?"

The most obvious take-away from these three women is that our decision to love or hate various actresses often boils down to what feels authentic. Our anticipated rejection of J.Law (much like our year-old development of "Hatha-hate") seemed like an aversion to disingenuous relatability. Though the idea of what is genuine shifts as it applies to Nyong'o, it still applies. The "12 Years a Slave" actress is significantly more poised, reticent and generally less likely to smudge Doritos crumbs on her Oscars gown, but as Willa Paskin wrote at Slate, "Lupita’s more old-fashioned Hollywood grace and glamour suddenly seemed more 'authentic' in comparison."

That perception of what is "real" is obvious, but it's our need for authenticity that makes celebrity worship so interesting. These ladies are actors -- they're paid to dress up as and pretend to be other people -- so why the hell do we care if they're "fake"? According to Cooper Lawrence, the process of assessing authenticity is directly related to our "illusion of intimacy ... the feeling that you really know or 'get' this person." We quickly categorize all people (not just celebrities) into our ingroup or our outgroup and the former requires a perceived bond of mutual understanding or acceptance.

The social impact of our celebrity relationships is so profound that it may boost self-esteem or even assuage a lack of social interaction. In 2008, Shira Gabriel of the University of Buffalo, found our vicarious connection to the lives of famous people can actually increase self-love and mock the positive feelings we derive from more tangible relationships, without fear of rejection. According to the work of University of Leicester's John Maltby, celebrity obsession can actually substitute much of the connectivity and coping mechanisms lacking in disengaged individuals. Lawrence further adds that simply telling your friends about a rising star allows for the positive perception that you are sharing in their success.

Yet, fondness for a specific celebrity is quickly invalidated by any behavior associated with our outgroup or the perception of desperation. "If [our favorite celebrity] dates the wrong guy, says something inappropriate or maybe shows a breast by accident ... if she does something that 'people that I hang out with would never do,' that leads us to start to turn against her," Lawrence explains. Any behavior that defies our hypothetical fantasy world facilitates the rejection of stars. Furthermore, the idea that a celebrity is "trying too hard" interferes with our "illusion of intimacy," as Lawrence phrased it.

The importance of our need to measure authenticity is further explained by economic elements of our relationship to the stars. Lawrence explains that female celebrities "often function as brands," whether advertising or creating products, they are almost always selling us something, and we are aware of that, at least on a subconscious level. In this consumerist environment, we need a rapid fire heuristic for processing the mass of information which determines (or attempts to determine) what we choose to buy. For women, that choice is especially important. "Females hold the purse strings," Lawrence explains, "They have to decide what to buy, for themselves and for their families, and that's affected by whatever celebrity has pinned their name to a product."

That decision is influenced by the things celebrities (and their products, by association) symbolize -- primarily fame, attention and beauty. As consumers looking to earn these glamorous things, we evaluate the stars that are selling them. The second they seem desperate or unnatural, we sense discomfort in trusting them to guide us through the consumer experience. Lawrence adds that the current means by which we observe celebrities increase the belief that we understand them. As opposed to a simple gossip presented in the tabloids, we can watch clips of them reacting to paparazzi or interact with them directly on various social mediums.

Predicting the J.Law backlash in advance seems harsh, but it's not unprecedented. Are we about to start "Hatha-hating" her? Have we had enough of her poop jokes and repetitive professions of love for junk food? Maybe. But it's never been about any sort of genuine feelings for her in the first place. "We don't really care about any of these people," as Lawrence puts it, "We care about our little tiny social environment." It will be interesting to watch where J.Law's next faux fall lands her on the spectrum of public opinion. Although, the way we regard her (or Hathaway or Nyong'o) will always say more about us than it does about them.

Are We About To Start Hatha-Hating Jennifer Lawrence?
Celebrity News &amp; Photos