"Love is love" is the only thing Jennifer Lopez wanted to convey at the 25th annual GLAAD Media Awards this Saturday.

The Puerto Rican star received the Vanguard Award, the night's highest honor, for her LGBT activism and her series "The Fosters." During her acceptance speech, J.Lo opened up about how as a child she was inspired by Rita Moreno, the Latina legend who presented her with the award, and about why she decided to produce a series on a "controversial" topic.

The Vanguard Award recognizes those who increase the visibility and understanding of the LGBT community through their work. Lopez, 44, is known as an outspoken supporter of gay rights. She is an executive producer of the ABC Family series "The Fosters," which follows an interracial lesbian couple and their struggles to raise their children.

After Moreno introduced J.Lo to the stage, the two shared a kiss before Lopez took a moment to thank the "West Side Story" actress for having inspired her as a child.

"I can't tell you what it means to have this award presented to me by the one and only Rita Moreno," Lopez said. "Anyone who has ever heard me talk about my influences knows that 'West Side Story,' and specifically her performance in it, had more impact on me than anything else when I was young -- on my artistic life, my career path and ultimately my confidence."

"She changed my life," Lopez went on. "Watching this beautiful, strong Puerto Rican woman command a screen with her talent in a time when Latina women did not have every door in this industry open to them made me feel as a little girl, watching in her living room in the Bronx, that anything was possible. Anything. Thank you for that."

Lopez also said it was that experience that made her realize how influential media can be, adding that her dream was to empower children through her own work.

GLAAD not only honored J.Lo for her work but gave "The Fosters" the award for Outstanding Drama Series.

Lopez admitted that at first she wasn't sure about putting her name on a show that was bound to be "controversial." She credited the LGBT community's "tremendous love" for her as one of the reasons she decided to move forward with "The Fosters."

The other reason, Lopez added, was her gay aunt.

"TiTi Marisa was my cool aunt," Lopez said. "She was my mom's older sister. I lived in the Bronx and she lived in Manhattan. Like worlds away. And she wanted to be an actress and I always wanted to be like her ... Marisa grew up gay in a time when it meant life could be very difficult and that her struggles were mostly kept to herself. It wasn't until I got older that I really began to know and appreciate the difficulties she dealt with and the struggles of her community."

Lopez said that her family had also taught her the "quiet lessons" of tolerance and acceptance when it came to the love they showed her aunt Marisa.

"We loved her ... so I wanted to do this [show] because I felt like she would be so proud of me," Lopez said. "I thought about that a lot when I was doing this and as I do it now. I think, 'I bet she loves this.'"

J.Lo To Rita Moreno: You Made Me Feel 'Anything Was Possible' For Latinas (VIDEO)
GLAAD Awards 2014 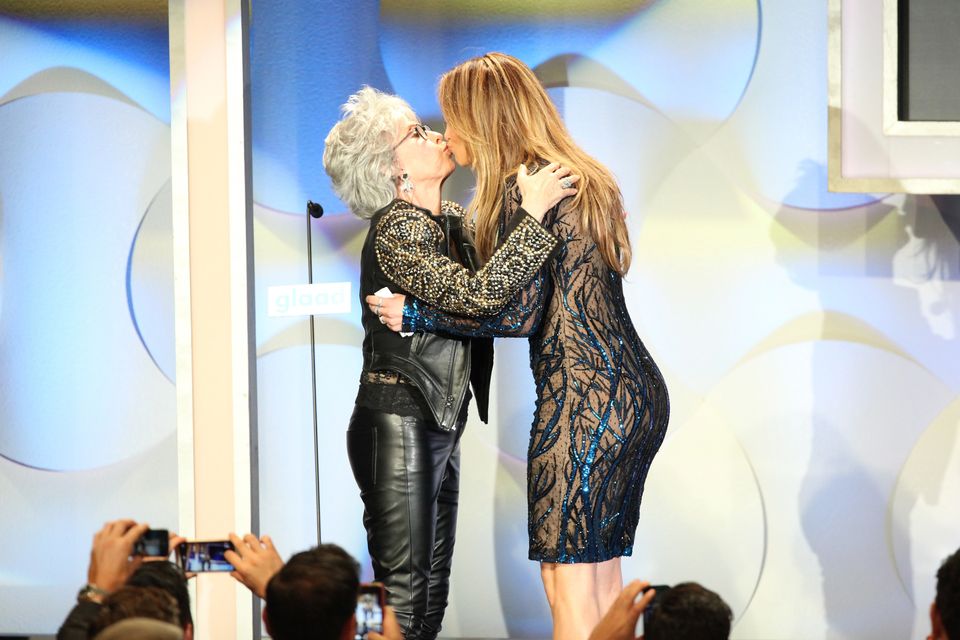