Jennifer Love Hewitt plays a single mom turned prostitute in the new Lifetime series "The Client List," but her curves proved too much for some.

Fishbowl L.A. first reported that the actress received a digital breast reduction in an advertisement for the show found in Entertainment Weekly, while her natural curves remained untouched in an ad in The Hollywood Reporter.

The 33-year-old is known for her ample curves and even she admitted she was surprised to see them nearly vanish in the Photoshopped ad.

"Somebody sent me a copy of the photograph, and I was like, 'Um, what happened?" she told KROQ's "Kevin & Bean Show" on Friday. "I'm not quite sure what's going on, but apparently somebody wanted me to have a boob reduction."

Hewitt likely isn't too happy that someone at Lifetime or Entertainment Weekly thought her boobs needed to be reduced, as she recently told Maxim magazine, "It's horrible to say, but I like my boobs. They've always served me well. They're good."

Photoshopped ads are the norm, but typically actresses end up getting a boost in the bust, rather than having their assets downplayed. Actress Keira Knightley's chest grew significantly in a poster for the 2004 movie "King Arthur," while actress Emma Watson's bust appeared to be digitally enhanced for the IMAX 3D poster for "Harry Potter and the Order of the Phoenix." 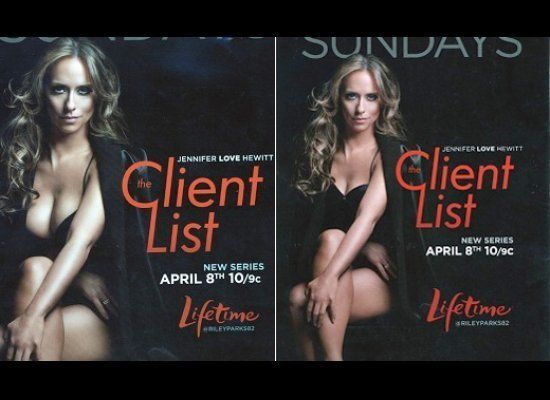