We recently spotted Jennifer Nehrbass' work on Juxtapoz and were immediately entranced by her skillful mix of detailed realism and pop-accented abstraction. Her paintings capture a warped reality of contemporary camping trips gone awry; the hazy realm between fantasy and reality resembles both a dream and a screen saver, but whatever it is we can't stop looking. We asked Nehrbass some questions about her work. Scroll down for a slideshow. 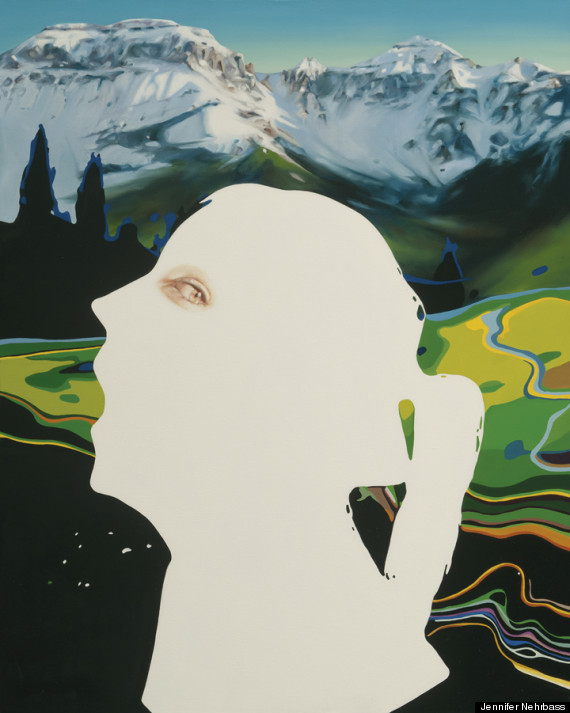 HP: What are you trying to communicate with your work?

JN: Thematically these paintings evoke modern dilemmas of what it means to see and be seen in manner that is simultaneously ancient and contemporary.

What the paintings yield is an intimacy of time and place that meanders through rich details and nuanced perplexity -– bafflement being as necessary to the experience of viewing as is delicate reasoning.

JN: There is an ebb and flow to influences, but the ones who remain would include Maurizio Pellergrin and Joel Peter Witkin. Joel, I would say, is more a mentor/coach. He steadies me and keeps me in the game when there are times of doubt. (He also has a great library of references which I raid when I can!) Lately I have looked to both the prints of Hiroshige and Hokusai and also to the film "The Mill and the Cross." I wrote a short story in art school entitled "If Jane Austen and Stanley Kubrick Had Coffee." I still look to the mixing of those contradictions.

HP: What are you obsessed with right now, outside of work?

JN: In all honesty there is no room but to be obsessed by anything outside of work. The ability to paint everyday is an indulgence unto itself. I have a five year old daughter; life /work intertwine into one big obsession.

JN: If I don't know it how can I be embarrassed? In all seriousness, I wish I would have read sooner "The People's History of the United States" by Howard Zinn.

See a selection of Nehrbass' work below and let us know your thoughts in the comments.