Jennifer Pochinski is a Sacramento based painter who paints in a big, generous style. Although she is a representational artist, Jennifer works like an Abstract Expressionist, often covering an entire canvas in a single day with broad wet-on-wet brushstrokes. "I have to get my nerve up to paint," she explains, "because I'm after the feeling of profundity that is normally found only in abstract art."

I recently interviewed Jennifer -- whose solo show at the John Natsoulas Center for the Arts in Davis, California opens on November 8th -- to learn more about her background and her ideas. 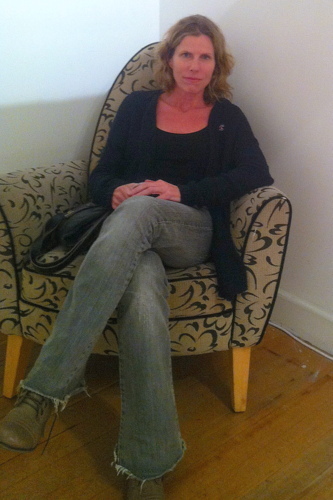 My family moved to Hawaii when I was 11. I attended sixth grade through college on the island of Oahu, but did a bit of traveling throughout those years starting with my senior year where I was an exchange student in Germany. At 19, before I decided to major in art, I worked in a pub in London. I was tagging along with my sister during her semester abroad. That led me to spend a summer in South Africa.

After I received my BFA in painting from the University of Hawaii, I went to London again. It was the first time I was experiencing the art in the museums as a painter. I found myself interrogating the European painters of the 20th century. My interpretation of their message was, " You don't have to explain everything..." Later, while visiting the Whitney at a show featuring American painters, I realized I didn't have to ask the works of art anything. I was knocked out by that visceral response of being 'home.' 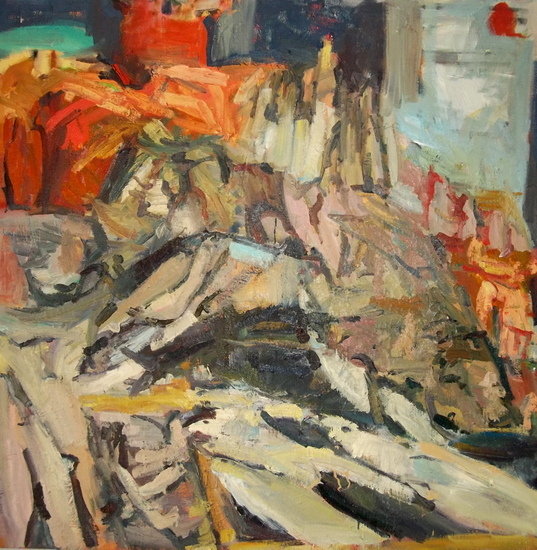 You have lived in European countries, including Britain, Germany and Greece. How did living overseas affect your development?

I started going to Greece regularly in 1995 when I got married and moved there in 2003 but promptly got divorced. Living overseas, trying to learn new languages gave me a more than a few life lessons. When you live in a foreign country, the key to survival is to become like a child again and learn everything from the start. Generally I lived in a state of being open to the present moment and painting was my stronghold. 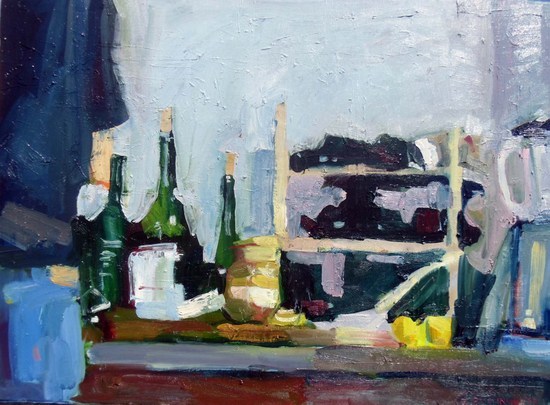 Have you had any teachers or mentors who were especially influential?

In 2002-3 I returned to the University of Hawaii and studied with West Coast artist, Pia Stern. She happened to be a student of Elmer Bischoff at Berkeley. Her philosophy was about 'digging' and finding something personal inside oneself. I remember looking at some artist, maybe it was Joan Mitchell, and I said to her that I was being way too polite in paint and she said, 'Get rude!' Her influence kept me going for years as I painted in isolation in Greece right after that. 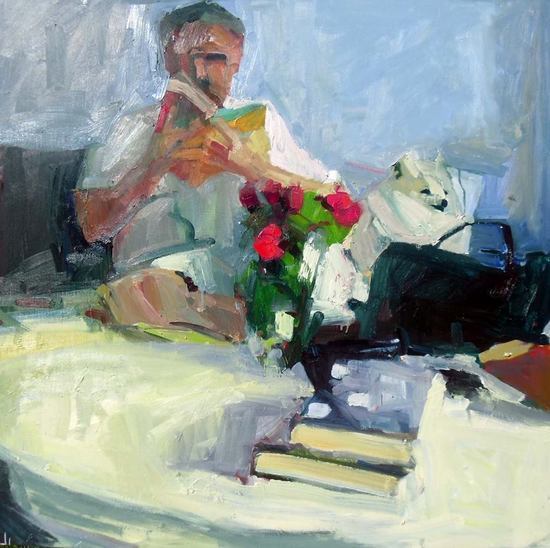 What kinds of subjects are you attracted to?

The search for content is an ongoing process. I like ordinary moments of things I know. But I want the physicality of the paint to be the story and I seek out subject matter that I can get lost in. My guilty pleasure is painting still lifes, so in my most recent work, I am painting objects but with humans as the foil. 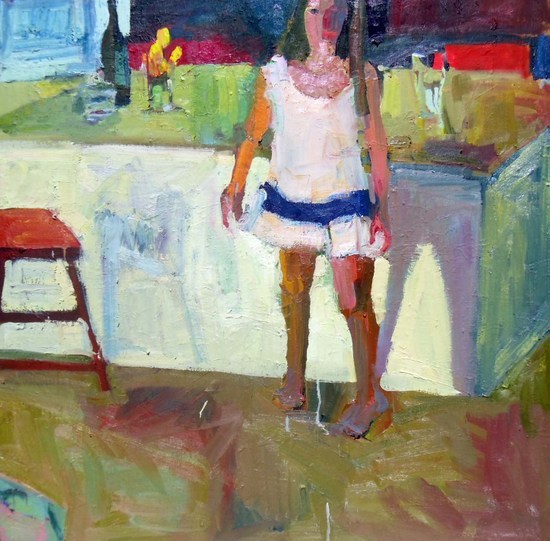 Your paint handling is lush and fluid. Has it always been that way?

My work has indeed changed a lot since moving back to California. I switched from doing smaller still lifes and landscapes to larger figurative pieces with much thicker handling of paint. I am a colorist but I value the neutral mass of leftover paint. Added to fresh color, it introduces an element that I could never think up myself. I love trial and error and fixing things with lots of paint.

Basically I embrace the unexpected and allow the process to be a mystery. This can be a painful process. Sometimes when I walk back 20 feet to look at my work in process I just dread turning around.

I have been studying the transitions into maturity of some major artists. Matisse, Lee Krasner, David Park Robert Arneson. I read Eric Fischl's book "Bad Boy" in which he documents his breakthroughs in detail. For a while I was waiting for some sort of milestone to happen and I would know a formula. Once it gets easy and you know the outcome, it doesn't seem authentic. So I accept that as a painter I am in a constant state of uncertainty. 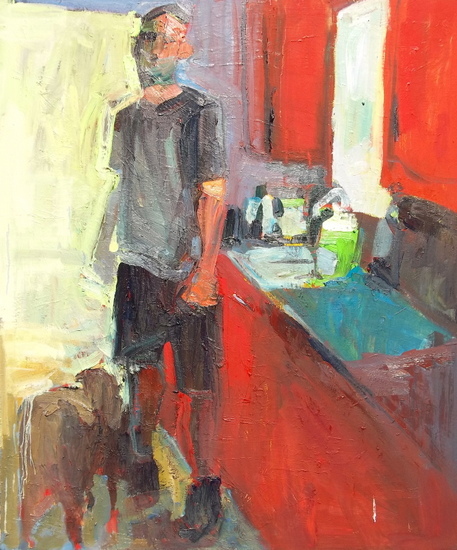 How influential has Bay Area Figurative painting been to you?

One of my teachers told me that my work belonged in the Bay Area Figurative movement. It was a compliment at the time, but it really seemed out of context in Hawaii and Greece. We moved to California in late 2010 and, it was like finding the Mothership. I can see their work first hand at my local museums. I meet people who knew one or more of them. I even had sushi with Manuel Neri! I saw the Diebenkorn show at the De Young twice. I was a little intimidated to go see that collection of iconic work. But I was drawn to his pieces that were, frankly, quite awkward.

One thing in living here where the work is so prevalent, and recognizable, is that it has become an opportunity to go deeper. I really like what Phillip Guston once said: 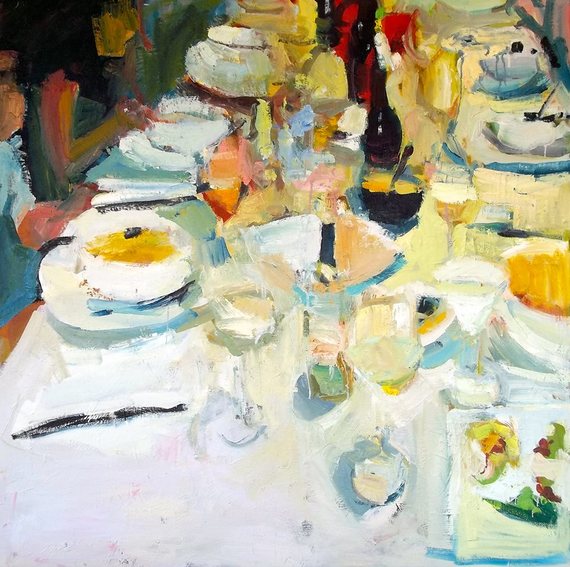 What do you think that your paintings offer to viewers?

I am in this because I love paint and I love the artists before me who loved paint. I always thought my work looks like a live performance, or some moment of outpouring of emotion. If they like that, it is what I can give them.