In Jennifer Vanderpool's world, history has a way of repeating itself. That is to say, the past has a way of making itself known in her life and in her art. That is not only her own past, such as family heritage and personal experience, but also art history, and also sentiment-rich and bygone times in American and global culture. The artifacts of these realms constitute the raw materials of her objects, installations and images. 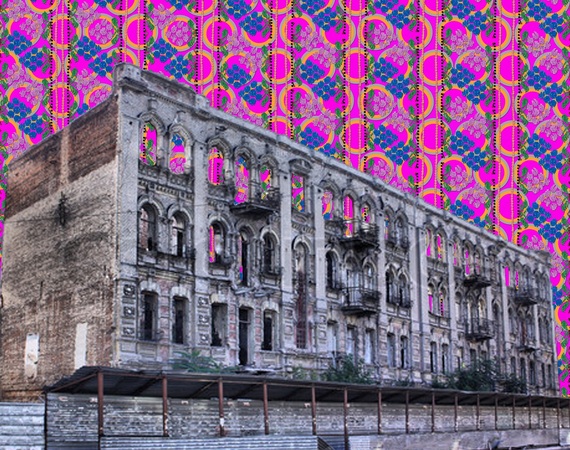 In Northeast Ohio, where Vanderpool is from, there is a community of Ukrainian immigrants and cultural heritage organizations. In her family archive, she found not only family photos, but also her great-grandfather's immigration paperwork. It said "Austria, Little Russia, Ukraine" as his country of origin. There are other branches on the family tree, but yes, Vanderpool's ancestral homeland is the Ukraine -- and no, the curator had no idea about that when she offered Vanderpool the project that became Family Stories/Сімейні Оповідання. 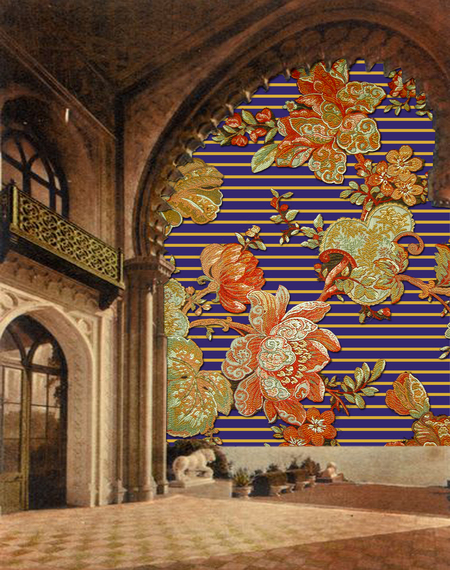 But this coincidence of lineage, profound as it is, is only the fine culmination of a great many other vectors of Vanderpool's world that converge on Sevastopol this November. In fact the suite of 20 prints and accompanying media piece in their content, style, inspiration, materials and narrative echo and evolve the work Vanderpool has been doing for years. In Family Stories/Сімейні Оповідання, textile and wallpaper patterns are used in the composition as stand-ins for elements of space and sky (nature), as well as doorways and windows (architectural facades) and abstract grounds (painterly op-art). The effect is more than a little psychedelic, but quite legible, and seems to speak to the way atavistic identity and resonant ancestry builds up like some crazy palimpsestic collage in the memory -- only to show up again at unexpected moments. 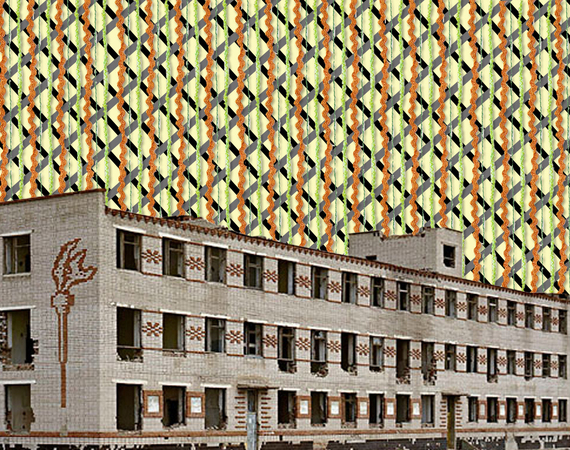 She had been in Youngstown to work on 2012's Hometown Story: Youngstown Steel Kitchens (An Exhibition of Media, Archival Prints, Historic Films and Curated Objects) at the Butler Institute of American Art, and was captivated by the historical archive research phase of the project. She was equally enthusiastic about the subliminal societal insight provided by the content of old-timey advertisements as she was about their compelling aesthetic qualities.

In 2010 she had created the site-specific installation Sagoberättelser (Fairytales) at Designarkivet in Sweden, for which she first mined the collection's archives of avant-garde textiles by the late Peter Condu. And before that, in 2007 she installed You Look Fantastic, Thank You! at the Riverside Art Museum, utilizing vintage wallpaper found boxed up in the basement of her family home. Wanton, a 2011 exhibition at Galería Sextante in Bogotá, Colombia featured photographic prints that were details of the suspended sculptures included in the installation, with screen-print overlays. This perhaps was when she was primarily inspired to reimagine her optical interests in a two-dimensional idiom -- the advanced results of which are evident in the print series at the core of Family Stories/Сімейні Оповідання. 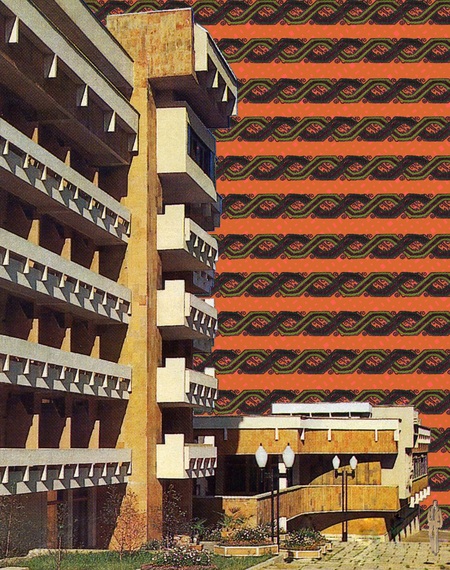 Formalist, familiar, mythological, personal, universal, historical and emotional -- hers is not the only undiscovered history playing out in these prints. Apparently there's a rich history of textile arts in this region that has gone largely unknown in the West. Vanderpool loves that kind of thing and, in a way, exploring this history and building on it for the new work does the job site-specificity in the project. As for the other topics and stylistic flourishes she favors most, there's nothing missing -- family, women, architecture, saturated color, gender roles, traditional foods, sinister pastorals, domestic archetypes, the commerce of the home and so on. 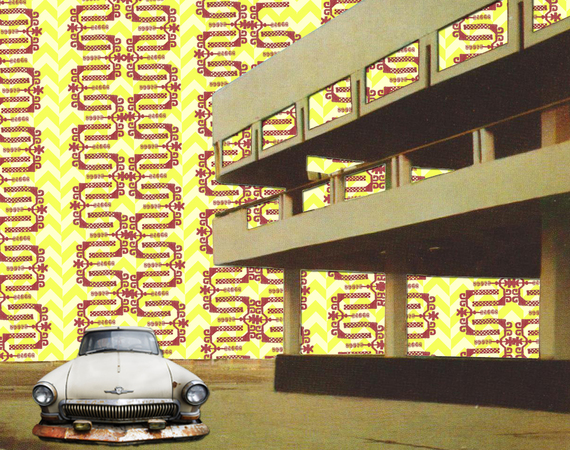 There is a chipper cynicism to the retro character of the figures, buildings, fashions, and patterns, so that there is certainly a sense of tradition, yet there is also a sense of transference and surrealism. In the media piece, there is an image of the actual boat on which her great-grandfather traveled on to the U.S. Her great-grandparents were already married back in the Ukraine, but they emigrated separately because their paperwork came up separately -- she left first, to Montreal. Later they were reunited in New York City and eventually moved to Western Pennsylvania. Vanderpool still has her great-grandmother's steamer trunk -- it's the bedrock of her stockpile of ineffable matrilineal heirlooms. 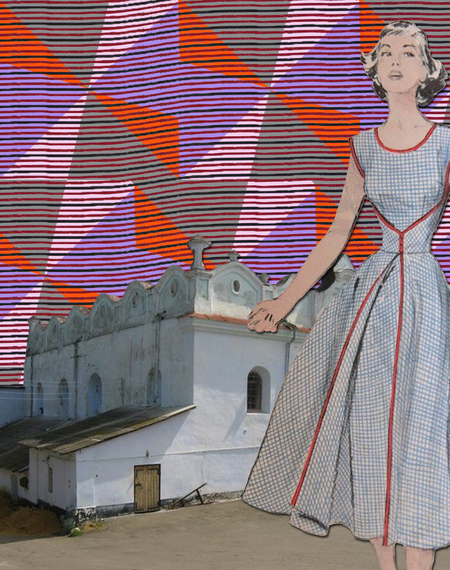