Mad Men may be off the air, but fans are still hungry for gossip about tall drink of water Jon Hamm. Hence why the actor and his longtime girlfriend, director/writer/actress Jennifer Westfeldt, publicly announced their split after nearly two decades together.

"With great sadness, we have decided to separate, after 18 years of love and shared history," the couple confirmed to People in a joint statement on Monday. "We will continue to be supportive of each other in every way possible moving forward."

A cursory Google search shows some news outlets reported this story with as much tact and grace as possible:

But The Hollywood Reporter took a different approach by omitting Westfeldt's name in their headline, reducing her to just being Hamm's girlfriend:

Post-Mad Men, Hamm is without a doubt more well-known. But even the most cursory IMDb or even Wikipedia search shows that Westfeldt is far more than just a celebrity ex-girlfriend. In fact, for most of their adult lives prior to Mad Men, Westfeldt was the far more successful half of the couple (namely, for writing and starring in Kissing Jessica Stein in 2001).

Of course, the good people of Twitter responded immediately:

@THR the girlfriend isn't important enough for you to squeeze her name in this tweet, right?

She has a name. It's Jennifer Westfeldt. She's a very successful actress, writer, and director. Women are not just girlfriends. @THR

The omission is reminiscent of the treatment of Amal Clooney, a lauded human rights lawyer who happens to be married to a very famous George. When the couple married last year, publications ranging from the BBC to the Guardian reported the story with headlines like "Film star George Clooney marries in Venice." One can understand why a site called the Business Woman Media cheekily flipped things around and used the headline: "Internationally acclaimed barrister Amal Alamuddin marries an actor."

So now seems as good a time as ever to briefly share some of Westfeldt's many accomplishments, which any reporter can easily find on Wikipedia:

And for future reference, here are some alternate headlines The Hollywood Reporter can use about Hamm:

This article originally appeared on the Daily Dot. 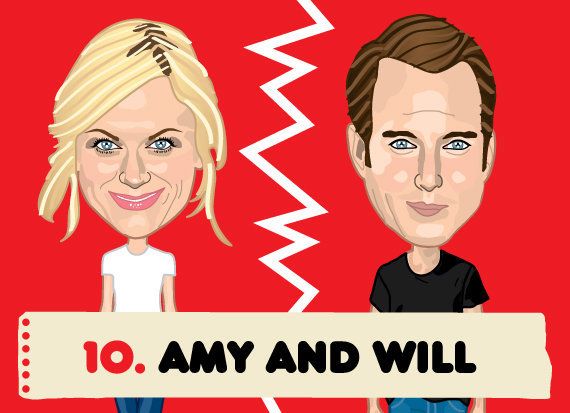 1 / 10
10. Amy Poehler and Will Arnett
"Love is dead!" That's what we thought when Amy and Will announced their split. The couple was married for 10 years and created two adorable ginger babies. Ugh, can't Amy just quit it with the men and get gay married to her friendsbian, Tina Fey?!