Jenny Lewis lives in California but her home is somewhere deep in the cosmos. Thirty-eight years old, with a lifetime of memories already in her past, Lewis now operates with the universe in mind. A few different careers and battles with insomnia and grief have taken her a long way away from the being the child actress who traded mix tapes with Corey Haim. For a while, she was best known for roles in "Troop Beverly Hills" and "Golden Girls." Then she became an indie music darling as the frontwoman for Rilo Kiley and singer with The Postal Service. As a solo artist, her first two albums were anthems to millennials who were just a little too young (and cool) to embody the Lilith Fair spirit. "The Voyager," her first solo album in six years, isn't a comeback. Calling it that would be rude because Lewis doesn't need a reentry, but it is a tipping point in her life, a moment that will sling her forward.

Two years ago, Lewis' father died and she stopped sleeping. "The Voyager" is a project from that time: a dive into aging, loss and those crazy cosmos she loves to reference. It took five years to complete. Due out July 29, it's peak Jenny Lewis: sad and sweet and funny, with jokes about her biological clock and a night of candy flipping.

Lewis spent a little over 10 days recording most of "The Voyager" in Ryan Adams' Pax-Am studio in Hollywood. "We were just going to record one song together," she told HuffPost Entertainment over the phone from Grand Rapids, Michigan. "And one song became two, and then by the end of the day he asked if I wanted to recut the whole record there." Working with Beck, Mike Viola and Johnathan Rice, her collaborator and boyfriend whom she also tours with as Jenny and Johnny, to put together the 40-minute album, she then embarked on an expansive summer tour, playing festivals and shows in the Lisa Frank-like rainbow suit featured on the cover of "The Voyager."

Last year, after she beat her insomnia, Lewis toured with Ben Gibbard and the Postal Service for the band's 10-year-anniversary, but on her own, Lewis is electric. She traded her short shorts from tours past for the multicolored suit, but isn't trying to be an adult in the grown-up sense of that word. All of this -- the rainbows, the jokes about pregnancy tests, the real talk about the cosmos -- is just what she's doing now, and it's working. She spoke to The Huffington Post about Leslie Feist's unlikely influence on her wardrobe, directing Anne Hathaway in a music video -- for the record, the rat tail was Hathaway's idea -- and, you know, the universe.

The first line of your album is, “I’ve been wearing all black,” and, well, you’re clearly not with that rainbow suit. Why did you decide to start the album there?
I think “Head Underwater” lyrically was, for me initially, the mission statement of the record, that line in particular. But throughout the process of making the record, it was less the case. The record starts out in a dark place, but it ends with “The Voyager” out in the cosmos. I thought the rainbow suit really represented in a way the arc of the record. The idea that it gets real, but you kind of journey through it. I thought about for the live shows, starting out in all black, then somehow having some sort of Velcro thing where I could reveal the rainbow suit. I’m working on that.

Where did the suit come from?
The actual suit itself has been hanging in my closet for years. It’s from this place called Aritzia and my friend Leslie Feist was on tour years ago opening up for Rilo Kiley, believe it or not. She was so very sweet to me and we were in Toronto and she said, “Oh I have a hook up at this shop called Aritzia if you want to go pick something out.” I went and, on Feist’s dime, picked out this white suit that hung in my closet for many years. When I was discussing the album cover with Autumn De Wilde, we were talking about this graffiti Gram Parsons idea, this idea of the nudie suit, but updated. Her friend Adam Siegel had been revisiting his airbrushing skills from the ‘90s and he airbrushed on this Canadian suit. 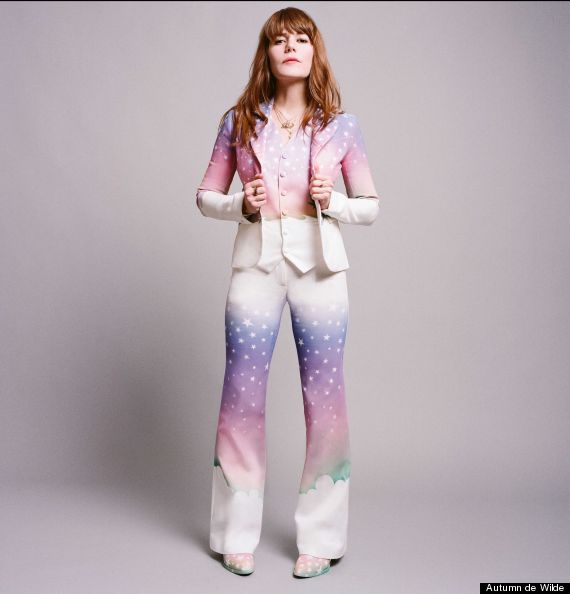 Have you been able to wash it?
Yeah, I haven’t yet. It’s weird to tell everyone. I’ve been wearing a very dirty suit. It’s pretty fresh considering I was in Florida last week.

Where did you get the idea for the "Just One Of The Guys" video?
Well, it’s my directorial debut. I wanted to reference Robert Palmer initially and put together an amazing backing band. But you don’t know exactly at first who’s in my backing band. When you realize who it is, it’s a surprise. Then, just playfully commenting on gender and equality, doing it with a sense of humor. That’s the most effective thing.

Why did you choose Anne Hathaway, Brie Larson and Kristen Stewart specifically?
Well, they’re my friends. Annie and Brie in particular were some of the first people that I played my record for months ago when I first mastered it. Kristen I don’t know as well, but got to know her on the day of the shoot. Tennessee Thomas, who plays drums, is one of my best friends as well. We dressed them in track suits and they were so open and great to watch. They’re just so good that it made my job really easy. We had a blast. We were laughing all day long.

What was it like directing for the first time when the actors were your friends?
It was pretty easy, I have to say. When you’re working with someone like Annie who has an Oscar for a reason, it’s pretty easy. She came up to me at one point very seriously to ask if it would be okay for her to wear a rat tail.

Wait, so that was her choice?
Yes! One hundred percent. How could I possibly have come up with that?

Good point. The media has responded so passionately to your album. What has it been like to be back in the spotlight in such a big way?
It’s so weird how quickly things move. The last time I put out a record it was very different how people shared music and I’m on Twitter now, which is strange for me. I was on Friendster when I was single for a couple of months. Then I committed Friendster suicide. "I’m gone!" I said and I wrote a speech. It’s weird because I am accessible to people on Twitter and I can choose to read good things or mean things and people can reach out to me directly and tell me how much they hate me or love the song. It’s a very strange new paradigm as an artist to find yourself among this kind of connectivity. It’s weird.

What's it been like for you to read the mean stuff?
If you’re going to accept the good stuff in, then you have to accept the bad stuff in a way. It cancels it out. Dare I go slumming it in the comments section. I mean are you kidding me? It’s so negative down there in the comments! I made the mistake of doing that on Yahoo, on the video link. It was like a bunch of anti-gay slurs in the comments section in regards to my video. It felt so inappropriate. I guess when a couple million people see your videos, they’re going to have varying opinions on it.

The internet is an evil place.
It can get pretty dark. For me, I can stay above the line with the comments.

You’ve talked so much about your insomnia and grief from the past few years. Could you have come out with “The Voyager” without having gone through all that?
I would like to think so. Insomnia is a very prevalent issue. It’s a women’s health issue and I chose to talk about it because so many people have experienced it to varying degrees. For me, I’m doing great now but it took a lot of work to figure out how to get back to sleep. I had to change some of my habits. I developed some pretty bad sleep ritual habits. It took me a little while to correct that behavior. It certainly informed the songs but I hope to God I never have to go through that again. It was very disruptive.

Is that why you bring up the cosmos in terms of “The Voyager”?
I mean, I’m always … I can’t say I’m always considering the universe. That would be the weirdest! Like, "I’m always considering the universe!" But certainly, we all wonder what is beyond and when you lose a loved one, I think part of the grieving process includes where that person might have gone or if you’ll ever see them again. I think it forces you to look up to the sky, to the cosmos.

Maybe that's why the characters in this album seem different than in your earlier solo work. They're like grown-up versions of the ones in your last album.
I’ll say this: I don’t want to be one of those old little girls. I’m just writing about different things. I’m 38 years old. I’ve chosen to write about the things that feel relevant to me as a woman in her -- dare I say -- late-30s.

Yeah! Your career has gone through so many different stages. What do you get approached about the most?
It varies. When I think people like one record more than the other, then someone will surprise me. But, in the end it all comes back to "Troop Beverly Hills."

And that was my next question...
Regardless of my creative output, it always goes back to "Cookie Time," my proudest work.

What’s your favorite memory from filming that movie?
I don’t remember a whole lot from that movie, but I did end up with a couple of Wilderness Girls T-shirts that I still wear on special occasions.

You could wear that under your rainbow suit.
Exactly. I should. I will. It’s my secret superhero, superpowered shirt.

What are you wearing now, if not the suit?
Two days ago in Louisville, Kentucky I bought a purple kimono robe and matching thongs, like shoes. So I’m considering wearing that on stage tonight, adding the purple robe to my ensemble ... it could be a disaster.

Jenny Lewis' "The Voyager" is out July 29 and is available to stream right now on NPR.