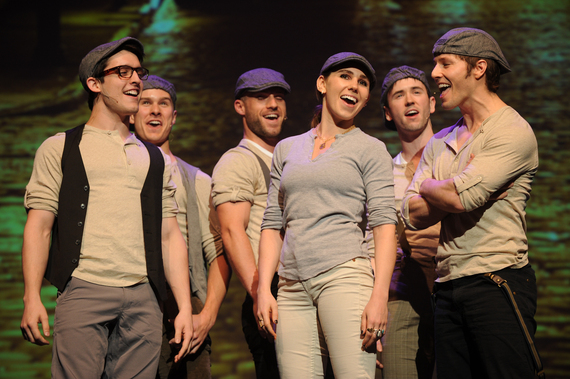 Zosia Mamet performs a number from Newsies at Miscast. (Photo by Dooleyvision/Fotobuddy©2014)

Jeremy Jordan is having a hard time getting over what happened last year. You see, at the annual Miscast Gala in 2013, which is presented by MCC Theater, Jordan sang the Smash hit "Let Me Be Your Star," when Jonathan Groff came onstage and stole his thunder. (Both men also sported blonde wigs so the gag was supposedly planned.)

However at this year's event, which was held on Monday night at the Hammerstein Ballroom, Jordan sought revenge. He recalled how he and Groff audition for many of the same projects, including the animated film Frozen, in which Groff voiced the part of Kristoff. "I could do Jonathan's big song from Frozen!" Jordan exclaimed. "Oh wait, he didn't get a big song." So Jordan performed "the next best thing,"Let It Go." Mimicking Princess Elsa's snow-making powers with his hands, Jordan nailed every note.

The gimmick behind the Miscast gala is actors perform numbers that they are totally wrong for. Men can play women, women can play men; anything is game. Sasha Allen, who appeared in Hair on Broadway and in the cult-favorite film Camp, opened the show with the Four Seasons' "Can't Take My Eyes Off You." "I will never be a Jersey Boy," Allen joked. "I'm a black female."

Steven Pasquale, currently starring on in The Bridges of Madison County, performed from Carousel, "which I will never be cast in." While Pasquale might be right for some of the male characters in the show, he performed Nettie Fowler's big song "You'll Never Walk Alone" in some of the sweetest dulcet tenor tones around. As the event wrapped up, buzzing about Pasquale's performance could be heard throughout the ballroom.

All the men continued the theme of playing female roles. Lin-Manuel Miranda and Raúl Esparza played Anita and Maria respectively in the duet "A Boy Like That" from West Side Story, while the evening also boasted two Fanny Brices: Esparza also sang "My Man" and Joey Taranto did "Let Me Be Your Star," both from Funny Girl. "Hey mom, I'm not in the bathroom anymore!" Taranto exclaimed, after recalling his young years pretending to be Barbra Streisand in front of the mirror.

Marc Kudisch, who just concluded his run in Hand to God at MCC, brought up his friend and 9 to 5 co-star Allison Janney, who was honored at the event, for his number "Popular" from Wicked. Janney sat center stage while Kudisch paraded around her, and finished the number in an (impressive) full split.

"My whole life has been a miscast," Tony winner Billy Porter said, explaining his early years in musical theater in Pittsburg playing roles like Fagin in Oliver. Porter took on Mama Rose, singing "Everything's Coming Up Roses" from Gypsy. Porter is currently on Broadway in the role that won him a Tony in Kinky Boots. 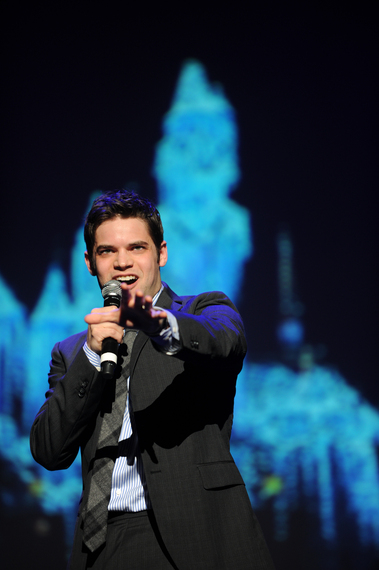 And the women decided to do some cross-dressing as well. Nicole Parker, a Miscast mainstay who regularly performs at the gala, sang "I Believe," Elder Price's big number from The Book of Mormon, and later on, she shared some of her signature impressions of Ellen DeGeneres, Celine Dion, Zooey Deschanel, Lena Dunham, Patti LuPone and Pink while singing "Neverland" from Peter Pan. (She did the number as a sort of joke try-out for these celebrities for the upcoming live broadcast of Peter Pan on NBC.) Allen also performed Jean Valjean's second act ballad "Bring Him Home" from Les Misérables, while Girls star Zosia Mamet had perhaps one of the most memorable numbers of the evening. Mamet, who appeared in her first play Really Really with MCC, wore coveralls to rehearsal one day, and a photo of her outfit was shared with casting director and MCC co-artistic director Bernard Telsey. "Well, she has to do Newsies," Mamet remembers of Telsey's reaction. So Mamet donned a newsboy cap and joined former Newsies cast members in "Seize the Day" from the Tony-winning musical. (She even learned and performed much of the number's original choreography.)

Jordan concluded the evening's presentation, still jokingly harping on some of his bitterness toward Groff, and delivered a mash-up of "Over the Rainbow" from The Wizard of Oz and "Home" from The Wiz. Nailing it again, Jordan certainly had the last laugh.