Jeremy Lin's legal team has sent a flurry of cease-and-desist letters to medical marijuana dispensaries offering "Linsanity" brand pot, and a few shops have already complied, a lawyer for the New York Knicks star told The Huffington Post on Wednesday.

"Their enthusiasm for Jeremy Lin got ahead of their understanding of the law," said Pamela Deese of the Washington, D.C., firm Arent Fox.

Although Deese would not name the companies, HuffPost found at least three California dispensaries that have stopped their doobie-ous enterprise.

The owner of 420 Specialists of Moreno Valley confirmed that he had received the notice and deleted Linsanity from the menu a week and a half ago. "They also wanted me to write a letter of apology," Josh Leibowitz said Thursday, adding that he hasn't done so yet.

Gourmet Green Room of West Los Angeles would only say that it had replaced Linsanity with Insanity.

L.A. Confidential Caregivers in Hollywood, which was listed in a Marijuana.com post about Linsanity sellers, seems to have removed Linsanity from its menu as well. We reached out to L.A. Confidential Thursday morning, and we'll provide an update if it responds.

Word of Linsanity reefer madness spread when rappers Rick Ross and Stalley tweeted in early March about Linsanity OG cannabis, providing photos. As the jar in one photo indicated, Linsanity OG was priced at $60 for an eighth of an ounce.

That was back when Linsanity, the popular label for Lin's rise from benchwarmer to star, had apparently already peaked. But now that the Knicks have won five straight as of Thursday, with Lin as the fourth-quarter hero in Wednesday's victory, companies might be looking to cash in again.

There were an estimated 1,000 state-legalized pot shops in California before a recent federal crackdown. Five or six are violating Lin's rights, according to the NBA player's attorney. "We've identified those entities," said Deese, who also wouldn't share their names.

In a related matter, Deese said that cease-and-desist letters to 24 entities who applied for a trademark on Linsanity or some other Lin term have been effective in weeding out claimants. Many applicants said they were sorry and withdrew their claim, according to the lawyer.

"You can't file a trademark when there's a clear connection to someone else's name," Deese said. "In this case, Jeremy Lin has the right to his name and related names and marks, as well as his signature, voice and likeness. That's all part of his intellectual property."

Lin filed his own claim for Linsanity on Feb. 13, asserting his rights to sell merchandise from underwear to beverage sleeves with that mark. Ganja did not make the list. 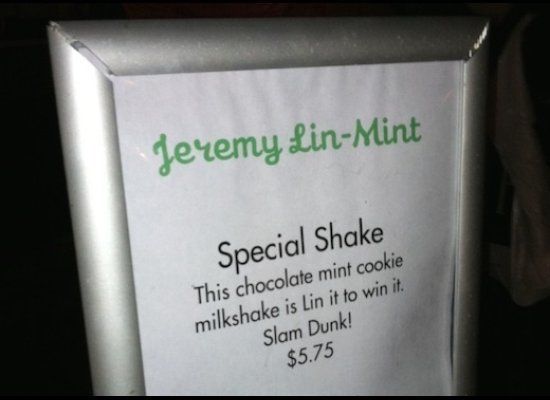