From sleeping on the couch...to the Trump Towers!

Lin will be subletting an apartment at Trump Towers in White Plains of former Golden State Warriors teammate, and ex-Knick David Lee, The New York Post reports. A source at the building told The Post, "It is very common for new Knicks to stay at the Trump Tower in White Plains while they get acclimated to the city,” adding, "The Knicks keep players there when they are new. Sometimes they stay, sometimes they find places on their own there. Amar'e was there before getting his place. Every Knick player is there before finding their own apartment."

And whether Lin decides to stay in the apartment, the luxe pad in the 35-story building in Westchester (with "white glove service and 24/7 valet parking" and "Brazilian cherry wood cabinetry") is a far cry from his brother's couch in the Lower East Side, and the couch of teammate and friend Landry Fields, both places where Lin crashed when Linsanity took hold of the city.

On Sunday, Fields tweeted this picture of the couch, writing: "Ladies and gentleman, the one and only couch made famous by @JLin7! Let the bidding begin!" 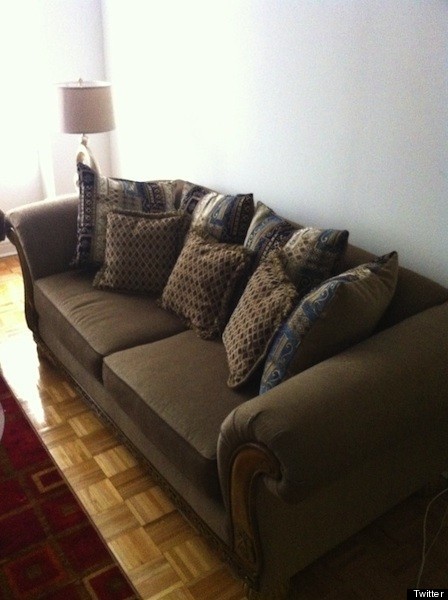 Here's a video of the building Lin will be crashing at now: