Rampant unemployment, rising food prices, a collapsed housing market, ballooning debt -- to Jeremy Rifkin, the American economist and president of the Foundation on Economic Trends, these are not simply symptoms of a temporary economic malaise. Rather, they are signs that the current world order -- long infused with and defined by fossil fuels -- is collapsing around us.

In its place, decentralized systems of advanced, clean-energy production and digital power distribution are already starting to rise, Rifkin suggests, and they will reorder not just the way we turn on our lights, but how whole economies -- indeed, whole societies -- operate. Why? In a nutshell, Rifkin argues that as the ability to tap, generate and distribute power shifts from the exclusive province of governments and lease-holding corporations toward individual actors and communities armed increasingly with solar panels and wind turbines and smart grids, so too will bedrock relationships between producer and consumer, the government and the governed, be forever changed.

In such a world of democratized energy, cooperation trumps control, and the drive toward productivity is replaced by a quest for sustainability.

Such are the central themes that animate Rifkin's new book, the The Third Industrial Revolution: How Lateral Power Is Transforming Energy, the Economy, and the World, which hits bookstores and eReaders on Tuesday. This week, The Huffington Post is hosting two excerpts of Rifkin's tome -- the first of which is available here.

Of course, revolutions imply conflict by their very nature, and Rifkin concedes that the transformation he envisions is by no means guaranteed. Americans, for example, lag well behind Europeans in recognizing what Rifkin considers to be the waning, carbon-driven world order, and in taking steps to embrace and implement the new one.

"One of the reasons an overarching new economic game plan has never been rolled out is not just because we need to cut back public spending and reduce government deficits," Rifkin said in a two-part Q&A with HuffPost, "but because the administration is missing, to quote former president George W. Bush, the 'vision thing.'"

"What Obama is lacking," he added, "is a narrative."

The full first installment of our Q&A is below. 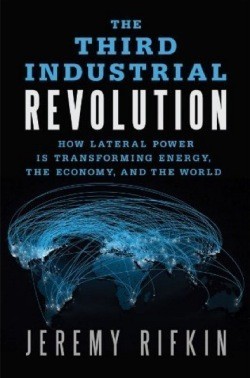 You suggest that the Third Industrial Revolution will be the last of the great industrial revolutions. Why?

If the industrial era emphasized the values of rigid discipline and hard work, the top-down flow of authority, the importance of financial capital, the workings of the marketplace and private property relations, the collaborative era is more about creative play, peer-to-peer interactivity, social capital, participation in open commons and access to global networks.

The Third Industrial Revolution will move apace over the next several decades, probably peaking around 2050, and plateau in the second half of the 21st century. Already, in the shadow of its ascending bell curve, we can see a new economic era that will take us beyond the industrious mode that characterized the last two centuries of economic development and into a collaborative way of life. The metamorphosis from an industrial to a collaborative revolution represents one of the great turning points in economic history.

In your book, you introduce the notion of "lateral power," suggesting that it will soon displace traditional top-down power relationships and pave the way for a more distributed form of capitalism. What’s a shorthand way for understanding your notion of lateral power?

The democratization of energy has profound implications for how we orchestrate the entirety of human life in the coming century. We are entering the era of distributed capitalism. To understand how the new Third Industrial Revolution infrastructure is likely to dramatically change the distribution of economic, political and social power in the 21st century, it is helpful to step back and examine how the fossil fuel–based First and Second Industrial Revolutions reordered power relations over the course of the nineteenth and twentieth centuries.

Fossil fuels -- coal, oil and natural gas -- are elite energies for the simple reason that they are found only in select places. They require a significant military investment to secure their access and continual geopolitical management to assure their availability. They also require centralized, top-down command and control systems and massive concentrations of capital to move them from underground to the end users. The ability to concentrate capital -- the essence of modern capitalism -- is critical to the effective performance of the system as a whole. The centralized energy infrastructure, in turn, sets the conditions for the rest of the economy, encouraging similar business models across every sector.

The emerging Third Industrial Revolution, by contrast, is organized around distributed renewable energies that are found everywhere and are, for the most part, free -- sun, wind, hydro, geothermal heat, biomass and ocean waves and tides. These dispersed energies will be collected at millions of local sites and then bundled and shared with others over an energy internet to achieve optimum energy levels and maintain a high-performing, sustainable economy. The distributed and collaborative nature of the TIR energies and infrastructure favors lateral rather than hierarchical command and control mechanisms. This new lateral energy regime, in turn, establishes the organizational model for the countless economic activities that multiply from it. In the new era, providers and users aggregate nodally in vast networks and carry on commerce and trade in commercial arenas that function more like commons than markets. A more distributed and collaborative industrial revolution, in turn, invariably leads to a more distributed and collaborative sharing of the productive wealth generated by society.

You argue that the "single most important factor in raising hundreds of millions of people out of poverty is having reliable and affordable access to green electricity." But nascent economic powerhouses in the developing world -- China, India, and others -- are largely following the Western model of fueling and growing their economies with cheap, fossil-fuel based electricity. How does that dynamic get altered?

Universal access to electricity is the indispensable starting point for improving the lives of the poorest populations of the world. Because renewable energy -- solar, wind, geothermal, hydro and biomass -- is widely distributed, a Third Industrial Revolution is ideally suited to take off in the developing world. Although a lack of infrastructure is often viewed as an impediment to development, what we are finding is that, because many developing nations are not saddled with an aging electrical grid, they can potentially "leapfrog" into a Third Industrial Revolution. In other words, by building a new, distributed electricity system from scratch -- rather than continuing to patch up an old and outworn grid -- developing countries significantly reduce the time and expense in transitioning into a new energy era. Moreover, because of the distributed nature of the Third Industrial Revolution infrastructure, risk can be more widely diffused, with localities and regions pooling resources to establish local grid networks and then connecting with other nodes across regions. This is the very essence of lateral power.

Other parts of the globe, particularly Europe, appear to grasp the trends and solutions you suggest in your book. Why are Americans lagging in this regard?

One of the reasons an overarching new economic game plan has never been rolled out is not just because we need to cut back public spending and reduce government deficits, but because the administration is missing, to quote former president George W. Bush, the "vision thing." Whenever President Obama mentions his green economic recovery, he rattles off a laundry list of programs and initiatives his administration is either doing or proposing. The president also takes every opportunity to visit a solar or wind turbine park, a factory manufacturing solar panels or a car company testing electric vehicles to demonstrate his sincere commitment to a green economic future.

What Obama is lacking is a narrative. We are left with a collection of pilot projects and siloed programs, none of which connects with the others to tell a compelling story of a new economic vision for the world. We’re strapped with a lot of dead-end initiatives, wasting billions of dollars of taxpayer money with nothing to show for it. If President Obama clearly understood the underlying dynamics of the five-pillar infrastructure of the next great industrial revolution and how the parts connect, he might have been able to sell the American public on a comprehensive economic plan for the country’s future.

Another series of questions and another excerpt from Jeremy Rifkin's new book will be available on Thursday.