And you thought zombies were only in it for brains.

A zombie whose job is to stalk the streets of New York City put his undead instincts on hold Saturday to save a cat that was darting through traffic. What 22-year-old Jeremy Zelkowitz didn't know is that this particular cat -- named Disaster -- had been missing from his NYPD cop owner for two years, the New York Daily News reports.

Zelkowitz wears a blood-colored jacket and dark makeup to attract passersby to Times Scare, a house of horrors near Times Square in Manhattan. So onlookers were surprised to see him in costume, chasing a black cat down the street on Saturday.

Disaster had been moving through traffic, and darting into nearby buildings, but kept getting shooed away, Zelkowitz told the paper. After a chase, Zelkowitz was able to catch Disaster and put him in a cab to the BluePearl Veterinarian clinic.

Luckily, Disaster had a microchip with all his owner's information on it. Hospital staff -- who told HuffPost Weird News that the feline is healthy -- found that the owner was New York City cop Jimmy Helliesen, who hadn't seen Disaster for two years. Disaster had taken a trip from Helliesen's home in Brooklyn, across a river and all the way to Times Square.

"I guess he wanted the bright lights and the big city -- I was shocked to see him," Helliesen told HuffPost Weird News. "I always assumed a neighbor took him in. He's a friendly cat. I thought someone was playing a joke on me when I got the call."

Helliesen takes in stray cats that he picks up on patrol, but says he's looking for other people who can provide good homes for the felines, since his wife won't allow him to take in any more than the nine he already has. 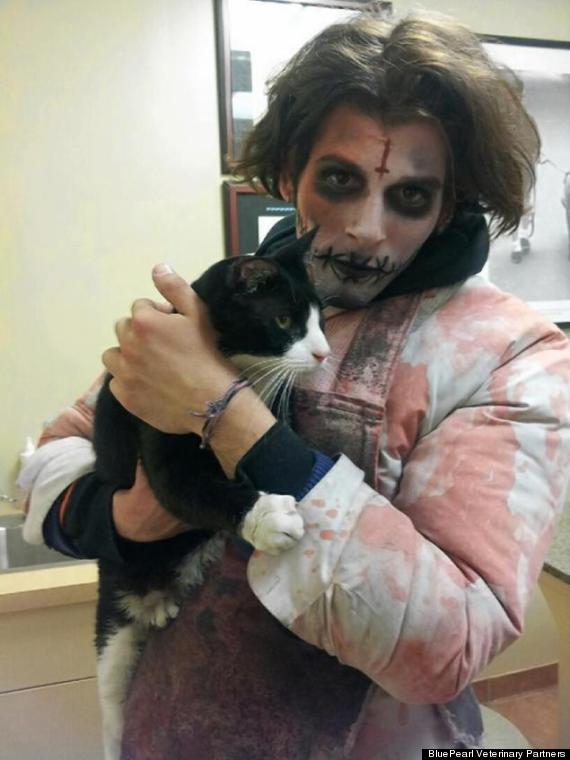 Weird NewsZombie Apocalypse Animals In The News
Go To Homepage