Jeroen Bisscheroux's "POOL, loss of color" might look like a mere Kodak opportunity. From the perfect angle, the massive, 50-foot long, three-dimensional optical illusion gives the appearance of a deep swimming pool. Stand on its edges and you appear to be staring into a body of water. Recline on its surface and you look as though you're doing the back float in the deep end. 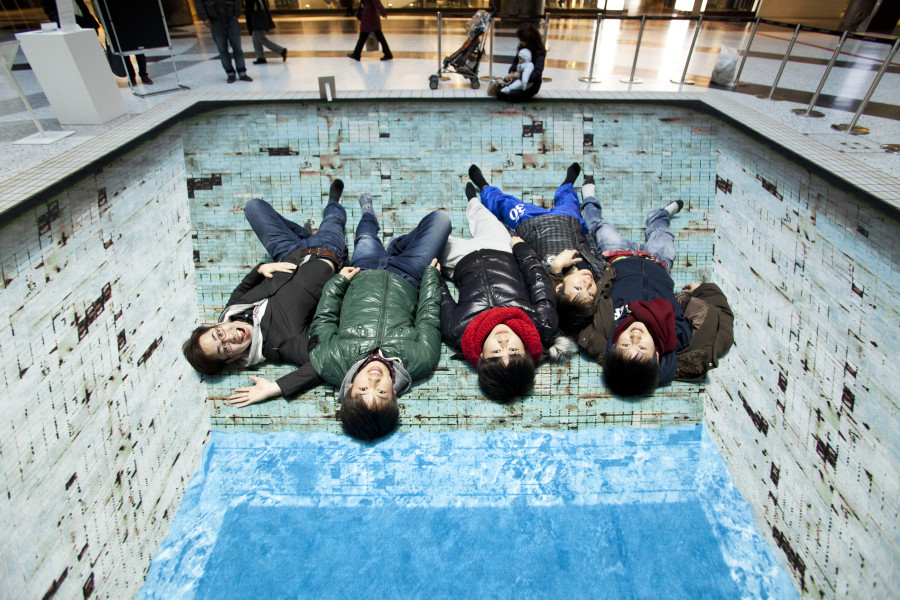 But the hypnotic pool is actually a painting...on a flat carpet. Bisscheroux created the piece this year in Osaka, Japan in an effort to bring the country's struggles with disaster -- like the tsunami in the Sendai region and the nuclear meltdown in Fukushima -- back into the limelight. According to his website, the pool is meant to abstractly transform the two disasters to "human scale," proving that tragic occurrences happening across the globe are just as relevant and impactful to human beings as those calamities happening in your backyard.

Essentially, it's all about perspective -- whether we're talking about the skewed image of a 3D optical illusion or the biased perception of a disinterested individual.

"It is a translation of the threat of an even greater tragedy that hangs over our heads," Bisscheroux explains in a project statement. "The problems surrounding the nuclear power plant in Fukushima are far from being resolved. 'POOL, loss of color' must reiterate this and change the focus, emphasizing the timeliness of events. Both in Japan, but especially in Western Europe, where the events in Fukushima have faded into the background."

Check out images from the spellbinding installation below and let us know your thoughts on Bisscheroux's clever statement in the comments.