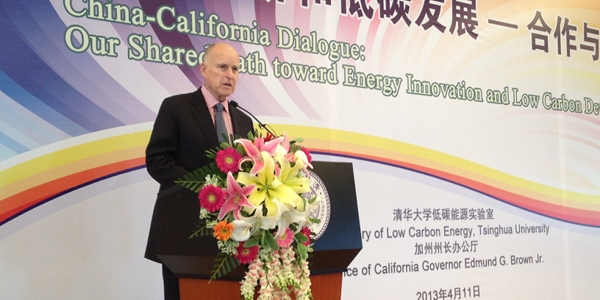 Free of nation-state controversies over such matters as North Korea's nuclear program or naval competition in the South China Sea, while Obama is seeking a geopolitical pivot to project U.S. power toward China, Brown is seeking a different pivot through energy conservation away from the gathering threat of climate change. Obama faces hazardous choices as he watches the rise of China, while Brown can perhaps work with both powers, which together account for 40 percent of the world's carbon emissions, on a cooperative approach to extreme climate change.

However the drama plays out, it will depend in both countries on popular movements to pressure their leadership against the disastrous health impacts of polluted skies, rivers and soil. It will require an important role for climate scientists in questioning the model of "development" and "growth" based on exploiting fossil fuels. And it will require a resolution of the issues of environmental justice that divide the First World from the Third.

Whatever his stands on other issues may be, Brown can lay claim to national and global leadership on renewable energy and conservation policy. Brown also has experience navigating the stormy seas of the environmental movement. He spoke at the 1979 "No Nukes" rally, opposed nuclear power plants, and created California's energy efficiency and solar programs through his California Energy Commission. Some of the early "Brownies" went to China, including Bob Weisenmuller, chairman of the CEC, and Dan Richard, who heads Brown's effort at high-speed rail.

So it is no surprise that Brown increasingly is sounding the alarm over the climate crisis, most recently based on articles in the The Atlantic and Nature. The first, reported by the Peace and Justice Resource Center on March 8, was based on a CIA prediction of global security threats due to climate change, which Brown sent out to his circle seeking advice. The article in Nature, based on a consensus among climate scientists, was authored by Anthony Barnosky at UC Berkeley. To Barnosky's surprise, Brown emailed him directly and followed up with a phone call, urging him to update and circulate a petition for global signatures. The original article, by Barnosky and other scientists, suggests that the global ecosystem is approaching an abrupt and irreversible shift.

An Alternative to Cold War with China

For traveling to China, Brown was chastised by political writer George Skelton and many political insiders for leaving urgent state priorities behind, including energy related issues, to go off on a two-week junket that cost its 30 members $10,000 apiece. Only one independent environmentalist joined the trip, Michael Schmitz, from an Oakland-based group pushing local and state government sustainability programs.

Brown, however, shows every sign of continuing to expand his leadership on renewables and energy conservation, and China figures prominently in his emerging plan. He already is plotting a more rapid pace toward his goal of 33 percent of California's electricity from renewables by 2020. A huge increase in the number of "green cars" produced in California is one option under consideration.

Brown is intent on going back, or at least encouraging a constant stream of emissaries and Chinese visitors, plus staying engaged through trans-Pacific conference calls. Future trips will be privately funded through foundations.

Three agreements were signed in China, and a fourth is being worked on, according to a Brown policy adviser who helped organize the trip. The agreements "were less detailed than we initially proposed," he said, "but the good news is that the Chinese have followed-up and are eager to put 'flesh on the bones' of our initial agreements."

The three draft agreements are with:

An agreement still in the works is with the National Development and Reform Commission, a super-ministry supervising climate and greenhouse gas emissions.

China is "pretty motivated to make meaningful changes," the Brown aide said. "We want to learn from China and share with China on ways to make progress." Fifty years ago, for example, the Los Angeles air basin was toxic with killer smog, too. But a citizen outcry against smog led to air quality districts and pollution control standards in the Brown years. While LA's air remains polluted, there were historically significant smog reductions without sliding into an economic recession, the specter the Chinese fear.

"There's tremendous pressure on them [from the public]," the aide said. "But it's a struggle. The coal companies, and manufacturing and oil companies are state-owned but the government has a hard time enforcing its own laws because they say they don't have revenue for technologies like scrubbers.

"So we ask them, what do you need to prove that it's cost effective? Our answer is that every time we pass a new energy standard here, the computer people or the refrigerator people say they can't afford it, then time after time we prove you can."

On a national level, Detroit's auto industry similarly fought against fuel efficiency standards in the early 1970s, only to find that they could reduce pollution and remain competitive with increased emissions standards.

"Low-carbon development" is China's euphemism for economic development that limits green house gas emissions. They refuse to accept Western-inspired restrictions on development in the name of environmentalism, while at the same time facing growing rage in their own cities over the severe health consequences of unregulated pollution of coal plants, cars and buses. The reforms they need to undertake are potentially overwhelming: higher fuel efficiency, scrubbers on coal plants, control of port emissions and transportation. "They are really interested in building appliance standards," said the aide, while another important goal is the export of California's energy technology in the agricultural sector.

Brown is deeply interested in vehicle electrification and high-speed rail, which he promoted in speeches and meetings while in China. The governor noted that China has more high-speed rail than the rest of the world combined. "We are interested in trying to do what you guys already have done," he said.

According to Brown's aide, "The good news is that they move very fast once you get an agreement, and they are pretty interested."

Another positive factor is that China has no global warming denier faction. "The totally get it," said Brown's aide, "The differences are over being in a very different place economically, with per-capita emissions still higher in the US than China."

The Chinese want more value-added industry, but their economic growth still is driven by polluters, with 70 percent of energy from coal and massive industrial inefficiency. "Jerry would say that, believe it or not, half the American Congress doesn't believe in global warming," which paralyses progress on the federal level.

China's current five-year plan sets mandatory "carbon intensity" reductions as a unit of gross domestic product (GDP), allowing them to become more efficient as they grow. While the West wants targeted goals, the Chinese plan greenhouse gas reductions based on every unit of economic growth. In the Chinese view, they are sacrificing annual GDP growth for environmental purposes. Brown is suited to understand, because he himself proposes compromises on the altar of corporate growth, most recently rollbacks on Proposition 65 and California's environmental protection laws. The legislature and courts may or may not block him, but the initiative toward China is far more strategic in importance than skirmishes over existing California environmental laws, even hard-won ones. The fate of the planet may well rest on whether Chinese and America energy policies are turned around.

The scope of China's plan is simply beyond most imaginations. Michael Schmitz, the green-cities advocate on Brown's delegation, speaks of 350 million Chinese migrating to cities in the next two decades, the greatest human migration in history. At breakneck speed, the Chinese are erecting whole new sustainable cities of 500,000 population, five urban areas are launching cap-and-trade programs, and ten are competing to put the most electric vehicles on the road. A half-million alternative-fuel cars are being produced in three years. While Schmitz' coalition has worked in hundreds of cities in over 80 countries, the scale of China is far greater. Already China leads the world in clean energy investment, up 20 percent in 2012 alone; China last year attracted $65 billion in private investments in renewables to America's $35 billion and Germany's $22 billion, according to Pew.

Will any of this activity get the world off the path to mass destruction? Is China going green? Not any time soon, but consider this: If China begins to move in the direction of California's standards, it could mean a global shift with serious consequences, just as California's leadership domestically was the early source of America's energy savings and fledgling green energy economy.

The Fate of the Planet

"They loved him," Brown's aide said of the Chinese response. "He's still Jerry Brown, unscripted, leading off every meeting with climate change even when it wasn't on the agenda."

But a strategy of gradual superpower reductions will not stop the slide into climate chaos; only mark a turning point in managing the disaster, which may be "abrupt" and "irreversible" according to the reports Brown is studying. The Cold War nuclear arms race may serve as a useful comparison in crisis management. In either case, a catastrophe will kill millions of innocent people and deeply damage the ecosystems on which all life depends. It took "Ban the Bomb" marches, a health outcry about Strontium 90 in mother's milk, the trauma of the Cuban missile crisis, the 1980s nuclear-freeze movement, and repeated nuclear meltdowns to create modest systems of nuclear weapons management. The crisis is a permanent one for the human race, since the nuclear genie is out of the bottle. The climate crisis is more hazardous in the sense that it is beyond the control of rational managers, accelerating its own logic, and likely to escalate spontaneously.

In time, the US-USSR relationship was "rationalized," which may be the model needed between the US and China today. That will require protests, uprisings and campaigns in both countries until more courageous leadership emerges. In the meanwhile, regional struggles from Los Angeles to Guangdong may be the catalysts.

As these efforts evolve they will impact the larger relationship between the Old Superpower and the New. It is just possible that during the Obama-Xi summit this week the issue of energy and climate change will come up. Brown would not say it this way, but his policies are designed to encourage a mutual withdrawal from the superpower addiction to fossil fuels. In a parallel with the nuclear weapons standoff, a mutual, negotiated reduction is ultimately easier than expecting one side, or bloc, to unilaterally withdrawing from its resource addiction.

Brown and Obama therefore need to take unilateral steps toward carbon reduction now, but strategically they need a partnership with the Chinese. Otherwise, conservative forces in the US will argue that China is gaining a strategic economic advantage if the US sets a higher price on carbon. But if Brown's initiative with China leads to mutual carbon reductions, the possibility of a larger US-China energy "deal" will become greater. Obama therefore needs to back Brown's energy pivot while he wrangles with the Chinese over his strategic pivot toward Asia. A pivot toward renewables and conservation would seem more important to many people than adding more aircraft carriers in the South China Sea. But if the California energy initiative helps promote a greater US-China energy deal, that might help lessen the dangers of a new Cold War by putting mutual energy agreements first.

For example, the US and China could agree to control methane leaks from oil and gas wells, and phase out the HFC's in industrial waste that trap 11,000 times as much heat as carbon dioxide. Whatever concrete gains are achieved, of course, are within a race against the ticking ecological clock. But the global environmental movement, with allies like Brown, can influence the transition to a future unforeseen in human history.