How high are you right now?

Good, because Florida man Tom Haupert wants to show you his horseradish jar, and it's got the spitting image of the late Grateful Dead frontman Jerry Garcia on it, man.

On the heels of the 17th anniversary of Garcia's death -- Aug. 9, 1995 -- Haupert sent The Huffington Post a picture of his jar, which sits as a shrine in his refrigerator, right next to the Bud Light. 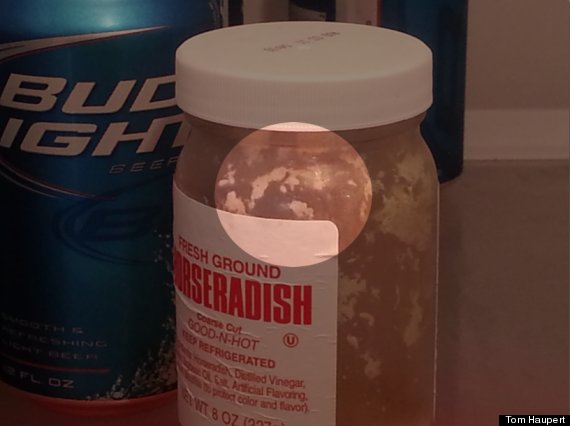 He recently noticed the visage when he opened the fridge for a drink of filtered water in the morning.

"It was amazing -- and it still looks perfect," Haupert said. "[The picture] is stuck on the side. At some point the horseradish started dripping down and just stayed like that."

Fine, fine, but how high were you when you saw Jerry?

Of course, 50-year-old Haupert's been a Dead Head for years and has seen 43 live shows -- including nine that featured Garcia -- so he admits he might be predisposed to seeing Garcia in everything.

As for the jar, Haupert's thinking of selling it on eBay, or starting a website called JerryInAJar.com. But he's worried about hurricane season.

"I don't know what would happen if I lost power to the refrigerator," he said.

He's not the only one who's seen crazy pictures in strange objects. In 2011, people saw a broad range of sacred sightings in their food and other objects, from Jesus on a tea towel, to Mary in a tortilla.