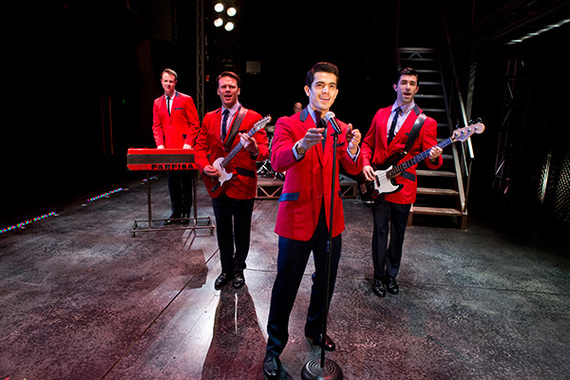 OK, I didn't want to see Jersey Boys, the play or movie. It just seemed like something my mom would have loved, and since I don't have one Frankie Valli and the Four Seasons song in my music library, I thought, meh.

Well, smack me on the forehead and call me an idiot.

What a great play (the movie on the other-hand, meh).

Living in Los Angeles, if it's a musical, it's at the Pantages. But, I live in Long Beach, CA, outside of Los Angeles, in between it and Orange County. And Orange County has quite the venue in the Segerstrom Performing Arts Center. The area that was home to South Coast Repertory has grown in to a chic area of fine dining, theatre, music hall and world class stages. It is here the play calls home until July 13th when it moves on to San Jose, CA, Arizona and then back to yes, the Pantages in October. A complete tour schedule is at the show's website.

The marvelous surprise of the play was not just how many of the songs I knew, but the diversity of the audience and how many songs they knew. The play breaks the third wall from the get-go (and it succeeds in doing so where the movie failed at it), with Nicolas Dromard's Tommy DeVito character reminding the audience that the song Oh What a Night was as popular 40 years after its release as it was then.

"The play is the group's story, by far," he told me on my syndicated radio show, "but it's also four very individual stories. Tommy, who I play, sees it only one way: he created the band, nurtured the band, that there would be no band without him. My character never waivers, and I think he is pretty honest with everyone about who he is or was from the beginning," he stated.

When I was a wee lad (ya, right) at Long Beach City College in theatre we had to do tech as part of the program. My semester for makeup the production was Roshomon. I had never heard of the the Akira Kurosawa film but soon became very familiar with the story. A robbery and murder takes place and some are killed. There's a trial, where the witnesses are called, even the ghosts of the dead. The premise of the film and play is that everyone is telling the truth--their truth--illustrating that the truth is relative to who you are and your perception of events.

Jersey Boys illustrates that perfectly. In the late 1950s and then 1960s Devito did form the group with a very young Frankie Valli, Nick Massi and then Bob Gaudio (who had written "Short Shorts" as a one hit wonder and then was lamenting away at 17, Oy). The four went through many names and incarnations (18 of them) and just couldn't hit big. Then with the help of OVERTLY GAY, did I mention just how OVERTLY GAY they portray record producer Bob Crew, but with his help, the hits begin. The movie does the same FYI. Now, I am a stereotype. I'm so gay you could pass me at night sitting in a field in the dark with no moon in the fog and as you whiz by remark, "did we just pass a gay person?" That's how gay I am. And yet, even I'm not THAT gay. Barry Anderson does fine with the role and adds a small realness to it, but it's camp all the way for that part. 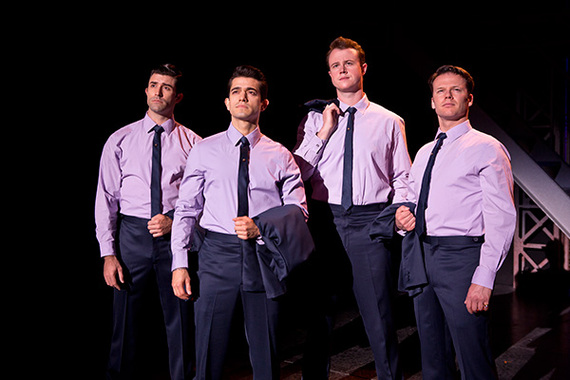 Then again, each is an overblown portrayal, that's the nature of stage. Hayden Milanes plays Valli six shows a week and Shaun Taylor-Corbett (whom I saw) two performances a week. I can't imagine someone being better than Corbett, just different. Quinn VanAntwerp brings the true everyman feel to the play and we see it was he and Frankie that really wanted the success while minding the business. Dromard's Tommy drives the play and while the spotlight is on Valli there's a lot to be said for his driving force in real life, and Dromard's performance in the play. Quinn VanAntwerp's portrayal of Gaudio is spot-on, the level-headed one, the everyman. Adam Zelasko is perfect as the distractingly handsome Nick Massi, who one day left the group and never looked back. Marlanna Dunn as Valli's wife steals every scene she's in. Her wise-cracking fiery take on being the wife of a traveling singer is spot-on.

The show is told from four points of view, no one saying the other's is wrong, but illustrating how we all see things as we must.

But let's not pretend that this isn't just about the music, because it is. Yes, there's a lot more acting than in most musicals, and that's refreshing. Good acting, no less. But it's the music. And how on Earth did I know EVERY song. All of them. I simply didn't realize how engrained in American culture this group is. Prior to the Beatles, they were the most successful recording artists in America. They've sold over 100 million records. And Valli himself still performs, in fact, he is performing July 4th, 2014 for the PBS 4th of July Special at the White House. As the play says, he's the "energizer bunny" of music. At 80, he wont' quit.

And why would he? The play is bringing the music back yet again. Fans young and old are getting a great night of theater and their story, being glamorized, has now been immortalized for stage and screen.

They didn't end up close friends, but they ended up bonded as only that kind of experience can do. And while the personal relationships may have been fractured, their families may have suffered and paid a price, there can be no doubt these Jersey Boys are a true part of American musical history. The last time they were together on stage was their induction to the Rock and Roll Hall of Fame, the original Four Seasons. But the play, and now movie, will keep them together forever.

See the play at the Segerstrom Center for the Arts or on tour throughout the country.