Do you know this feeling, when you unexpectedly stumble upon a hidden treasure of physical or non-physical nature and it fundamentally changes, but completes, your day? In this instance this author took an inquisitive peek into the windows of the building that is 80 Grand Street, across from Paulus Hook Park in Downtown Jersey City, and decided to find out what the auspiciously illuminated colors mean.

Entering the elegantly renovated rooms of the Museum of Russian Art (MORA), the secret is revealed quickly. The pieces hanging on the walls show a refined sense for classical painting technique, extensive schooling, an eye for historical references, and a strong feel for European art-symbolism. The Museum of Russian Art (MORA) is exhibiting two contemporary Russian/Eastern European artists right now that are taking the viewer on a stunning travel to strangely familiar places...

Voskanjan Andrey Valerevich, in artistic circles better known as Gasoyan, was born in Yerevan, Armenia, in 1981. A former republic of the Soviet Union, Armenia is located at the crossroads of Western Asia and Eastern Europe. Gasoyan graduated from the Yerevan State Art Academy in 2004 and then continued studying with the prestigious Moscow State Art V.I. Surikov College, focusing on monumental painting. Although Gasoyan is constantly producing artwork, he is also passing on his skills and knowledge by teaching at the Academic School of Design in Moscow. In 2008 he was named the laureate of the Art-Week Moscow competition and his works are appreciated by private collectors and galleries all over Europe and Russia.

Gasoyan noticeably received his main art schooling after the collapse of the Soviet empire. His education made him a young Russian painter with a strong appreciation for the great European masters of the earlier 20th century, away from the doctrine of Socialist Realism that influenced, voluntarily and involuntarily, generations of Russian painters. Keeping in mind that the oppression of artistic freedom in the Soviet Union generated an entire arts-movement. The Soviet Nonconformist Art with formidable representatives such as Serov, or avant-garde expressionist Anatoly Zverev. 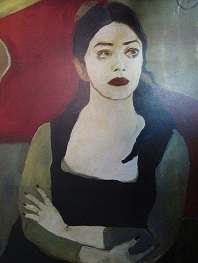 And to create a haven for these nonconformist artists, who often fled the Soviet Union or found collectors outside their home country, in the U.S., the Museum of Russian Art in Jersey City opened its doors on September 15, 1980 and has been a place of art, politics and intellectual exchange for thirty one years.

The young, Russian artist Gasoyan borrows. The ability to express human emotions with basic brush strokes from symbolist painter Paul Gauguin, the sometimes frantic approach of Vincent van Gogh, Edvard Munch's undeniable predilection for themes such as love, fear, death and anxiety, Wassily Kandinsky's precision and strong intuition for colors. What turns these elements combined into "a Gasoyan" is the artist's sense for space, surprising perspectives, his unconventional use of color, and the brave ease with which he introduces loneliness to his artwork.

The current exhibition at the Museum of Russian art is so inspirational, because director Margo Grant understands to bring together two different, but complementary schools of thought.

Udita Leberg-Shapiro was born in the western Ukraine city of Uzghorod in 1955 and went through early furtherance of her obvious artistic talent by her parents, and the Soviet government. The Soviet Ministry of Foreign Cultural Affairs in Moscow featured her prowess in 1965 with a solo exhibition and named her a child prodigy during a press conference. She went to art schools in Moscow, Budapest, New York and Jerusalem, immigrated to the USA in 1974, lives now in Fairlawn, New Jersey and is a devoted art and music teacher.

Leberg's pieces are of profound elegance, a deep, very timeless connection to the "old world" and an extraordinary skill to express life and liveliness in somber colors. Talking to her at the opening, she seems almost apologetic about the fact that she would have loved to use more and brighter colors, earlier in her artistic career, but the political circumstances in her home country taught her to stay within artistic boundaries. "I would have loved to paint like Joan Miró, the way he uses colors, but we had very strict teachers." Leberg portrays the story of an outstandingly gifted young woman that learned early to follow the rules, set by an oppressive regime, and still, "I did my own paintings on the side, but I couldn't show them at school," she smiles astutely.

The exhibition is open every day from 2 p.m. - 6 p.m. until September 25.
For more information: www.moramuseum.org