You don't typically think of pinball -- the pastime of famous 1970s characters like the Fonz and The Who's Tommy -- as a particularly cutting edge technology.

Yet that's just what Jack Guarnieri is setting out to do with his recently launched company, Jersey Jack Pinball. Guarnieri founded the company in 2011, after 35 years in the pinball industry as a mechanic. His machines offer a significant upgrade on what you'd expect from the beloved arcade machines, offering cinema quality animations and LED lights that can change into any color -- an industry first.

Guarnieri says he wants to use new technology to make "the greatest pinball machine ever.”

Now Guarnieri and Jersey Jack Pinball are celebrating the successful release of its Wizard of Oz pinball game, selling a first run of around 1,500 units for $7,000 each, according to CNNMoney.

Jersey Jack Pinball's timing appears to be spot on as the game seems to be undergoing a "resurgence," as Guarnieri puts it. Competitor Stern Pinball -- the only other company still surviving in the business -- has seen sales triple since 2009, while the International Flipper Pinball Association saw membership grow 30 percent last year, according to CNNMoney.

As the company prepares to release its second game in 2014, this time based on The Hobbit, it remains to be seen whether or not Jersey Jack Pinball will foster a full-fledged renaissance for the game that was once so loved.

One thing’s for sure though, it’s a whole lot of fun -- and not just for the customer.

“The best part of this job is being involved with something that I love, so it’s not work,” he said. 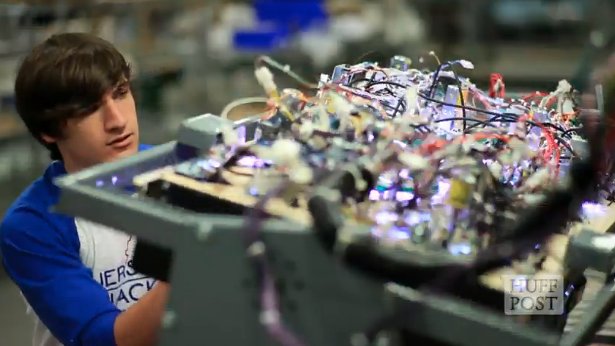 1 / 6
A Jersey Jack Pinball employee working on a new machine.