When Superstorm Sandy slammed into the East Coast one year ago, its size and ferocity shocked the nation. It was the largest Atlantic hurricane ever recorded. It touched 24 U.S. states and was the second-costliest storm in U.S. history, second only to Hurricane Katrina. And in New Jersey, which took a direct hit, Sandy damaged or destroyed more than 350,000 homes.

Sandy caused terrible damage to lives and property but the storm managed to do something else, too: It reignited the silly debate over whether we should be building (or rebuilding) near the ocean.

I call it a silly debate because there is no debate -- New Jersey is and should be rebuilding along its coastline.

For the past six months my colleagues from This Old House and I have traveled back and forth to the Jersey Shore to follow the rebuilding of three coastal homes damaged or destroyed by Sandy. And during those six months I heard every one of the arguments against our efforts.

Building near the ocean is irresponsible. Don't subsidize wealthy beachfront homeowners. The storms will return and the homes will get destroyed again. Mother Nature is unstoppable.

I listened, but I didn't find any of the arguments compelling.

Let's start with Mother Nature and the notion that she can't be contained. I'm sorry -- but she can be.

Each year in this country we move trillions of gallons of water from rivers, reservoirs and aquifers to supply arid lands, irrigate farms and even water our lawns. We manipulate rivers, converting flood plains into farmland and neighborhoods. We push snow, capture wind, collect sunlight, and fight fires. And with human ingenuity and determination we will continue to press Mother Nature into service to meet our needs.

Does that mean messing with Mother Nature comes without risk, consequence, or expense? Of course not. The critics are right: The storms will return and the coast will be hit again.

But we have the technology to build better and stronger homes that can withstand the next storm. Homes in New Jersey will go up higher, foundations will be replaced by piles and breakaway walls, and building codes will change to account for new flood maps and new realities. 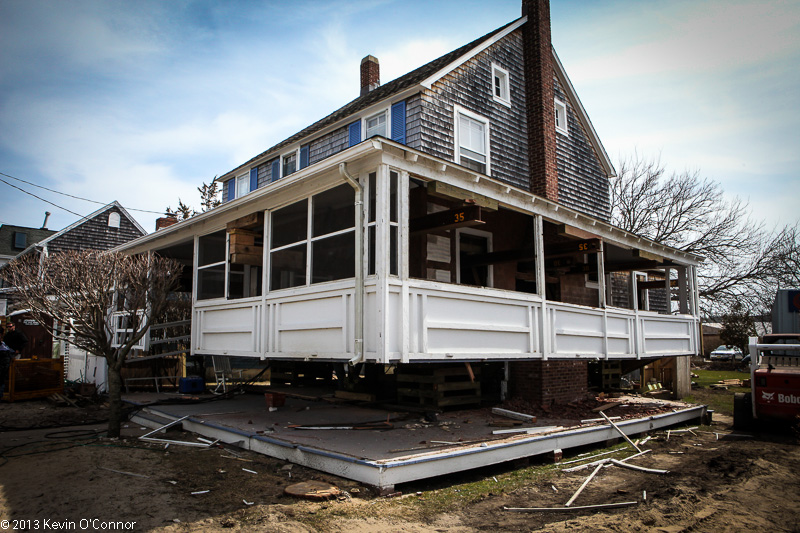 This Old House raises a storm-damaged home in Bay Head, NJ to protect it from future floods.

There are countless places in this country that are inhospitable to development. But New Jersey can't abandon its coastline any more than Nevada can abandon the desert or New York can abandon low-lying neighborhoods in Manhattan. Nearly 20 percent of all New Jersey residents live in the state's four coastal counties that were hit hardest by Sandy. That's more than 1.5 million people -- more than each of the populations of Vermont, New Hampshire, and nine other U.S. states.

I've spent the last 10 years with the This Old House crew rebuilding creaky old homes, and the last six months on the Jersey Shore getting to know families devastated by Sandy who were desperate to get their own home rebuilding projects underway. There is one thing I now know for sure: Rebuilding along the Jersey Shore may be expensive. It may be controversial. But it is not optional.

The new season of This Old House, "Jersey Shore Rebuilds," is airing now on PBS and at ThisOldHouse.com. For comments Kevin can be reached on Twitter @KevinOConnorTOH.