These are Jerusalem artichokes. They're also called a sunchokes. 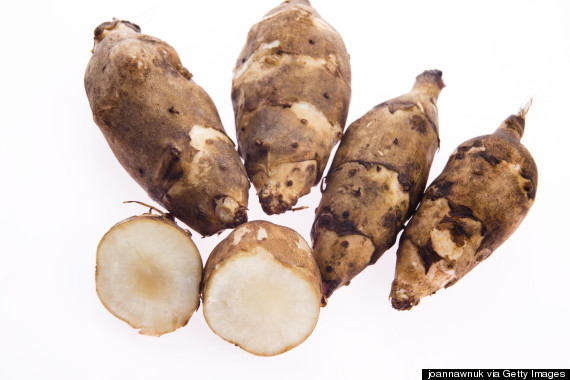 No, sunchokes are not the most beautiful vegetable on the block. You've probably dismissed them in the produce aisle, brushing the tubers off as wonky, distant cousins of the potato. But don't let yourself be confused by their appearance or their name; when cooked correctly, they taste like a thing of beauty, and they've got nothing to do with artichokes.

Remember the story of the ugly ducking? The fowl, who with a bit of time and care, transformed into a beautiful swan. When Jerusalem artichokes are cooked, they still are pretty strange looking, but they offer a nutty-sweet crunch that brings ordinary dishes to stunning heights. This mighty choke is similar to the potato in the sense that it offers a hearty starchiness and can be prepared in so many ways. You can fry, bake, puree and mash this rowdy root. But its nutritional profile is far more impressive than the potato's: The Jerusalem artichoke is high in fiber, antioxidants and potassium.

Now be mesmerized by these gorgeous recipes below, each of which cast the Jerusalem artichoke as its protagonist. Then run -- don't walk -- to your nearest grocer and snatch up as many of these ugly vegetables as you can, before the secret's out.