Watching movies for ten days at the 31st Jerusalem Film Festival might seem like an escape from the current reality of rockets fired from Gaza into Israel as well as the subsequent military retaliation of the Israeli government. But many of the Festival selections confront ethnic tension and inspire a deeper reflection than headlines can ignite.

At the Closing Night ceremony Thursday, Festival Founder and President Lia Van Leer thanked "those who came in our days of sorrow to help us make a great festival." This indomitable woman, 93 years young, set a tone for the rest of the evening that was both sober and hopeful. It included the awarding of the Festival's Achievement Award to actor Makram Khoury, a Palestinian who has incarnated both Jewish Holocaust survivors and Arabs onscreen.

Although he could not be present for medical reasons, actress Yael Abecassis read his letter aloud: "Cinema is not accepting reality as it is," he wrote. "We are creators of the impossible. ... and it is possible to live a good life here."

The film Dancing Arabs was to have screened at the 6,000-seat outdoor Sultan's Pool, but security considerations led the ebullient Festival director Noa Regev to move the event into the Cinematheque. Director Eran Riklis introduced his film by acknowledging that there has been "too much blood," adding, "the most important thing is to stop hating." He called Dancing Arabs "a modest contribution" to the dialogue.

Adapted by Sayed Kashua from his semi-autobiographical novel, this engrossing tale of identity centers on Eyad (Tawfeek Barhum), a bright, sensitive Arab youth trying to make a life for himself in Jerusalem. The combination of a Jewish director and an Arab writer results in a sensitive coming-of-age drama. A co-production of Israel, Germany and France, it begins in 1982: Eyad's home life is warm, but marred by the fact that his father (Ali Suliman, whose films include Lone Survivor, The Attack and Paradise Now) was arrested in his youth for suspected terrorist activity. 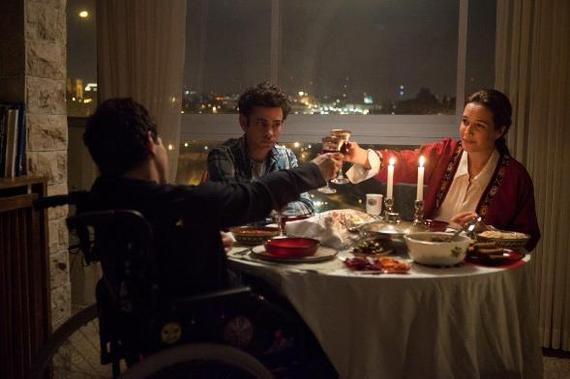 By 1988, Eyad has been accepted at an elite boarding school: the only Arab student, he is misnamed "Ayid" (ironic in that the Yiddish pronunciation means "a Jew"). The humanist anchor of Dancing Arabs is Edna (Yael Abecassis), a Jewish lawyer who befriends Eyad after he volunteers to help with her disabled son Jonathan (Michael Monoshov). She even allows Eyad to use her son's passport to get a job as a waiter.

Perhaps the film's vision is crystallized in a rock concert: a male singer's lyrics are about redeeming Palestine after 20 years of Occupation, but he is then joined onstage by a female performer with a more peaceful reminder: she sings that Ishmael and Abraham were brothers.

Shifting identity is also the theme of Shira Geffen's Self Made, an Israeli black comedy that invokes David Lynch and Luis Bunuel. Michal (Sarah Adler), a famous Jewish conceptual artist, wakes up disoriented. After she calls an IKEA-like furniture company to complain about a missing screw, Nadine (Samira Saraya), an Arab factory worker, loses her job. When Nadine is stopped at a checkpoint, a female soldier (Na'ama Shoham) proves to be a third Israeli woman whose internal and external landscape are not in sync. Like Robert Altman's "3 Women," Geffen uses a disorienting logic of images and poetic overlaps, but in a politically charged context.

Samira Saraya (right) in Self Made, Photo Credit: Ziv Berkovich

Before the screening of Self Made at the Jerusalem Film Festival on Thursday, the director asked the audience to stand for a minute of silence in memory of the children killed in Gaza. While most stood up, a few audience members refused, angered that they weren't being asked to remember the Israeli who was killed delivering food to soldiers.

Lest it seem that the Jerusalem Festival was dominated by tense questions of Israeli identity, discussion of a gem like Michael Verhoeven's Let's Go! is in order. The German director of such classics as The White Rose and The Nasty Girl adapted the autobiographical novel of Laura Waco. It is a moving post-Holocaust drama about a survivor couple who try to create a life in Germany. Verhoeven cross-cuts between the late 1940s, when Hela (Katharina Nesytowa) gives birth to Laura, and 1968, when the grown Laura (Alice Dwyer) returns from California to Germany for her father's funeral. 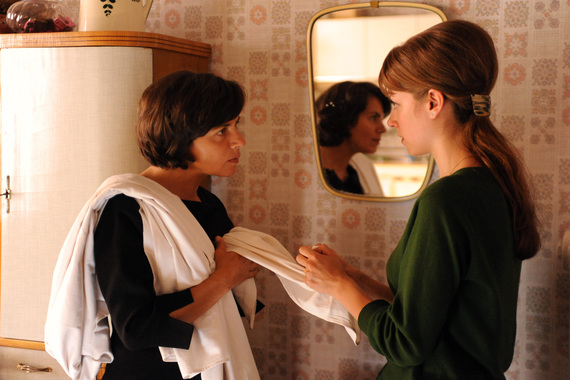 As she tries to embrace her bereaved mother (played by Naomi Krauss), Laura is rejected. Holocaust details are respectfully suggested rather than reenacted, often through a child's perspective. And the image of the Jewish protagonist -- the vulnerable victim of anti-Semitism -- is radically different from the provocative Israeli films at the Festival.

Like Dancing Arabs and Self Made, Let's Go! is part of an ongoing dialogue about Jewish identity, whether framed by the Holocaust or contemporary turmoil in the Middle East. By personalizing critical issues, these movies attempt what politics seem unable to achieve, exploring the needs, fears and aspirations that transcend national or ethnic boundaries.