Jerusalem is one of the world's most important cities, held sacred by three religious traditions, and it's now possible to virtually visit its holy places in an unprecedented way thanks to the vision and daring of the team behind "Jerusalem," a new giant screen film presented by National Geographic Entertainment.

Producers Taran Davies, George Duffield, and Daniel Ferguson faced huge challenges to gain access to sacred spaces as well as the airspace above the holy city, which is usually a no-fly zone. They stated in a press release, "Our goal is to look at the roots of the universal attachment to Jerusalem: Jewish, Christian and Muslim. We hope the juxtaposition of these different religions and cultures -- all with profound spiritual and historical connections to the city -- will reveal how much Jews, Christians and Muslims have in common and inspire all of us to better understand each other."

But how to tell the story of Jerusalem without just focusing on politics? Enter three teenage girls from each faith: Farah Ammouri, a Muslim, Nadia Tadros, from a Greek Orthodox and Catholic family, and Revital Zacharie, a Jew.

Ferguson asked each of the girls to take him (separately) on a one-day tour of Jerusalem, which he filmed. “What was really amazing was that they would bring me to some of the same places in the city and tell me entirely different things. Revital would point out Jewish history, but when I asked her if she knew about the Christian or Muslim attachment to the same places, she didn’t. The same was true of the other girls.” 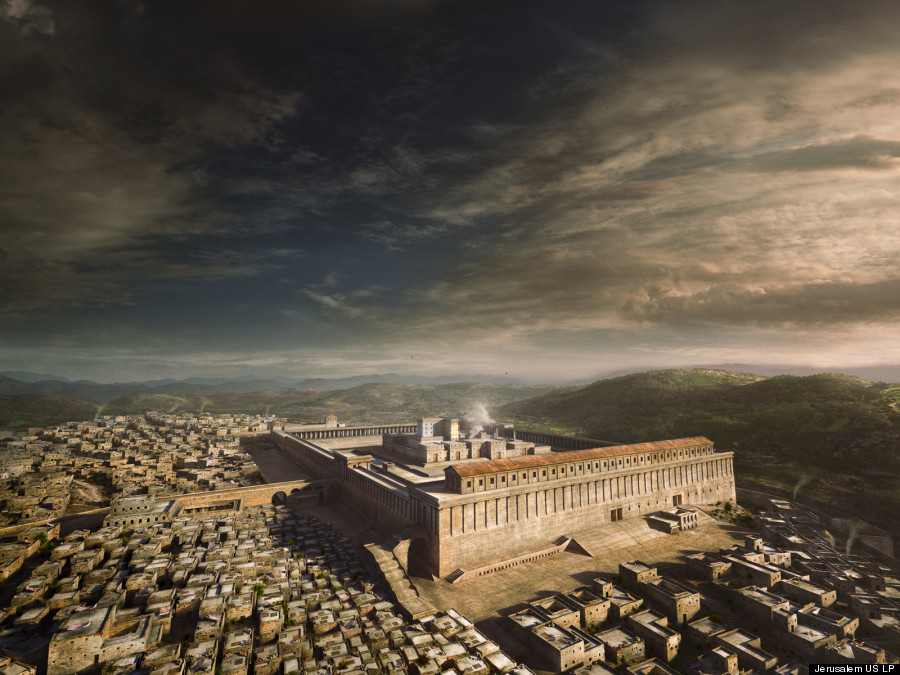 Exclusive: A computer-generated recreation of Jerusalem in the 1st century CE (AD), featuring the latest archaeological consensus on what the 2nd Temple might have looked like. 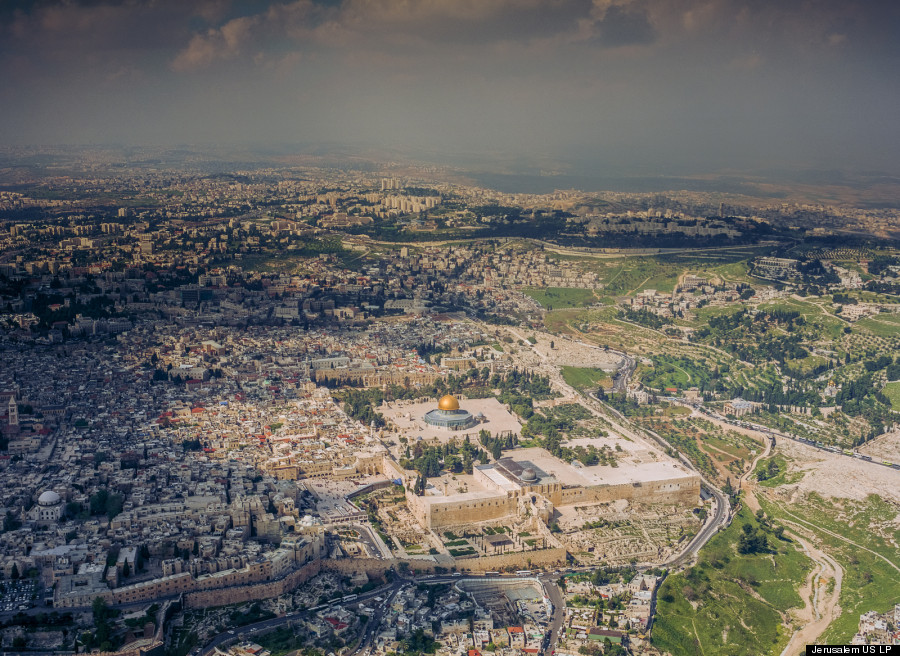 Exclusive: A rare aerial view of Jerusalem's walled Old City and the Mount of Olives, sacred ground for half our population. 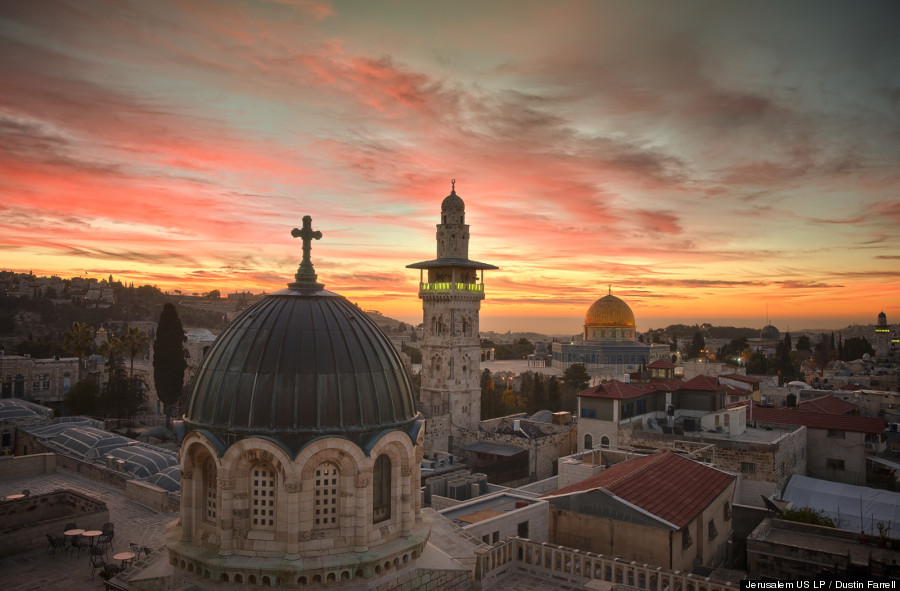 Exclusive: A pre-dawn view from the rooftop of the Sisters of Zion Convent off the Via Dolorosa 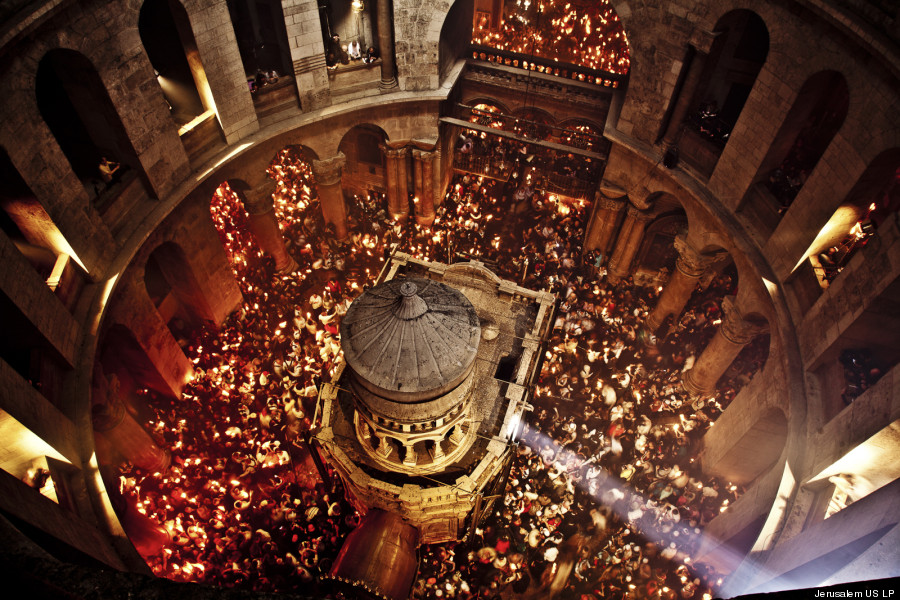 Exclusive: The Ceremony of the Holy Fire takes place every year on the Saturday before Easter in the Church of the Holy Sepulchre. Meant to symbolize the resurrection of Jesus, it is considered by many Orthodox Christians to be the longest-attested annual miracle in the Christian world. 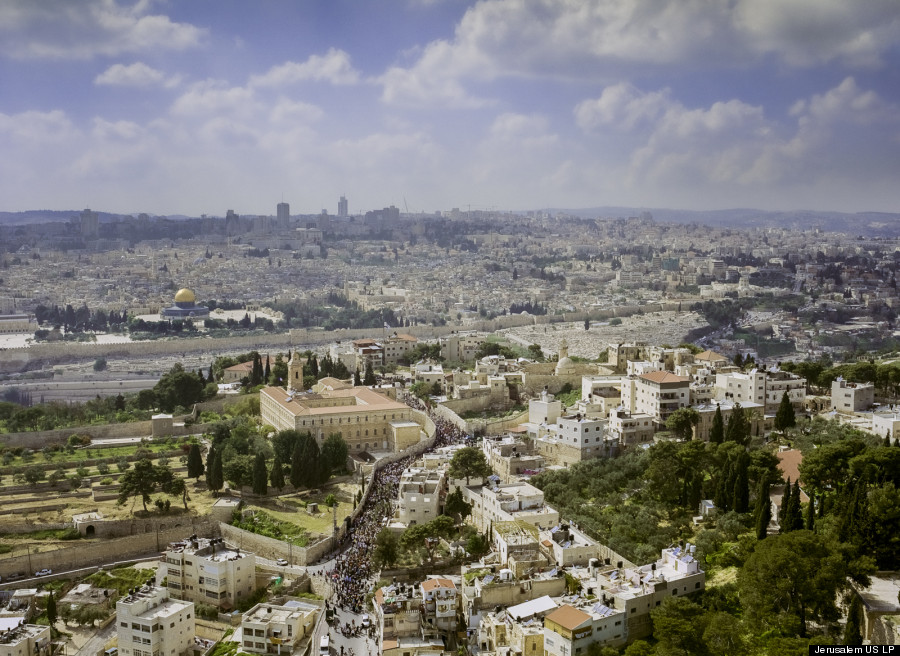 Exclusive: An aerial view of the Palm Sunday procession on the Mount of Olives, an annual event celebrated by Christian pilgrims to commemorate Jesus' entry into Jerusalem a week before his death. 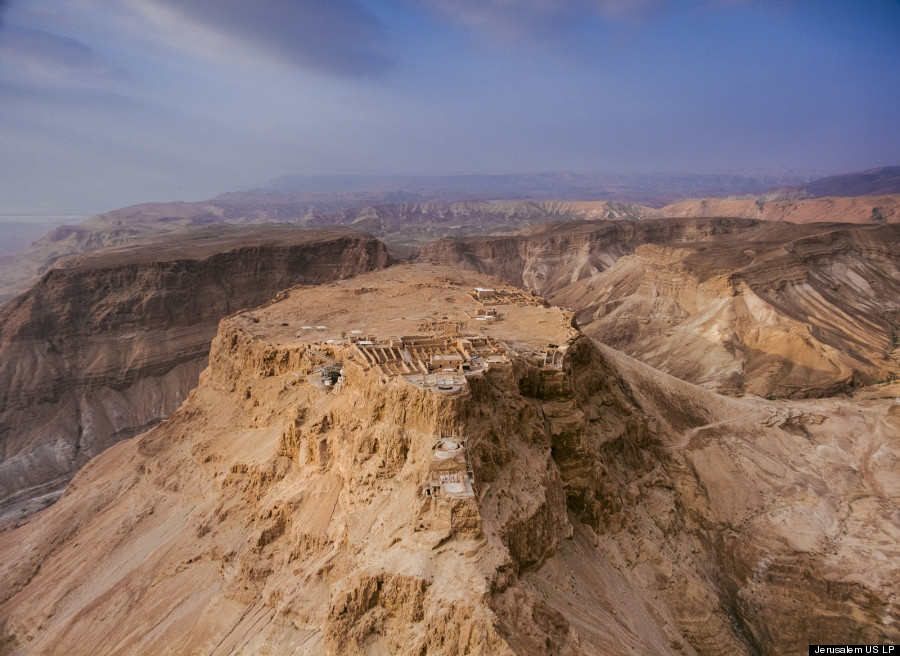 A breathtaking aerial view of Masada, once a mountain fortress built by order of Herod the Great during the 1st Century BCE (BC). 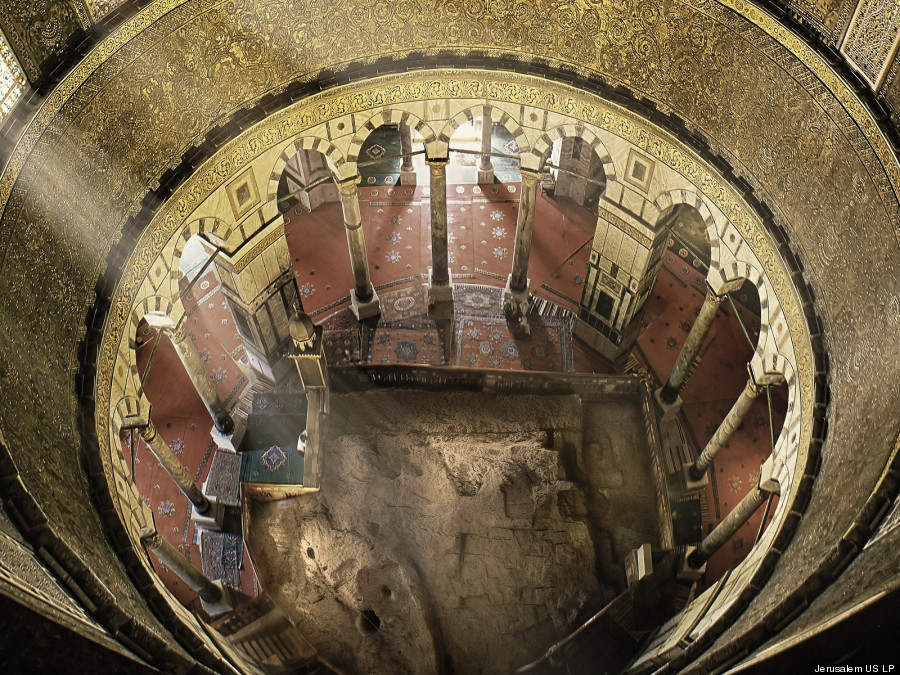 A rare view of the rock at the center of the Dome of the Rock. Muslims refer to it as "as-Sakrah", the rock from where they believe the Prophet Muhammad ascended to heaven. In Jewish tradition, it known as "the Foundation Stone," where Abraham prepared to sacrifice his son and where the Temples stood. Many historians believe the biblical Jebusites worshiped here nearly 5000 years ago. 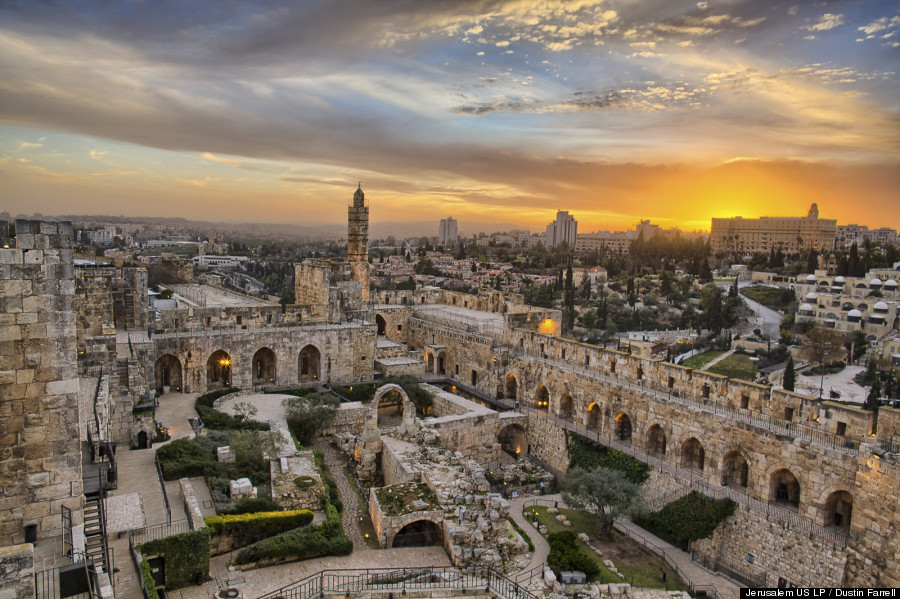 Jerusalem's iconic Citadel (now the Tower of David Museum of the History of Jerusalem) is a fortress with archaeological findings spanning over 2,000 years. 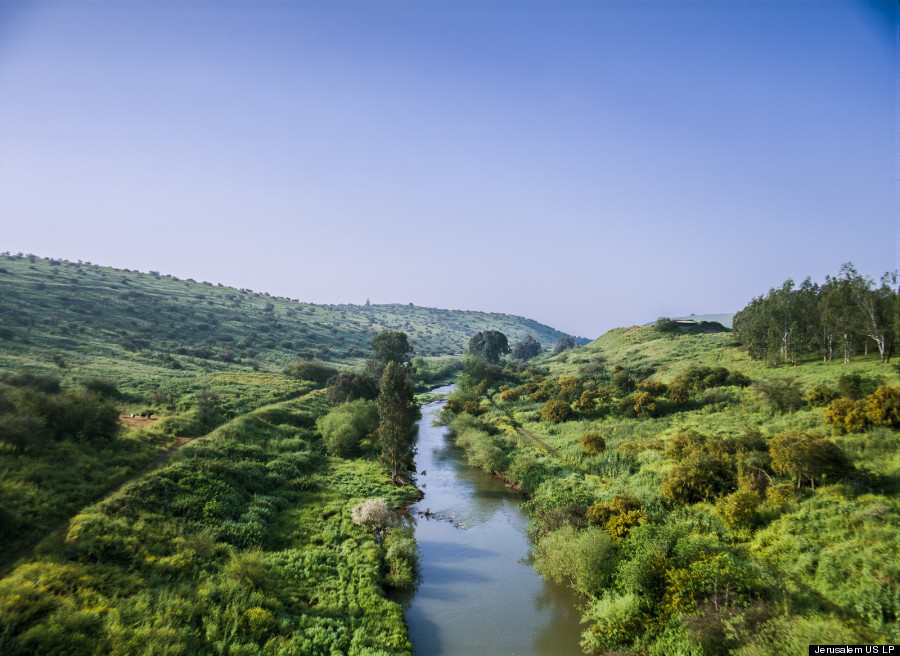 An aerial view of the Jordan River, which lies about 30km (20mi) East of Jerusalem and flows from north of the Sea of Galilee to the Dead Sea. 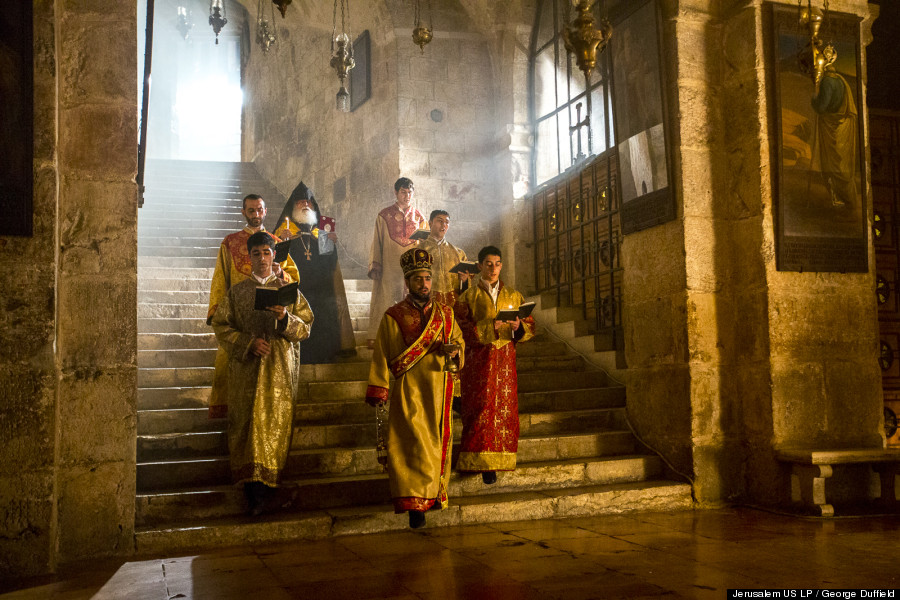 A group of Armenian Apostolic priests descends the stairs to the Chapel of St Helena in the Church of the Holy Sepulchre. Tradition holds that Helena, mother to the Emperor Constantine, discovered remnants of the True Cross here in the 4th century C.E. (AD) during the construction of the original church. 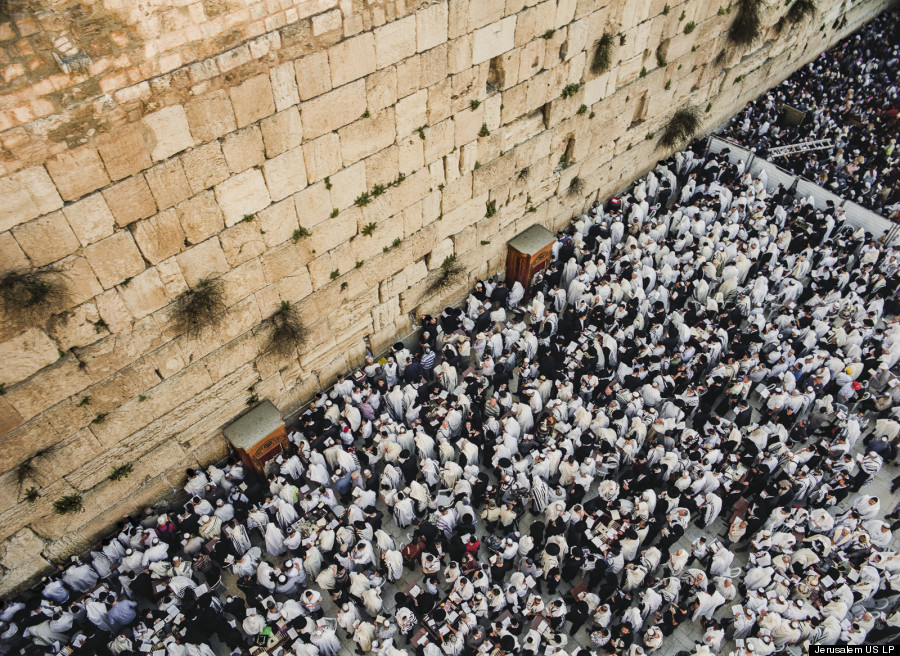 Tens of thousands of Jewish pilgrims congregate at the Western Wall during Passover for the Birkat Kohanim, meaning "Priestly Blessing". 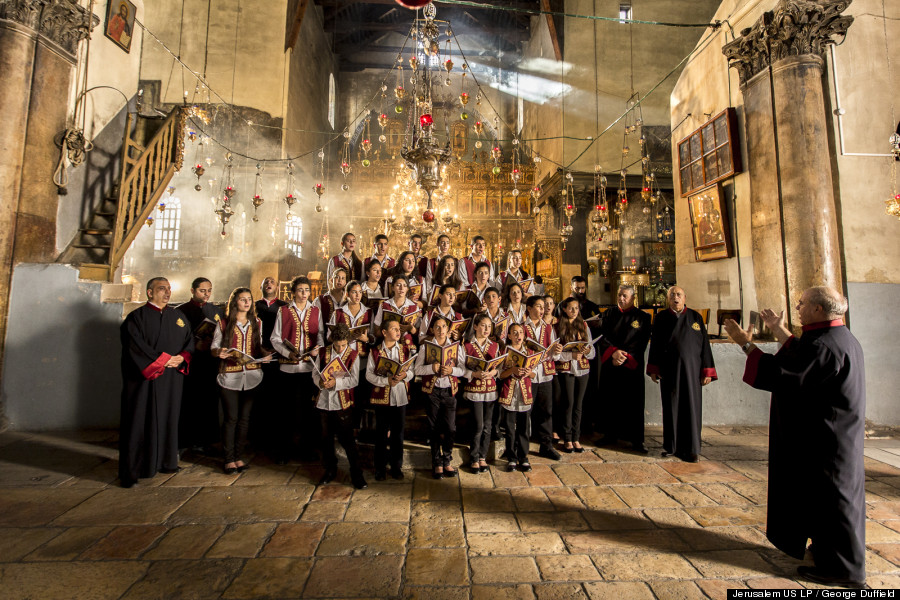 A Greek Orthodox youth choir from the town of Beit Sahour sings in Bethlehem's Church of the Nativity, built on the traditional site where Jesus was born. 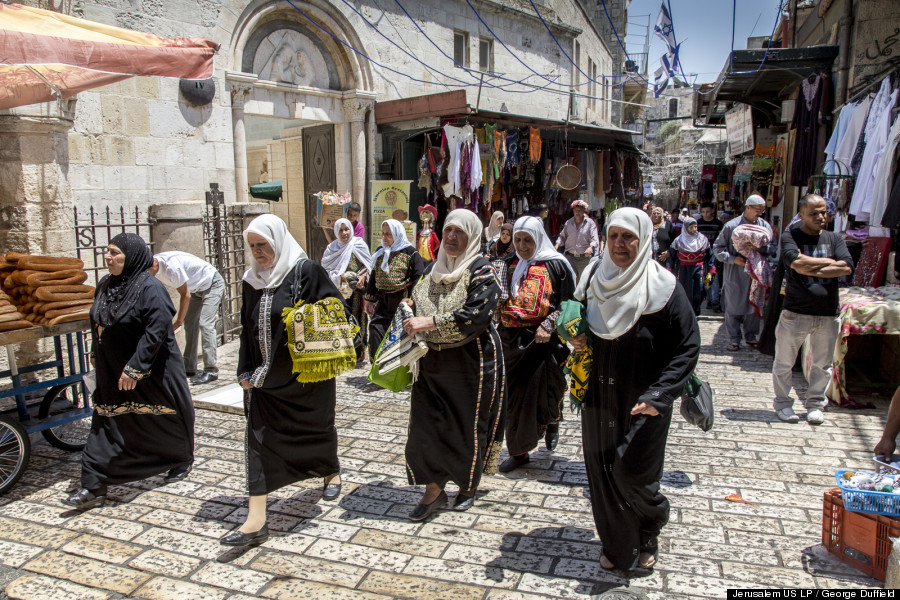 Muslim women from nearby villages on their way to noon prayer at Al-Aqsa Mosque during the Islamic holy month of Ramadan. 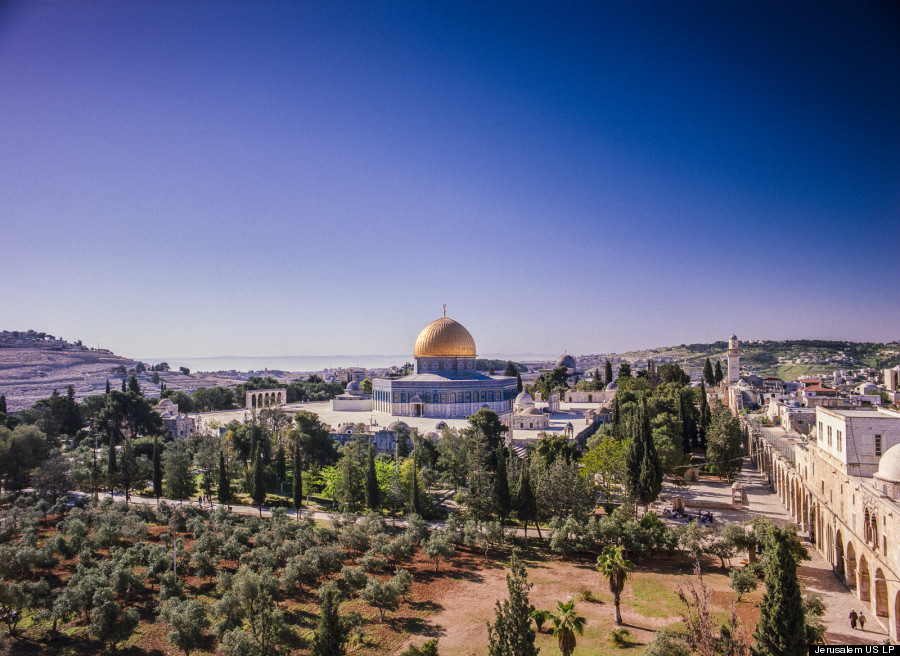 Al-Masjid al-Aqsa, meaning "The Furthest Mosque" is one of the three most important sites in Sunni Islam. At its centre is the Dome of the Rock. The entire area takes up one sixth of the walled city of Jerusalem.