With his first solo Los Angeles show, "Mark of Cain," artist Jesse Hazelip confronts injustice with a powerful weapon, his art. Hazelip addresses issues surrounding the United States' increasingly privatized prison system with beautiful, profound, deeply symbolic art that combines delicate pencil and pen drawings with elements of graffiti and tattooing. Born in Cortez, Colorado where he lived amidst the Ute and Navajo Nation, Jesse moved to Santa Barbara when he was 13 and got involved in the graffiti scene, developing his art skills, then graduating from Art Center College of Design in Pasadena, CA with a BFA. Transitioning into galleries, he continues to use wheat paste and paint public space, running his own "ad campaigns" with graffiti and posters to reach as many free minds as possible. 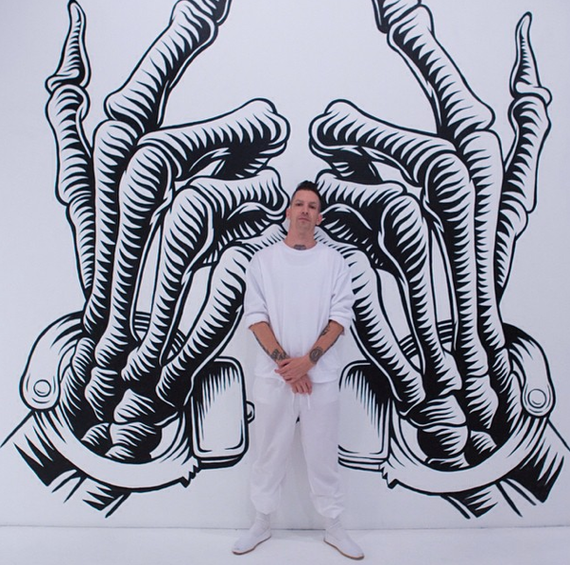 In "Mark of Cain," Hazelip uses wheat paste, scrimshaw, and mixed-media paintings on wood salvaged from an abandoned prison, mixing in graffiti and tattoo styles with exquisite fine art techniques loaded with symbols. In an email interview he detailed his use of symbolic animals:

"I chose the bull as representation of the prisoner because of the use of the animal as labor (pulling plow) and as a commodity (meat). I draw the butcher sections upon the bulls as if they are ready to be slaughtered and divided. Each bull has markings, such as tattoos or branding, much like prisoners tend to earn while incarcerated. The wolf references the prisoners' natural inclination to form packs, or gangs, in order for self-preservation. The most notorious gangs in North America were formed in prison, and the violence always ends up seeping into the community outside. The vulture represents the system itself. Adorned with a hunting hood, the vulture blindly preys upon the weak (young) and less fortunate (poor) and the few (minorities). I use the snake to describe the cycle of violence within the Prison Industrial complex. The ouroboros is the eternal return, and I use it to describe the current state of our prison system."

For his Known Gallery show, which closes this Saturday, November 15, Hazelip created a mural with skeletal hands cuffed together. Variations of this image, shown using hand signs, are repeated throughout the show. And for his opening night, the artist designed a site specific performance in a 6'x9' box built from fluorescent lights, replicating a solitary confinement cell. During his performance, Hazelip was tattooed on his face by Huero of Heuro Tattoos. He explains:

"A facial tattoo is one of the strongest statements a person can get--it sets you further outside of society than anything else--except a felony conviction. The tattoo was done as visible protest again prison conditions and human rights violations in U.S. jails and prisons.
I came across the reference to the mark of Cain in the book The New Jim Crow. It drew a comparison from the mark of Cain to being labeled a felon or a criminal. I chose to have a version of the mark tattooed on my face during my exhibition to protest the treatment of individuals struggling with our system that is designed for them to fail. It was my hope that this act would bring attention to the plight of the criminal that has already paid the debt to society, but still faces rigorous obstacles to function once released into society. For the exhibition I built a structure the size of the average solitary confinement cell as a stage for the tattooing. I chose to tattoo my face because of the sacredness associated with one's own face, and the permanence of the medium was a way of sacrificing my own ability to fit into the status quo, much like less visible obstacles that prisoners face after being marked by a felony or the criminal label." 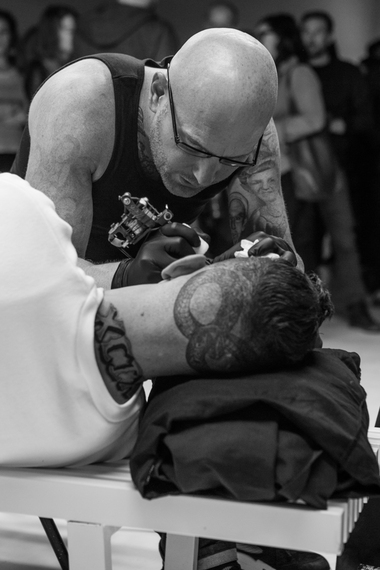 "I've had countless encounters with police due to my lifestyle choices, but I couldn't believe the treatment I was subjected to, especially on a nonviolent offense. The treatment of everyone throughout the processing procedures was extremely dehumanizing. I observed many human rights violations and upon entering the main jail was told that I 'could disappear' if I caused any problems. Though I was only held for about 5 days, I was able to ascertain that there were deeply troubling issues within the system. Racial bias was apparent, though that seems to be common knowledge, which is puzzling in an allegedly free and equal society."

As part of the opening night's events, Hazelip had the San Diego-based Cholo Goth band Prayers play. Prayers' Rafael Reyes is a two-strike offender, and his music deals with the harsh urban realities than can lead to incarceration. While Reyes credits his time in jail with changing his life for the better, not many felons have his options and opportunities. 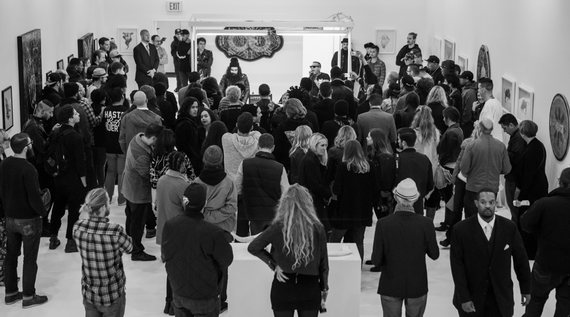 "Prison has become a way of warehousing (primarily) young men of color, and then to further marginalize them upon release --it's very hard to get a job with a record. What solutions do you see--short- and long-term? There are plenty of programs that benefit prisoners inside and out of prison. Unfortunately the funding for such programs are limited and get cut out of budgets often. If we were to focus more on rehabilitation and prevention then we would see much less recidivism. Education is such an easy solution, yet we continually neglect our education system and fund more shortsighted endeavors, such as war and weapons manufacturing. Prioritizing education and activities for children is the obvious foundation for keeping young minds occupied and off the streets. Our judicial system focuses mainly on the punitive approach to incarceration and shuns rehabilitation. It is evident that it is not successful because of the scale of our prison system. Also the motives must be analyzed as well, because the private prison industry is thriving regardless of the crime rate statistics. States are signing contracts with private prison entities that have it written in that the facility must be kept at 90-100% capacity. I find it appalling that any prison would want to keep their beds full, especially if there is a fiscal motivating factor."

"The American slogan of innocent until proven guilty is an outright lie. If that were true then arrests wouldn't go on your permanent record, only convictions would." 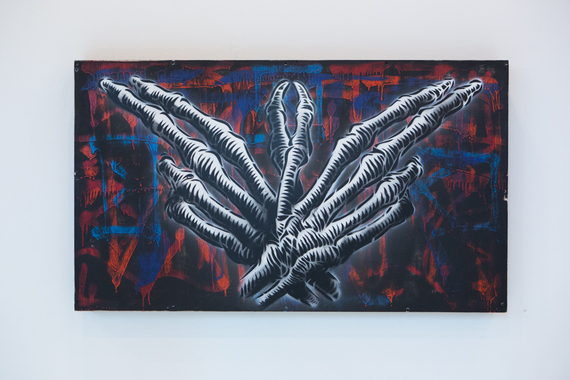