On Tuesday night, during Ron Paul's address to his supporters, the Texas congressman invited "Jesse Thorsen on stage to say a few words." CNN viewers met Thorsen earlier in the evening -- the tattooed soldier was interviewed by Dana Bash at a caucus site, at which time he expressed his support for Paul and the possibility of a "peacetime Army." (Thorsen, a corporal, told Bash that he had served for 10 years, all during wartime.)

The interview was interrupted by unspecified technical issues. In this clip, uploaded to YouTube earlier Tuesday night, the uploader speculates conspiratorially that the "technical issues" had everything to do with the fact that Thorsen was appearing in public, in uniform, expressing his support for Paul, in violation of military protocol. That might have been easy to dismiss -- until Thorsen appeared at the podium alongside Paul. 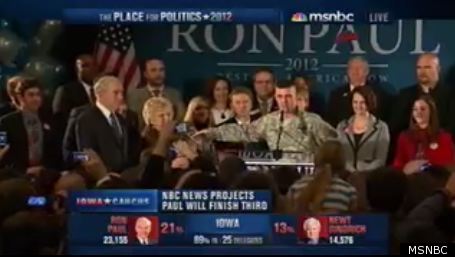 Military protocol is clear on the subject of how soldiers can participate in political activity. Matthew Tully at the Army Times addressed this matter back in 2008, and summarizes the military protocol thusly: "Active-duty members may register, vote and express their opinions on political candidates and issues -- but not as a representative of the armed forces. In other words, you cannot appear at any kind of political forum in uniform and speak on behalf of a particular candidate."

This is all spelled out in in detail in Defense Department Directive 1344.10:

4.1.1.9. Attend partisan and nonpartisan political fundraising activities, meetings, rallies, debates, conventions, or activities as a spectator when not in uniform and when no inference or appearance of official sponsorship, approval, or endorsement can reasonably be drawn.

4.1.2. A member of the Armed Forces on active duty shall not:

4.1.2.1. Participate in partisan political fundraising activities (except as permitted in subparagraph 4.1.1.7.), rallies, conventions (including making speeches in the course thereof), management of campaigns, or debates, either on one's own behalf or on that of another, without respect to uniform or inference or appearance of official sponsorship, approval, or endorsement. Participation includes more than mere attendance as a spectator.

4.1.2.6. Participate in any radio, television, or other program or group discussion as an advocate for or against a partisan political party, candidate, or cause.