Jessica Alba may not be the dame to kill for in Frank Miller and Robert Rodriguez’s Sin City sequel, but she’s certainly a dame looking to kill.

The actress flips the switch in “Sin City: A Dame To Kill For” as Nancy Callahan, the lasso-swinging stripper who goes from damsel in distress to vengeance-seeking badass.

"Maybe I’ll go crazy. Crazy’s sounding pretty good right now," are the only words a grief-stricken Nancy says before taking a pair of scissors to her hair and face.

It’s been nine years since the release of the innovative neo-noir crime thriller “Sin City,” adapted from Miller’s graphic novel series of the same name, but that time lapse hasn't slowed the cast down.

Alba, 33, says she felt even more excited to “go to a dark place” with the new, scar-ridden Nancy. During a phone conversation with The Huffington Post on Tuesday, the star spoke about how she prepared to return to a role that marked a turning point in her film career nine years ago, and how she believes actresses can change the perception of women’s roles in movies.

OK, so it’s been almost a decade since the first "Sin City," and Nancy is in a very different place -- to say the least. She’s gone from a sheep in a pack of wolves to a wolf herself. In some ways, you returned to the franchise to play a completely different character. How did you prepare for that change?

Well, I worked with my acting coach first, and then, once I found all of these emotional beasts that made sense to me and what I thought was right for the character, I worked with a choreographer. [In] all the dances you see leading up to Nancy’s “Last Dance,” I wanted you to see where she was at emotionally, so it sort of made sense when she has her breakdown.

Then, I knew I would be shooting a gun, so I went to the firing range and shot [John] Hartigan’s gun, which is a really big revolver, and then I spent time with a crossbow on set just getting familiar and comfortable with shooting a crossbow. So I did a bit of preparation before I went to Austin [to shoot the film].

Wow, that sounds intense and lethal. Off screen, though, time hasn't stopped. You’re very different from who you were when the first "Sin City" came out in 2005. You’re a mother of two now and have The Honest Company. How did those things affect how you tackled Nancy this time around? Was it easier?

I don’t know if it was necessarily easier, but it was definitely exciting. I was much more, I don’t know, just excited to take on a role like this and to challenge myself as an actress and really go to a dark place and really go full-out. I’m not a dancer, so a big part of it was just getting comfortable in my own skin and my own body. So those moments, even though they’re tiny little moments, I really thought they were important for the character. They tell you a lot about who she is in the dancing. 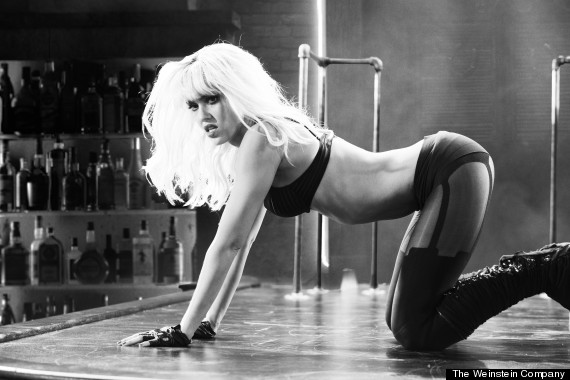 I think being a mom and having a company and being a successful business owner and going through ups and downs in the business -- I went away from it for a little while -- [gave me] a different perspective. When I came back into it ... I was really excited to take on this role and to challenge myself.

Speaking of being a successful woman, I read in your interview with The Chicago Sun-Times that you consider this "Sin City" sequel “a powerful movie for women.” It’s obvious women play a huge role in this film just based on the title, but can you elaborate on the things you feel make it most powerful for female moviegoers?

A lot of the different stories revolve around the women, the women that are supporting the men, and it’s the men that are kind of going crazy and losing their mind [laughs]. Nancy loses it for a second, but then she finds her strength. We get to see her personal evolution on how she becomes who she is. By the end of it she becomes a warrior, so it makes sense. Yeah, not all the women are good, but they’re all powerful, that’s for sure. 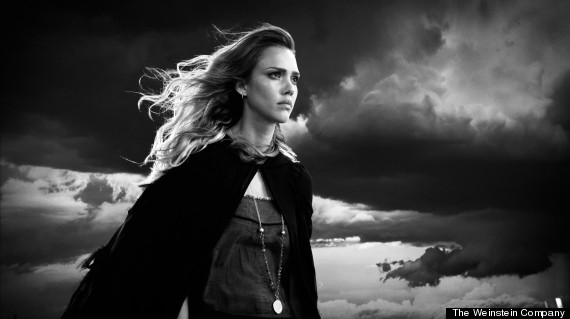 I think those were just scripts that I got. I don’t know if that’s what everybody got [laughs], and I think that was when I was like 20 years old.

I feel like they’ve gotten better because there’s more women that are showing they can open movies and have box office appeal, like Reese Witherspoon, Jennifer Lawrence, Angelina Jolie and Charlize Theron. So I think there’s more opportunities maybe than there were before for female leads in film versus just being “the girl,” and I think it’s a matter of us women choosing to take on those roles.

You know, maybe you get paid more money to play the “hot girl” that really doesn’t have anything to do, but it’s not going to be a role that’s going to make a difference in the perception of women’s roles in movies. So maybe do that gritty independent [film] that you may have to produce and put together, but you get to play a lead and you get to play a dominant, complicated, multi-dimensional character.

That’s what’s great about working with Robert and Frank on this. They really didn’t write the women to be these precious or simple people -- they’re complicated and they’re sad and they’re angry, and some are evil and some are good and some are loyal [and] some are heartbroken. We all got to play these complex characters, so that was really nice. And I think it’s just hopefully working with more filmmakers that see women like that.

And you might have the opportunity to do it a third time. Frank Miller and Robert Rodriguez are reportedly already thinking about "Sin City 3." Would you return to the franchise, even if it takes nine more years for the third one to come out?

Oh God. [laughs] I hope it doesn’t take that long.

Well, by then you'd have spent a fair share of your career in "Sin City," a town filled with evil and vices. What would you say is your biggest vice or guilty pleasure?

"Sin City: A Dame To Kill For" opens August 22 nationwide.

Sin City: A Dame To Kill For