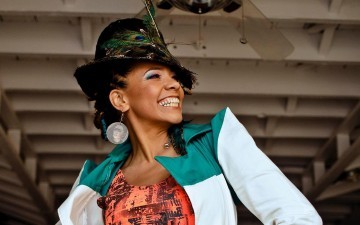 Detroit is famous for its music, from Motown to techno and house, to Eminem and Dilla. But it's less well known for its stellar, homegrown poets.

A native daughter of the D, jessica Care moore first won hearts with her five-time winning streak on It's Showtime at the Apollo back in 1995, after newly transplanting herself to New York City at age 22 a year after her father's death.

A fiery performer of blunt-force truth emerged onstage that night. From a petite young woman in a demure dress and box braids exploded a voice that was unapologetically centered in her own visceral experiences as a hip-hop generation-identified sista poet. She knocked that famously tough Apollo audience out cold with the searing conviction of her Black-woman-uplifting poem, "Black Statue of Liberty."

Moore's poetry has always been equal parts personal and political, and her multitasking abilities are formidable: she's also an independent book publisher who issued the literary debuts of fellow poets--including Saul Williams and Newark, New Jersey mayor Ras Baraka--on her won Moore Black Press. All that, and she's the doting, proud mom of two sons.

Rapper Talib Kweli, Moore's longtime pal, thought the poet his ideal choice to sign to his Javotti Media label when "one day, she was in my crib kicking it and played me the album she fully intended to release on her own, and the album blew me away. It was excellent. I had to be involved."

Originally, the two met in 1995 when, according to Kweli, Moore "walked into Nkiru Books where I was working at the time and asked [me] to carry her books. We ended up on many [show] bills together over the next few years, and she became not only one of my biggest artistic inspirations, but also one of my greatest friends."

Nkiru Books was a tiny bookstore in Prospect Heights, Brooklyn (and the oldest African-American bookstore in the borough). Kweli not only worked there, but also eventually co-owned it with his Black Star partner, Yasiin Bey (p.k.a. Mos Def).

The store was both a haven and incubator (like the Brooklyn Moon Café and the Nuyorican Poets Café in the Lower East Side) for New York City's literary talents-of-color to cut their teeth sharing poetry, and to feel connected to a larger community.

Eventually moore returned to Detroit to raise her birth son (King, 9) closer to family roots, where she regrouped after a second divorce. In 2004, she conceived Black Women Rock in Atlanta, the grown women-spotlighting event she organizes annually at the Charles M. Wright Museum in downtown Detroit.

"I have not heard many great spoken word albums, so I can say that as much as I love seeing jessica perform, I really wasn't checking for a recorded piece," says Kweli. "Jessica has made her name as a poet, but this album is so much more than just spoken word. It's jazz, it's R&B, it's hip-hop, it's literature--it's fucking badass."

In this interview with EBONY.com, moore talks about her badass new album and the hills and valleys of a "grown woman rock star" poet's journey.

EBONY: Your album is rich in themes that introduce a fierce stage alter-ego and features musical and poetry heavies like Roy Ayers, Jose James, imani uzuri, Ursula Rucker, your label business partner Talib Kweli, and several up-and-coming artists. How did Black Tea: The Legend of Jessi James come to life?

jessica Care moore: In December of 2011, I was in L.A. with my son for our annual escape the snow trip. Two of my January gigs were canceled on me out the blue from some indie promoters I shouldn't have trusted. I'm a single mom and working artist and the winters can be slow, so that was not a small loss for me.

Before leaving L.A., I'd been invited by Jose James to see his concert in Santa Monica. He knew my work from the NYC art scene days and we immediately planned to work together. Jose's approach to jazz [and] vocal styling was very inspirational to me. Jazz was never the focus. My poems and my personality were always so wild and full of fire, so rock 'n' roll, techno, house, drum 'n' bass. I have always been so fast-paced. On this album, I slowed down. It took me 20 years to do that! [laughs] I came home from L.A. not knowing how I would pay my bills for January, and decided I would write this album.

EBONY: Are there any dominant musical inspirations for the record?

JCM: I thought about other women, like Etta James, Phyllis Hyman, Billie Holiday, Whitney Houston, and the lives of women artists who put their heart, all they have, into their music and never truly benefit from it in a personal, healing way. Survival is the mantra for this project.

EBONY: You are one of the definitive figures of a '90s-2000s poetry movement centered in NYC that enriched the artistry of Kweli, Mos Def, Erykah Badu, Saul Williams, Sarah Jones, and many others. How did you originally connect with this scene? Are there younger artists that, in your mind, are keeping the movement going?

JCM: I moved to NYC in 1995. What an incredible time to be a poet in NYC. I was still learning the train when I won the Apollo. I remember meeting Talib at Nkiru Books and Dante [Yasiin Bey] at Brooklyn Moon. I just came to Brooklyn on a mission to connect with the poets I'd read and heard about. I wanted to find Tony Medina, Kevin Powell, Willie Perdomo, Tracie Morris and Paul Beatty. I knew I had a connection to these writers and poets. I was on the open mic everywhere in '95: Sunday Tea Party, Nuyorican, Brooklyn Moon, wherever, as an activist, as a poet.

I fell in love in Brooklyn. I became a mommy, a wife. All of that is connected to the '90s arts scene. I decided to publish [my book] The Words Don't Fit in My Mouth, and then would put out Saul's first book, The Seventh Octave. That was the Detroit in me. Being a poet wasn't enough; I had to make it a literal job, an institution around the work. I was really serious in my twenties! [laughs]

EBONY: Are there any young poets that come to mind who are keeping that spirit of the '90s Black arts scene alive today?

JCM: What's considered young? Jasiri X comes to mind. The Peace Poets out of the Bronx and The Dream Defenders and the Black Lives Matter movement. And yes, there are great young poets and activists out here, but it's an intergenerational movement. Saving our children takes all of us. We need Sonia. We need Ntozake. We still need Gil Scott-Heron and Amiri Baraka.

EBONY: You recently hosted an event with Kweli that commemorated the first anniversary of Mike Brown's death and the Ferguson uprising. What do you see as the role of the "artivist" in the modern era of Black Lives Matter?

JCM: I've been teaching in St. Louis jails for six or seven years, and performing my work in that city my entire career. I love that community, those kids. It's our job to be there, just that simple. We must show up. I have sons. I never saw a disconnect between art and my people, or the struggle for keeping the "human" in humanity. That's our role as artists. To tell the people's stories.

I remember meeting [deceased Black Power Movement activist] Kwame Toure many years ago on a NYC college campus. I asked him during a private Q&A session, "What was the role of Black poets, artists and the current movement?" He asked me, "Are you a real poet or a bullsh*t poet?" I laughed and stood up and said I was a real poet. He said, "Do a poem." And there it was. I, with Afro and memorized poem in my body, recited "Black Statue of Liberty." And he responded, "You are doing what you are supposed to be doing."