It's about darn time.

Jessica Chastain covers Vogue's December 2013 issue, making it her first cover for the fashion bible. Photographed by Annie Leibovitz, Jessica is shown lounging on a red seat in a vibrant yellow Theory by Olivier Theyskens dress, an image, notes Fashion Gone Rogue, that's meant to evoke the painting "Flaming June" by artist Frederic Leighton. (Inside the mag, the rest of Chastain's shoot has her recreating other classic paintings.)

It's a major cover for Vogue, and not just because it's so stunningly gorgeous with its lush, saturated colors. Chastain has been due for a cover for some time, given not only her remarkable film achievements (hasn't she been in basically every Hollywood movie for the past two years?) but also her involvement in fashion.

She scored a gig as the face of Yves Saint Laurent Manifesto fragrance, and she's become a front row regular at Fashion Week (she was sitting at the Armani Prive show in Paris, in fact, when she got word that she'd been nominated for a Best Supporting Actress Oscar for "The Help" -- her reaction was adorable).

Her Vogue cover is a bit more serious, but no less endearing. See it below -- do you like the cover shot? 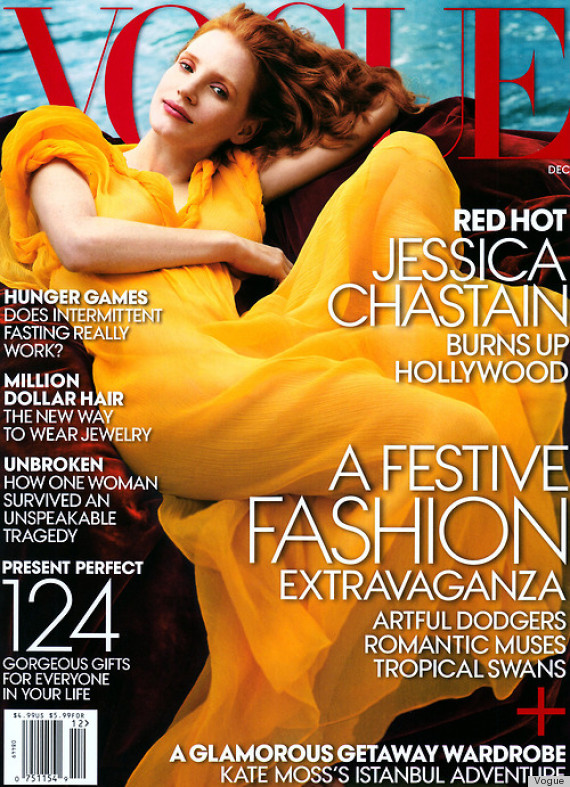