Journalist Jessica Grose had a "very serious job" as the managing editor of Slate.com's women's section, DoubleX, when she began writing the novel "Sad Desk Salad," her newly released satire about the blogging life, the lady blogging life in particular. The protagonist, Alex Lyons, writes for Chick Habit, a highly trafficked women's blog where she is required to churn out 10 posts daily on everything from meth head former beauty queens to women giving birth in bathtubs.

Her days consist of scouring the Internet for stories from the couch of her subterranean apartment, stopping only to throw on her unwashed "work muumuu" and hit up a nearby deli for what she terms her "sad desk salad." Until she receives a video of a respected -- and smug -- parenting expert's teen daughter Becky in extremely compromising circumstances and has to decide whether to publish it.

HuffPost Women spoke to Grose (with whom I once worked at DoubleX) about which parts of the novel are autobiographical -- Jess formerly blogged for Gawker Media's women's blog, Jezebel.com and has been known to wear a work muumuu herself, what people don't know about working on the Internet, and how the media covers personal scandal, especially those involving women and celebrity kids.

Why write a novel about blogging?

It wasn’t like I had always secretly, desperately wanted to write fiction. I had been inspired by events in the news to think of this story, and I couldn’t stop thinking about the idea. There had been that girl with the Duke sex list, and there was all this talk with Sarah Palin and the Tiger Mom's daughters. There seemed to be all these young women who had their lives laid open in various ways that they had no control over. The girl who wrote that Duke sex list said she just sent it to friends and didn’t want it to get out, and I believe her. This poor girl is getting called by the "Today" show for writing something that was just supposed to be a joke among her friends. And the daughters of the Tiger mother and also the kids of politicians, to an extent -- they weren’t public figures, and they all had their lives exposed.

I’d been observing that for six months, a year, and I thought it would be powerful to explore what it means to a) be a person whose life was exposed without your consent and b) be the person who exposes these people who aren’t necessarily public figures. I thought it would be much more interesting to do that from a fictional point of view.

I guess I was also feeling that my job was so serious, and the women’s issues that we’re dealing with now are so upsetting, that I wanted to do something that was a little more fun and a little more lighthearted. And so fiction seemed like a way to tackle an issue that again is serious -- can be serious -- but coming at it from a more fun perspective.

Chick Habit bears a very strong resemblance to a place that you once worked. What aspects of Alex’s experience are true of yours at Jezebel?

Not very many. My colleagues at Jezebel were all wonderful, and my boss, Anna Holmes, was literally the best and would never have pressured me, ever, to publish anything that I didn’t feel comfortable with. Or that any of us didn’t feel comfortable with. I don’t think any of the things that went down in the book would have gone down under her watch .

It was that I wanted to get across what it’s like to work on the Internet in a job that’s really demanding. I think people who don’t work on websites sort of dismiss it. Like, “Oh, you just sit on your couch and write whatever occurs to you -- that’s what you do as a blogger.” Actually, [these are] quite high-stress, really intense jobs. You work hard hours, there are high expectations, and high volume that you’re supposed to produce every day. I wanted to get across how difficult and somewhat oppressive that is. You have a certain number of posts a day, so you’re so wrapped up in the Internet that you get a weird perspective on the actual world that’s going on. Those things are not the fault of any place that I’ve worked, because all my jobs have been Web either writing or editing jobs, but I wanted to get across that myopia that can happen when you have to be so obsessed with the Internet. It was more just a setting than it was meant to be a comment on my experience there.

So you did not expose the misdeeds of any celebrity spawn while you were at Jezebel?

I didn’t. I would like to think that if I had been presented with a similar situation while I was there, that I wouldn’t have published it. But I have no idea. Maybe I would have justified it to myself. It’s hard to know what your judgment is going to be without knowing the actual details about the story. There have been times where I have written things I regret. More than I regret the topic, I regret the way I wrote about it. And I felt that I wasn’t fair. That was always my biggest regret when I was writing. I never wrote what I didn’t think, but sometimes when you’re writing so quickly, your snap judgments are just that -- snap judgments. And they are bitchy and unfair. So there are definitely times where I felt that I was unfair -- and wish that I had been fair.

Do you feel like the media punishes young women more harshly for misbehavior than young men?

I think the way that they’re talked about is crueler and worse than the way that men in similar situations are talked about, but if the son of a politician had a Weiner-esque photo revealed about him, you can be sure that he was going to get a lot of scrutiny. I think it wouldn’t be as cruel or damning or kind of disgusting as the judgment and scrutiny that a woman in the same position would get, but I think that men in general don’t get the same level of vitriol, even if they are scrutinized for similar behavior.

What’s the origin of the title “Sad Desk Salad?”

I actually came up with the book title before I started writing the book. It was a really depressing November day, and I was eating a salad at my desk, the same as I did pretty much every day at work. I think we had ordered in, so I hadn’t even gone outside to get it, and it just seemed really bleak, you know? I was just eating my sad desk salad at work, and I even tweeted that and people thought it was funny. So I was like, “Oh, maybe that’s...” I filed that title away, and I actually deleted that tweet because I didn’t want anyone to steal it, which is pretty paranoid probably, but yeah. That was the origin of the title. And when I would mention eating my sad desk salad to my friends who also had desk jobs, they knew immediately what I was talking about and identified.

I recognize some smaller details from your own life throughout the book. Was including those at all cathartic? Like a purging of your 20s, perhaps?

I don’t think I really thought of it as like a purge. I really enjoyed many parts of my 20s, and I didn’t feel like they deserved a full exorcism. Any detail that I included was because I thought it was too funny to not use in some way.

Would those too-funny-to-leave-out details include the guy whose tape art was "so visceral"?

I can’t. That will go with me to the grave.

[SPOILER ALERT!] I thought it was interesting that you made Becky ultimately unsympathetic, after we’d been sort of going towards having more sympathy for her. Why that choice?

The flip side of the vitriol towards women online is this concerned thing: “Oh I feel so sorry for them, they need our help, they’re weak.” I think they’re often more complicated than that. It was also very important to me that the heroine, Alex, be not entirely sympathetic, that she could make mistakes and be complicated. It was my goal to have all the women in the book be some combination of sympathetic and unsympathetic. As much as the book is a satire and is meant to be funny, I always prefer complicated heroines, so it was important to me to have the women in the book be complicated characters.

One more question: What should one look for in the ideal work muumuu?

OK, so my former work muumuu was actually a little short. It kept shrinking in the wash. It was supposed to be dry-cleaned, but like I was going to do that all the time. So definitely, you should be able to wash it. It should be a dark color so you can spill salad dressing all over yourself and not have to change it. It should be a true muumuu, A-line, no waist, no elastic involved, straight down. It should have roomy arms so that you can move around in it, and it should be cute enough that you can leave the house in it and not be embarrassed. You might want to have a summer and a winter muumuu. Oh, and it also has to be loose in the bust area so you can not wear a bra. That’s important. 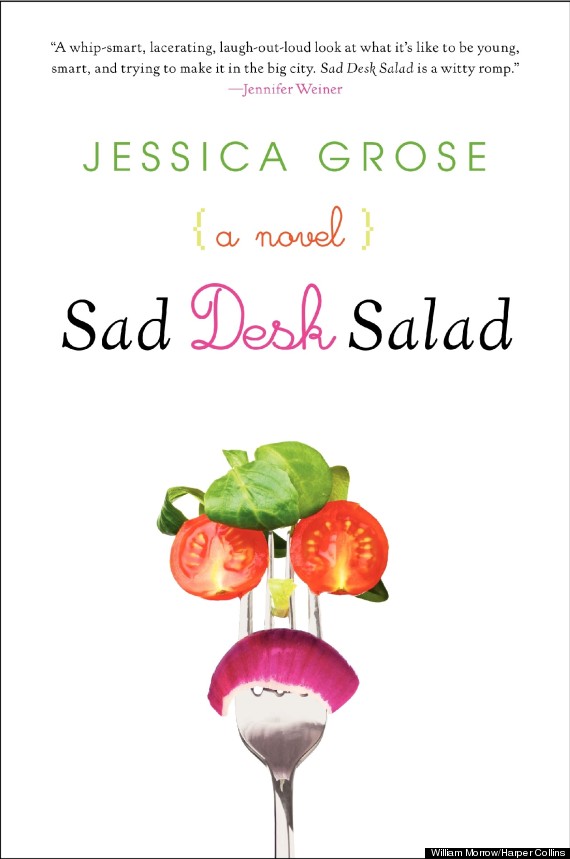