A Brooklyn woman is suing the NYPD after she was arrested in a Gravesend park for sitting on a bench topless.

The New York Post reports 24-year-old Jessica Krigsman was sunbathing in Calvert Vaux Park in July of last year, when she was approached by two officers, one female, and ordered to put her shirt back on.

According to the lawsuit, which was filed on Monday, Krigsman responded by citing a 1992 law permitting women to go topless in public.

“I’m like, what? Haven’t you heard of People v. Santorelli?" Krigsman told The Post. "This has been legal since the ’90s. Call your supervisor!”

Female toplessness has indeed been legal for more than two decades in New York City thanks to the 1992 court decision which ruled that banning bare female breasts in public violates equal protection clauses.

But according to Krigsman's lawsuit, the female officer ignored the law and told her to stop "mouthing off."

Krigsman was charged with "obstruction of a sitting area," and spent five hours in a holding cell at the 68th Precinct. The charge was eventually dropped in October.

Need a refresher on just how legal it is to go topless in New York City? Check out these photos from the Outdoor Co-Ed Topless Pulp Fiction Appreciation Society, the city's most topless literary club. 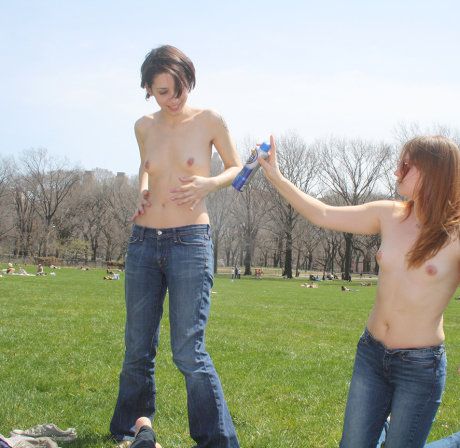