Jessica Lange entered the room with a wave. The "American Horror Story" star's all black ensemble was interrupted only by the red and green accents in her sunglasses and scarf. The five-time Golden Globe winner and two-time Oscar winner and Emmy winner has a new title: children's book author. But she hasn't left her "day job" just yet.

As the supreme witch in "American Horror Story: Coven," Lange's character, Fiona, is utterly fabulous. She's on a mission to stop herself from aging and help the remaining witches of the world defend themselves from danger. Viewers have already seen her character unearth Madame LaLaurie (Oscar winner Kathy Bates) and verbally spar with Marie Laveau (Oscar nominee Angela Bassett) and undercut her daughter's (Sarah Paulson) teaching sensibilities, but there's still more to come.

"Well, without giving anything away, again she goes on a big emotional roller coaster. [Laughs.] That's the thing that always intrigues me as an actor. That idea that you've lived a life to a hilt, but it's been a selfish life and it's been a self-centered, self-centric existence and now you're confronted with your own mortality. What does that feel like? That kind of remorse and that regret and that sorrow that comes with it finally at this point in your life -- can you stop the train and turn it around?" she said. "So, those are the elements as we've been going along that present themselves as the most interesting part of this character."

Lange is also interested in exploring Fiona's relationship with Cordelia, her daughter played by Emmy nominee Paulson. "[Fiona] wants the youth, the beauty, the power -- I mean all those things are very seductive and she can't quite give them up, and yet she realizes what a misdirected life and basically empty life she's had," she said. "It's kind of investigating and treading that territory between these huge shifts."

But like her other "American Horror Story" characters Constance and Sister Jude, Fiona will be gone in a matter of episodes. "The great thing about this show, which I think is unique, is you have these 12-13 episodes to investigate all of this, to really delve, but you don't have to ever come back to this woman ever again ... It's good, it's kind of a perfect situation."

Lange's character this year is an all-powerful witch, who with a flick of the hand can kill, maim and send people flying through the air. Those now signature hand movements weren't rehearsed. "No because I thought about that, and no one ever talked to me about it. The kind of chaos and insanity that goes into making this series, it doesn't lend itself to sitting down … you always feel like you're kind of behind the eight ball and you're rushing to catch up," she said. "I read, I looked for any kind of clue. There was nothing that helped with that and I just decided to make it as subtle and as kind of -- no big gesture, no nothing. [She makes a hand gesture] Hopefully nobody notices in case it's complete bullshit. [Laughs.]"

This season of "American Horror Story" features real-life figures, like Bates' sadistic Madame LaLaurie. "You wonder sometimes, don't you? You can't even make this stuff up. This woman actually existed and did this stuff, it's like 'Whoa,'" she said. "Kathy ... I love Kathy for this because there's no trepidation. There's no hesitation on her part, she just embraces the monstrousness of this. If you're going to do it, you need that kind of bravery as an actor to do it, and she has done it in spades. I love working with Kathy. We've done a few things together and it just feels natural."

Frances Conroy, who plays the mysterious Myrtle Snow, is another actress Lange said she finds herself excited to work with. Their characters have many confrontations and a long history, but Lange isn't spilling the beans. "All I can say is Franny is another one of these actresses that I absolutely look forward to working with."

"I think, if I have to say something, is my concern this year is we have too many characters working at the expense of maybe delving deeper into the relationships," she said about the large "Coven" cast. "I don't know how you accommodate so many characters in 50 minutes or whatever and tell their stories. That's my one big concern."

"American Horror Story" is just one of Lange's many artistic pursuits. With her new book, "It's About A Little Bird," Lange has taken a gift for her grandchildren and shared it with the public. "It was a story that I originally wrote and then did these illustrations for and put together in a little hand-bound book for a Christmas present for them one year," she told The Huffington Post.

Lange took all the photographs and wrote the story -- a true story -- about her granddaughters playing on her farm and discovering the cage that once housed her bird. In the book, Lange recounts telling her granddaughters about her prized pet and how he traveled with her from Rome to New York, smuggled in her pocket. "That whole thing is absolutely true," she said with a laugh. "I was in Rome at the time shooting 'Titus' and I had this bird and when I got ready to leave, it all happened just as I explained in the book. Of course that was pre-9/11, you could actually smuggle a bird in your pocket -- now nothing like that would ever work."

Lange said the book is about childhood wonder, family stories, imagination and exploration. "I feel that children nowadays … growing up with this media assault, everything is kind of provided for them. Whether it's the video games, the television or YouTube. They're experiencing life through this screen rather than in the natural world, which is far more interesting than anybody else could ever manufacture. Your imagination as a child is much more fascinating than what can be provided to you."

The author said she thinks children live in their own little world and that learning stories about their family that happened before they were around is a wild experience for them. "That was one thing I remember as a child, like when I'd eavesdrop on my mother and my aunt talking, or my grandmother. Just the stories, god it was fascinating. I loved it, I loved it … That was kind of what I felt, that idea of being present in the natural world and really experiencing what's there," she said. "Catching tadpoles down at the pond is so much more interesting than playing a video game." 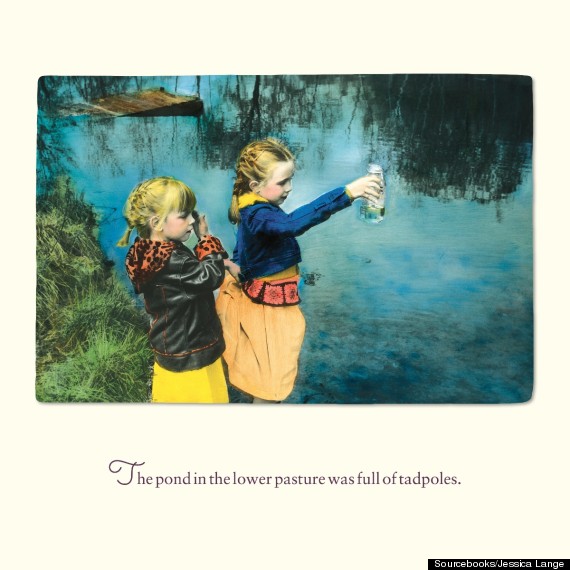 Now that she's recounted a little bit about her life outside her family for her granddaughters, could a memoir be next? "Well, memoirs are tricky, aren't they?" she said, laughing. "There are things you want them to know and definitely things you don't want them to know. I don't know, I'm not sure. It's funny because I've thought about it, and of course I've been approached about it, but I wouldn't want to do a sweeping 'this is my life' type of memoir. But I have thought about doing a specific moment in time, something that was really, to my mind, an extraordinary couple of years or something like that."

That moment in time has nothing to do with Hollywood. Lange said she has given thought to writing about the years right after she left home and life was "moving so fast." "It was so full and the world was changing so quickly. There was so much going on. I was traveling around the world," she said. "It was just an extraordinary time ..."

Lange has published photography books before. She said taking pictures is the "polar opposite of making movies and acting."

"It's mine and it's very private and it's very personal and intimate and it's only me. I can wander around the streets of Mexico at night, all by myself. It's the thing of observing rather than being observed. There's a wonderful kind of -- I don't know, it's very sensual and very hypnotic in a way," she said.

Her love of photography has led to an interest in directing, something she said she'd very much like to do. "I think -- and I can say this honestly -- I know how to talk to an actor, which a lot of directors don't," she said. Lange's photography has also been influenced by her time working as an actor. "I certainly understand the absolute emotional power of light and gesture, and things like that ... I would love to direct."

It's not in the cards for "American Horror Story: Coven," and will probably not happen next season, which Lange is already committed to star in. Chalk it up to her not really understanding the horror genre. "I don't know if this would be the thing I want to cut my teeth on," she said with a laugh.

However, Lange is looking at the possibility of stepping behind the camera soon and giving up acting. She's currently in her third season of "American Horror Story" and is committed for the fourth -- should FX order one -- and after that, well, acting may become just a memory. In a recent interview, Lange hinted she may be finished with acting.

"I'm going to do the next season of this and hopefully a play and then maybe one or two movies and then I think -- I feel like maybe then it's time to start something brand new in life," she said while fiddling with coffee stirrers. "Maybe it wouldn't be that far away, maybe it would be directing a film or something. I just don't want to keep doing what I've been doing. Not that I don't love it because I do. It's been one of the great passions in my life, but I also feel like I want to try something I've never done before … A lot of times you just keep going and you realize, well three years have passed or four years have passed and I just think maybe if I have in mind two years from now or whatever, I'll stop. That will actually force me to try and discover something else."

"It's About A Little Bird" is in stores now and available on Amazon. "American Horror Story: Coven" airs Wednesdays at 10 p.m. ET on FX.