Before we were old enough to know better, many of us grew up hearing -- and eventually repeating -- the nursery rhyme: "Sugar and spice and everything nice/That's what little girls are made of." Not so, Mother Goose, not so. Beginning with childhood the female body is constantly discussed, sanitized and idealized, making a woman's form seem more like a perfectly frosted cake than the hairy, smelly flesh it can be. 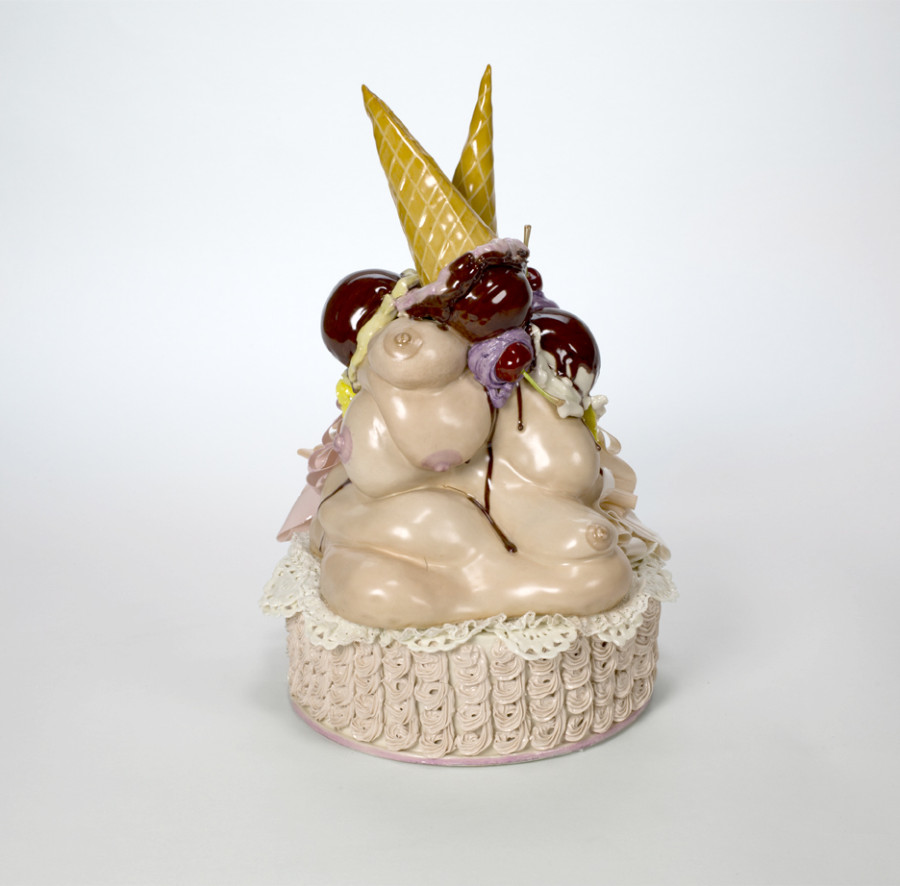 Brooklyn-based artist Jessica Stoller is exploring the bizarre lore of women's bodies in her deliciously gnarled exhibition "Spoil." If someone were to treat the feminine body as a baked good, or something equally constructed and appealing, Stoller considers the possibility of the precious good rotting. Combining Rococo maximalism with a Baroque eye for the grotesque, Stoller creates porcelain sculptures that tow the line between the feminine and the monstrous. 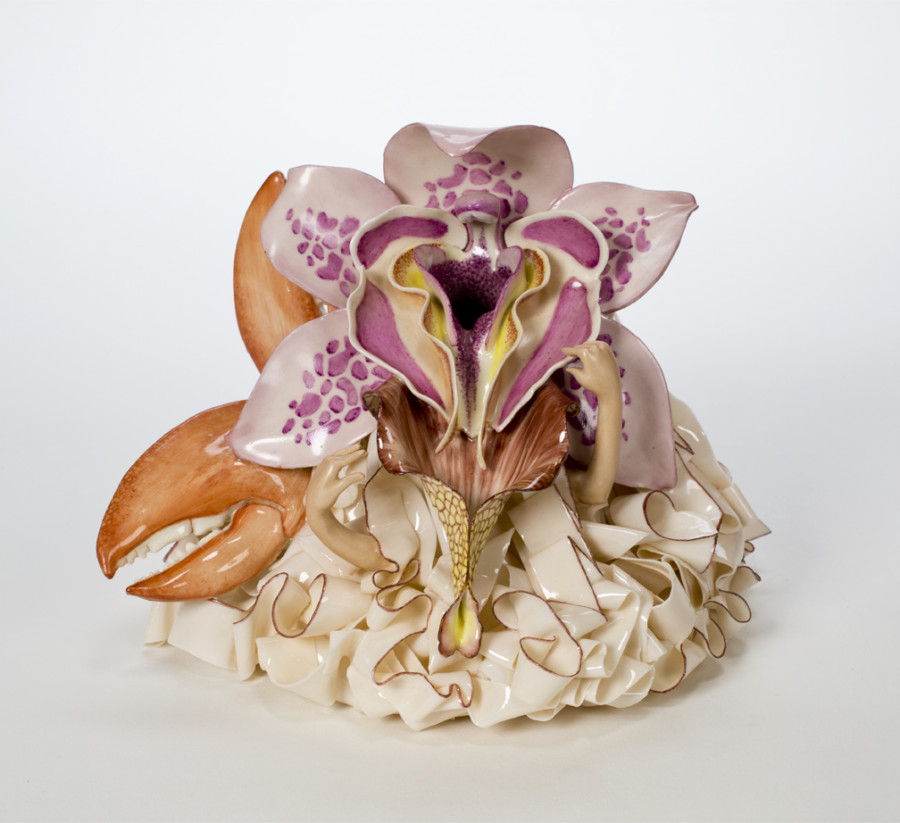 From her choice of medium Stoller places her work in a firmly feminist dialogue. Porcelain is historically associated with dolls and women's desire to look like said dolls. The material already points to the artificiality of femininity -- like a porcelain sculpture it is not born, but made. Stoller hand-builds the porcelain forms and coats them with a liquid clay. After she fires the works, the liquid clay leaves draping lace and fleshy fabric as its remains, resembling something between accessories and carnage. 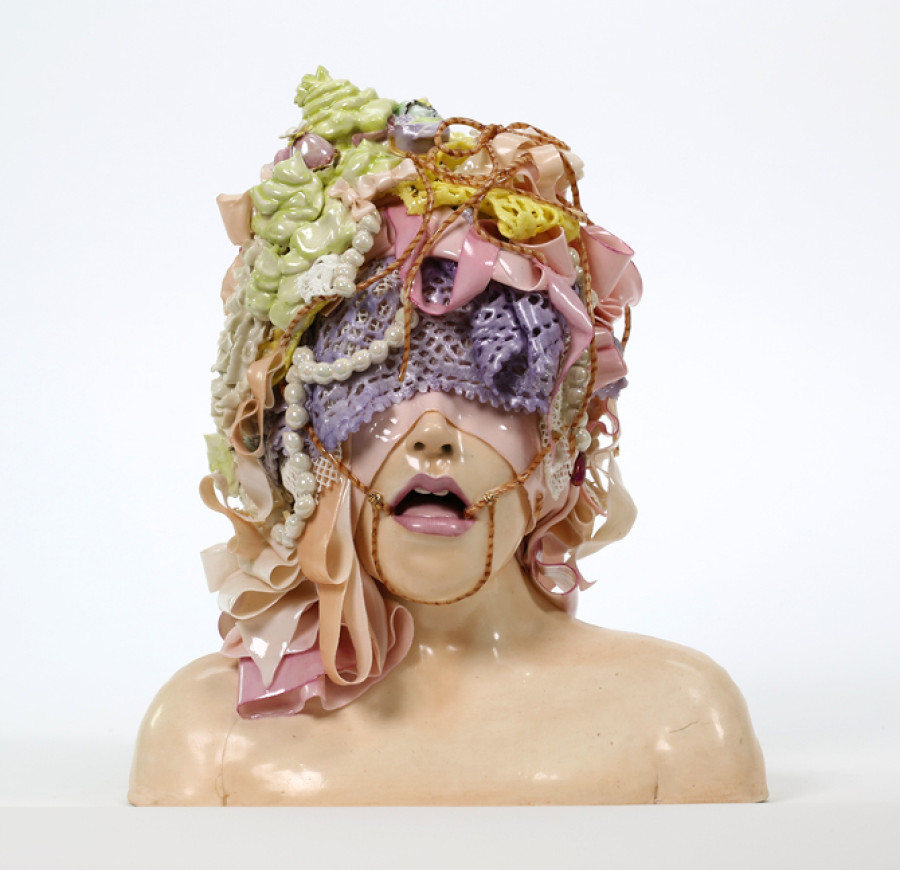 Stoller's totems are part Marie Antoinette and part Marquis de Sade -- with a little bit of Georgia O'Keeffe thrown in there too. Pearls, ribbons, diamonds, lace and other ostensible "girls' best friends" are interspersed with spikes, leather cuffs, gags and globular breasts. Adding a dash of something pretty and a dollop of something twisted, Stoller comments on the contradictions embedded in effortless femininity. As PPOW Gallery explains in the exhibition statement,    "Stoller's work is grounded in dual appearances; mobilizing our vision of the grotesque in opposition of contemporary societal controls that still plague the feminine body." 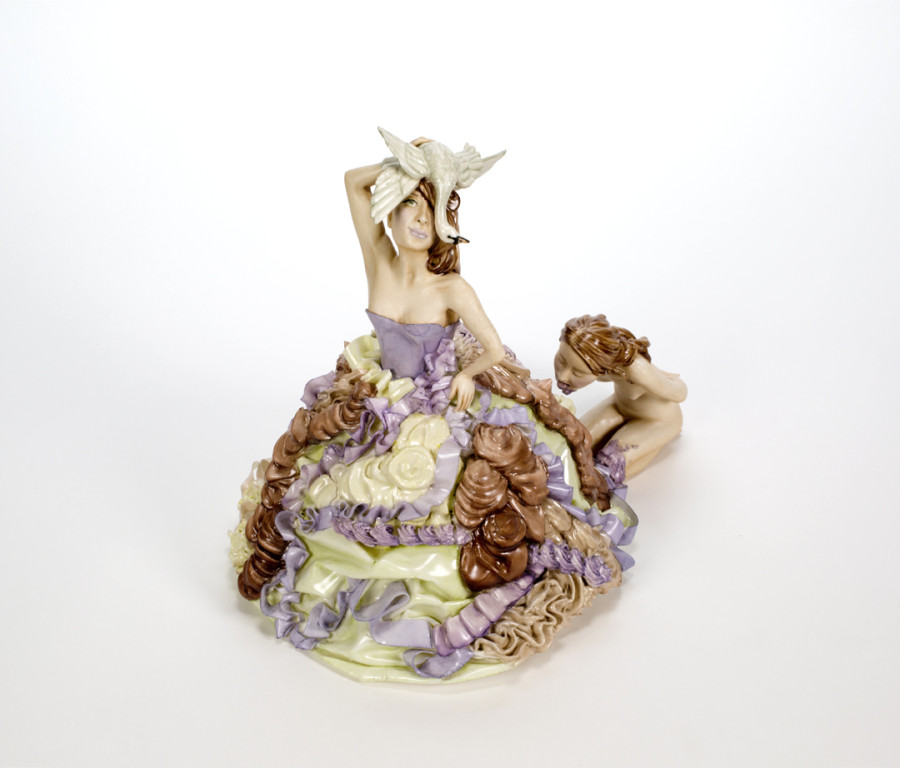 In "Untitled (stack)" purple ice cream cones rest atop a pyramid made of boobs on boobs on rolls of belly fat, turning a woman's bodily shame into a scrumptious snack. Another piece, "Untitled (lick)" features a figure donning a ball gown of ribbons, rumpled drapery and something that resembles waste. While she primps, a naked woman crouches behind her, hands bound behind her back, licking the brown, questionable stuff. The sugary sweetness of Stoller's sculptures leaves a spoiled aftertaste, in a good way. 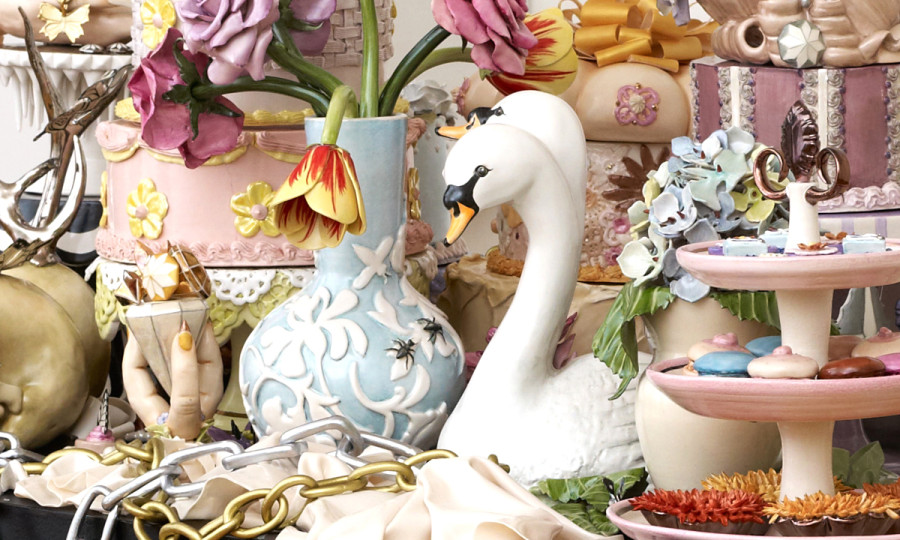 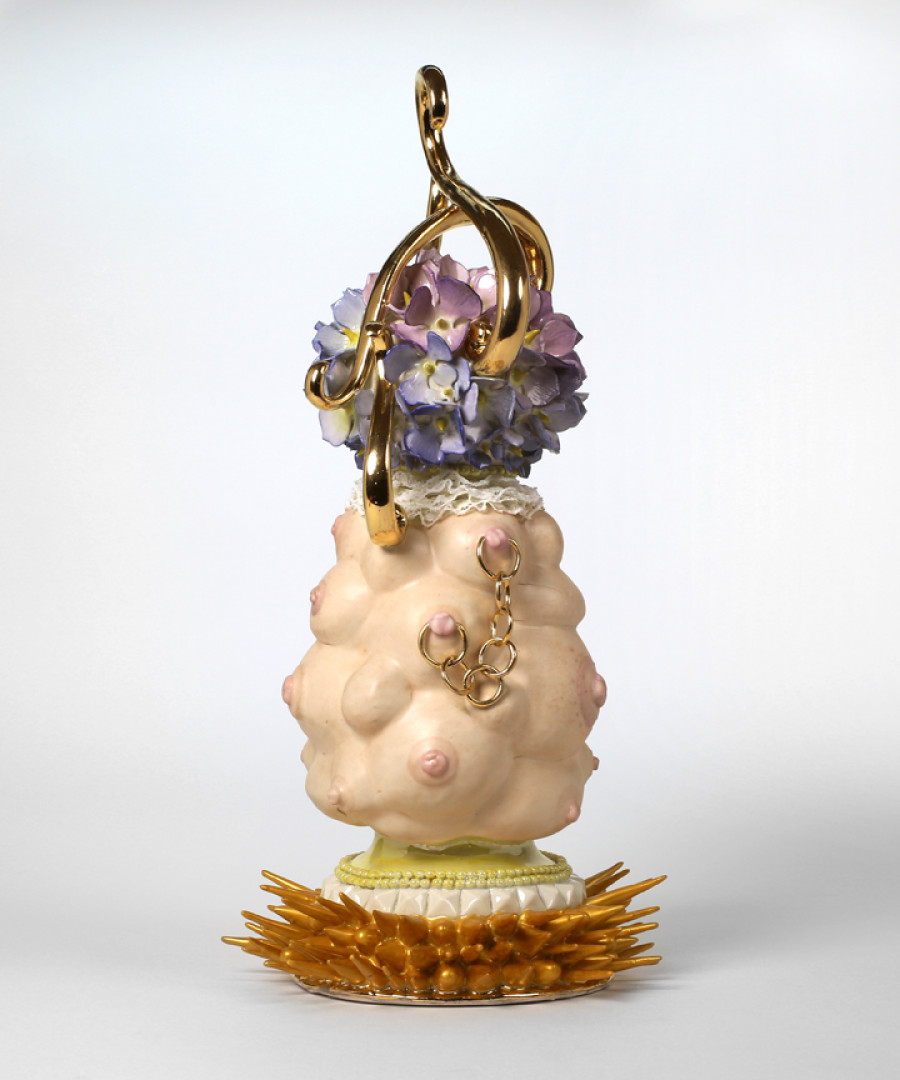 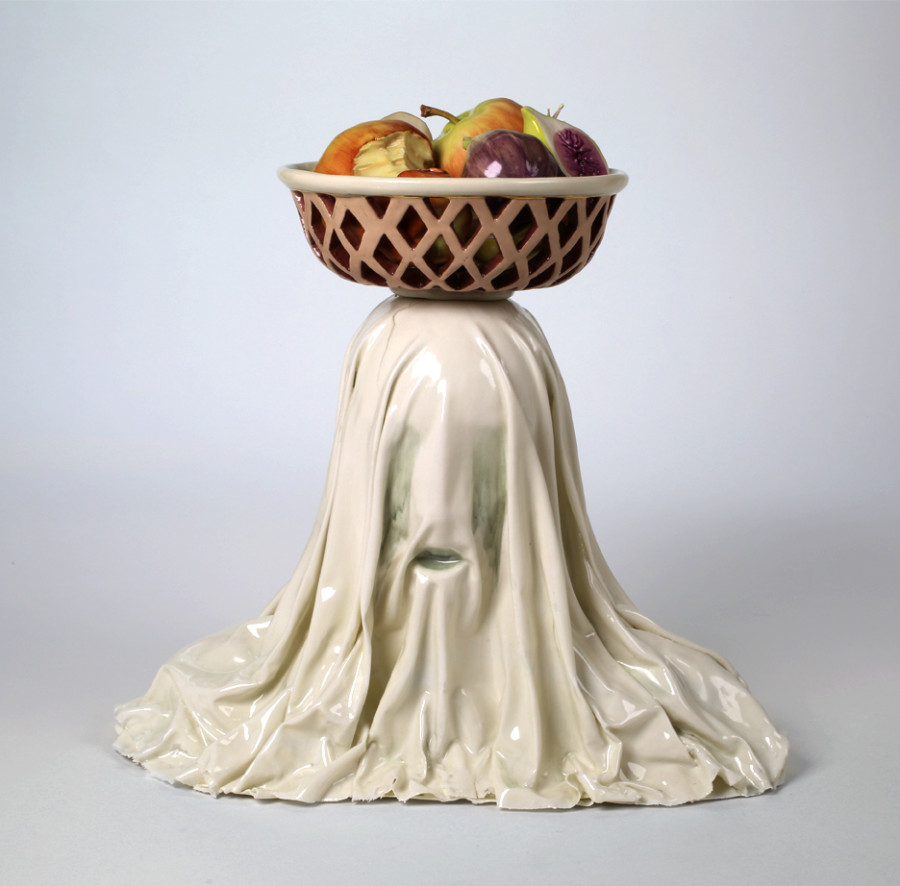 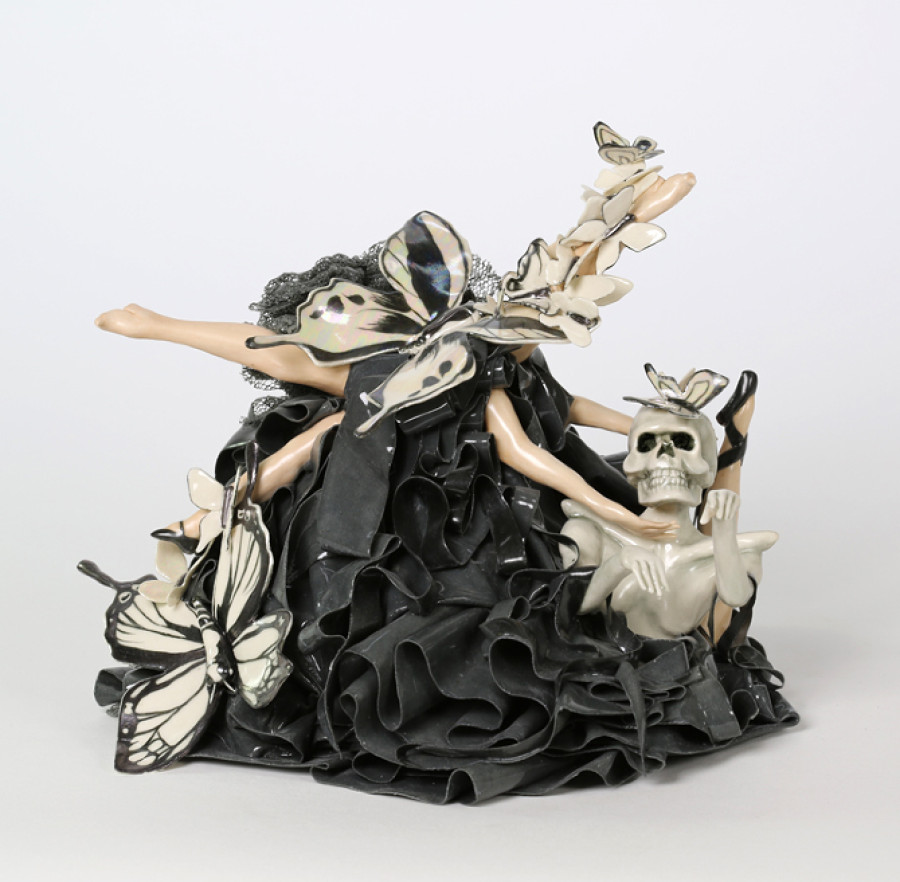 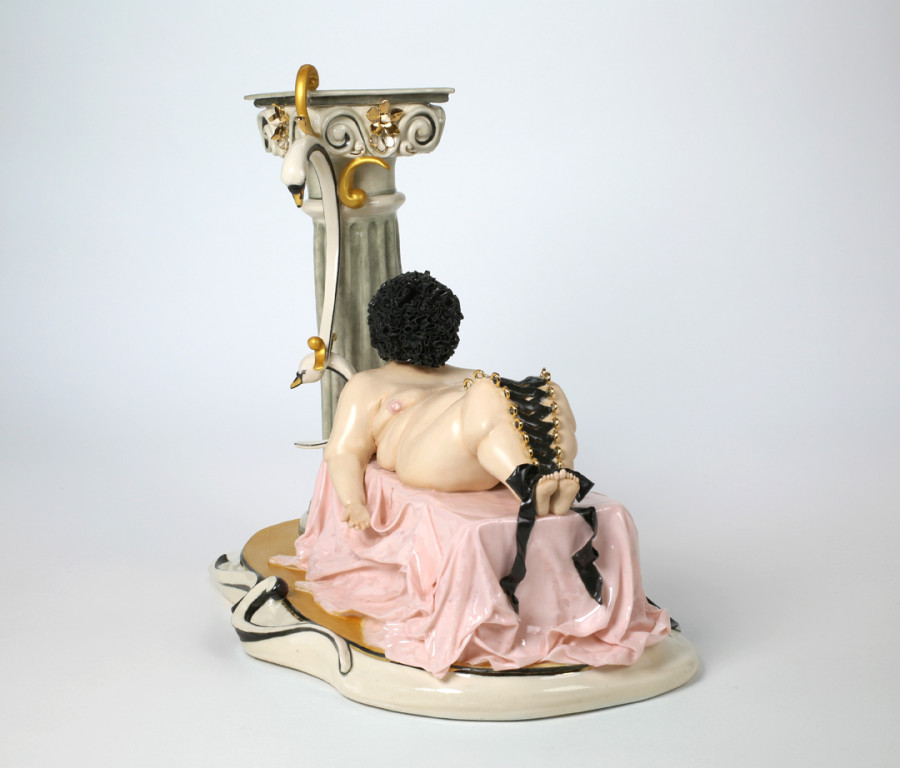 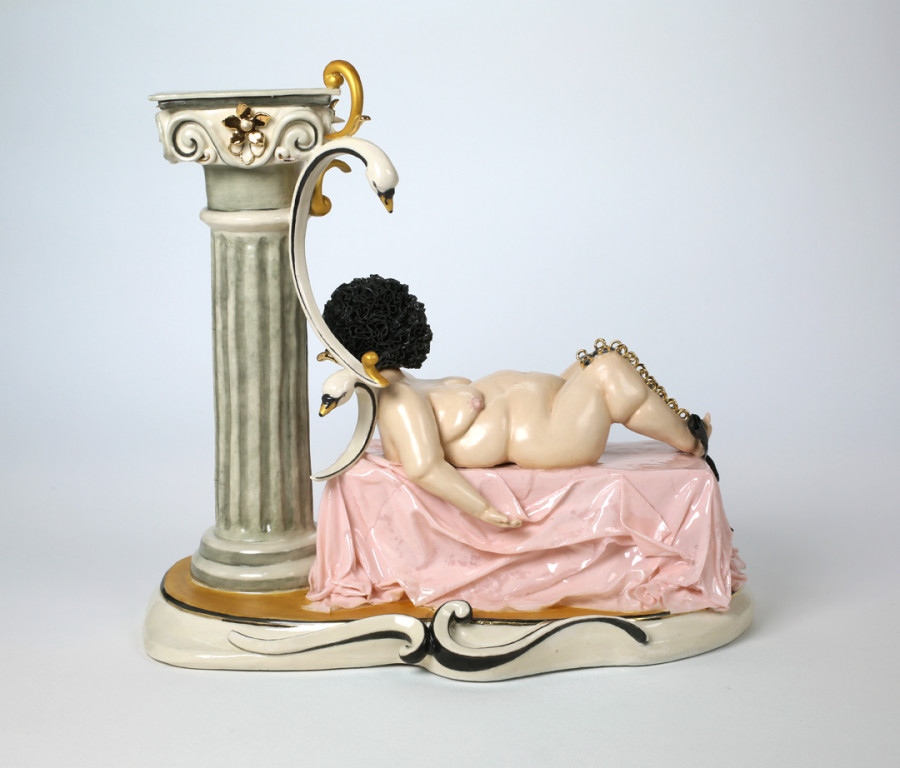