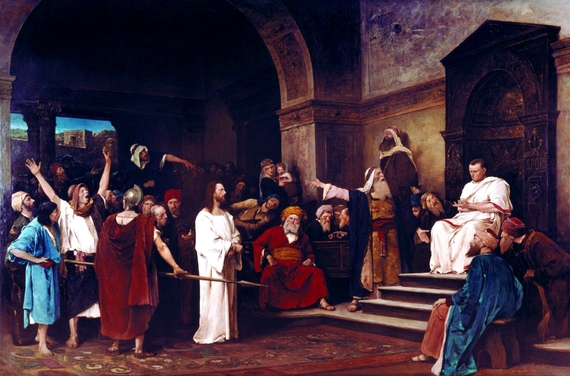 Christ Before Pilate by Mihaly Munkacsy--Wikimedia.org

If you were accused of a crime punishable by death wouldn't you use your best defense? And if you believed that you didn't commit a crime and, moreover, that the accusing authority lacked jurisdiction over you, wouldn't you make those points your main rebuttal? Why, then, didn't Jesus or Paul explicitly declare a new religion?

It's well documented that both Jesus and Paul were arrested and indicted on the charge of blasphemy against Judaism. By what authority did the Sanhedrin invoke these charges? The Sanhedrin was empowered by Rome to rule over Jewish affairs. At least two Roman emperors established Judaism as a protected religion with special privileges.

So the Sanhedrin was empowered to charge and sentence Jews for blasphemy--but only Jews. From the Jewish perspective, pagans, which would include most Romans, were blaspheming against Judaism. However, if you worshiped Zeus, Apollo, the Sun God, or a pantheon of Gods you were outside the jurisdiction of the Sanhedrin. All that Jews could do in response to pagan blasphemy was to rebel -- and they frequently did. For example, Jews rioted when Pontius Pilate first marched into Jerusalem as the new prefect (governor) with his troops displaying effigies, a violation of an agreement with Rome not to flaunt graven images. The confrontation barely avoided a massacre according to Roman Jewish historian Flavius Josephus.

Against this backdrop let's revisit the trial of Jesus after he was seized by Jewish authorities in Gethsemane Garden and brought before Caiaphas, the head of the Sanhedrin.

If Jesus had broken with Judaism and had started a new religion, as some still contend, why didn't he say so? He was facing death as a Jew charged with blasphemy against Judaism. Isn't that the perfect moment to say, "I'm not a Jew. I used to be a Jew, but I have differences with Judaism and object to fundamental Jewish doctrines. That's why I have started a new religion-- Christianity-- which is not Judaism. Therefore, you--Sanhedrin--have no authority over me."

But Jesus didn't do that. The issue of a new religion is never raised in the Gospels or other parts of the New testament. Why? Because Jesus' objections were not to Judaism but to the Jewish leadership, who in his view did not represent the spiritual core of the Torah, as his teachings did. He was first and foremost a Jew. Jesus' lifelong dedication to Judaism has been affirmed by many biblical scholars both Christian and Jewish with statements similar to these:

"What astonishes me when I read the stories about Jesus in the New Testament, is how completely embedded he is in this first century... Jewish world of religious practice and piety... Jesus presented continuously as going into the synagogue on the Sabbath. He is presented as going up to Jerusalem for the pilgrimage holidays, specifically in John, for any number of pilgrimage holidays, and in the synoptic gospels, most importantly, for Passover... What we've learned from the gospel stories is not that Jesus was not Jewish. Quite the opposite. He's completely embedded in the Judaism of his time" (Paula Fredriksen, Professor of the Appreciation of Scripture, Boston University).

" ...Of course, Jesus was a Jew. He was born of a Jewish mother, in Galilee, a Jewish part of the world. All of his friends, associates, colleagues, disciples, all of them were Jews. He regularly worshiped in Jewish communal worship, what we call synagogues. He preached from Jewish text, from the Bible. He celebrated the Jewish festivals. He went on pilgrimage to the Jewish Temple in Jerusalem where he was under the authority of priests [rabbis].... He was born, lived, died, taught as a Jew... What's striking is not so much that he was a Jew but that the gospels make no pretense that he wasn't. The gospels have no sense yet that Jesus was anything other than a Jew. The gospels don't even have a sense that he came to found a new religion..." (Shaye I.D. Cohen, Professor of Judaic and Religious Studies, Brown University).

But what about Paul? It's widely accepted that he carried the banner of the new religion of Christianity after his epiphany on the Damascus road, when he switched from persecutor of the followers of Jesus to a firm believer in Jesus as the Messiah. And isn't Paul's promotion of a new religion evident in the fact that he was called the apostle to the gentiles for converting uncircumcised pagans to his theology?

The New Testament, though, says otherwise. Yes, Paul converted gentiles. But his vision was of a new world Judaism that would be open to everyone--a vision that he clung to until his death. Decades into his ministry Paul still identifies himself as a Jew: "I am a man which am a Jew of Tarsus, a city in Cilicia...(Acts 21:39) and I am verily a man which am a Jew, born in Tarsus, a city in Cilicia, yet brought up in this city at the feet of [Rabbi] Gamaliel" (Acts 22:3).

Let's now put ourselves in Paul's shoes and relive his arrest and indictment. It's more than twenty-five years after the crucifixion, and Paul is making his third trip to Jerusalem to meet with the disciples of Jesus, led by Jesus' brother James. The disciples are still practicing Jews who worship in the temple in Jerusalem, although they believe that Jesus has fulfilled the prophecy of the Torah and should therefore be the center of Jewish worship. Paul agrees, but he wants to make Judaism, with Jesus at the helm, a world religion open to everyone. He seeks to accomplish that vision by not requiring circumcision or the dietary laws of Judaism. His proposal has previously met fierce resistance, if not outrage, from James and the disciples (although they eventually made some concessions) and even greater objection from other Jews who did not believe that Jesus was the Messiah.

Paul arrives at the temple in Jerusalem but first goes through a seven-day purification ritual (Jewish baptism) to affirm his faith in Judaism. Just as he is about to enter the temple he is attacked by Asian Jews (Acts 21:28) who consider his teachings about Jesus blasphemous. The disturbance spills into the courtyard outside the temple, where a mob joins in attacking Paul. The Roman commander and centurions intervene. They take hold of Paul and rough him up (Acts 21:31-32). When Paul says he is a Roman citizen the commander becomes frightened that he will be punished for mistreating a Roman citizen.

Since the disturbance and accusations against Paul are about Jewish law, he is taken to the Sanhedrin for questioning. Although the Sanhedrin was dominated by the Sadducees. who represented the rich elite class, Paul noticed that there were some Pharisees on the tribunal:

"But when Paul perceived that the one part were Sadducees, and the other Pharisees, he cried out in the council, Men and brethren, I am a Pharisee, the son of a Pharisee: of the hope and resurrection of the dead I am called in question. And when he had so said, there arose a dissension between the Pharisees and the Sadducees: and the multitude was divided. For the Sadducees say that there is no resurrection, neither angel, nor spirit: but the Pharisees confess both" (Acts 23:6-8).

Paul is then brought to Felix, the Roman prefect, for questioning. Felix recognizes Paul's "offenses" as a Jewish matter (Acts 24:5-6) but detains him for two years hoping for a bribe (Acts 24:26). Then the new governor, Festus, also determines that the accusations against Paul fall strictly under Jewish jurisdiction (Acts 25:21, 25). Fearing that he will face the same fate as Jesus if he is tried in Jerusalem--or even murdered before a trial--Paul invokes his right as a Roman citizen to be tried in Rome before Caesar (Acts 25:11-12). Festus has no choice but to send Paul to Rome.

If Paul believed that he had launched a new religion wasn't this the critical moment to announce it? Didn't his predicament demand that? "Governor: I am not a Jew. I have started a new religion that worships Jesus Christ whom the Jewish leadership has rejected. And Rome has no argument with me."

With these words Paul would have been released--especially since he was a privileged Roman citizen. But Paul doesn't invoke that obvious solution. He accepts being charged as a Jew and off to Rome he goes.

After a harrowing year-long journey that included a shipwreck Paul arrives in Rome and is put under house arrest. Paul then invites the Jewish leadership of Rome to his home and pleads his case. He reports that the Sanhedrin has charged him with blasphemy and adds that the Romans said he had committed no crime punishable under their laws (Acts 28:17-20).

If Paul missed the earlier opportunity to announce the new religion of Christianity he now has a second chance. And if he didn't see that strategy, surely one of his disciples might have said: "Paul, you've been preaching about Jesus for thirty years. At this time the converts to your version of Judaism are predominantly uncircumcised gentiles. The Sanhedrin has rejected Jesus and it's clear that the main body of Judaism will not recognize Jesus as the Messiah nor will they accept uncircumcised Gentiles into the house of Israel. Face it, Paul--you've launched a new religion. If you admit to that the Romans will free you and you can continue your important mission. You are a Roman citizen and we are far removed from the Sanhedrin. The Romans will surely accept your declaration."

But this quick, easy, and obvious response to Paul's imprisonment and impending trial is never pursued. More astonishing--for those who believe that Paul launched a new religion--a declaration of a new religion that could win his release is not mentioned or even hinted at in the New Testament. Eventually Paul is executed--as a Jew.

Paul's vision of an all-inclusive new Judaism thus evaporated. Christianity then sought to sever ties to Judaism and firmly established itself as the separate religion of Christianity.

Shouldn't this history of a common foundation foster mutual respect and understanding between Jews and Christian? Pope Francis endorses that and so should we all.

Bernard Starr is a psychologist, journalist, and professor emeritus at CUNY. He is author of Jesus Uncensored: Restoring the Authentic Jew and organizer of the art exhibit "Putting Judaism Back in the Picture: Toward Healing the Christian/Jewish Divide." website: www.bernardstarr.com