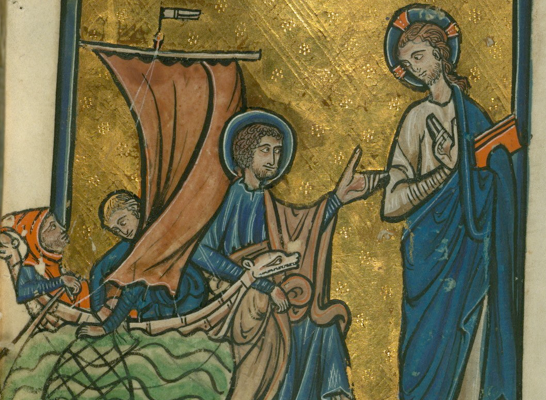 Near my desk there's a map of the Sea of Galilee. Luke called the sea Limnen Genneseret, the Garden of Riches, the waters on which Jesus walked like a ghost, the waters Jesus calmed in the storm. It was along these shores that Jesus summoned Simon the fisherman to be Peter, his foremost Apostle -- not in a synagogue full of celebrities, but on the smelly docks of the Sea of Galilee, the landing where working class Jews unloaded fish and sorted them.

I want to suggest to you that this is how Jesus might call us -- not in any formal or royal way, but in our ordinary world of work, a world of emails and meetings, diapers and dirty laundry, traffic jams and late nights at the office (or in my case, the seminary library). I want to suggest to you that Jesus calls us to something extraordinary, even if where we are feels like it could not be more ordinary.

This is how I imagine Luke 5:1-11. It was morning, and Simon's crew had been fishing all night and caught nothing. But nearby Jesus was preaching an early morning sermon, and people were gathered around, hungry to hear the Word of God. Simon knew him well enough: Only a few days earlier, the man had been to his house and healed his mother-in-law. Maybe after a long, fruitless night Simon found comfort in the young Rabbi's voice. But then, to the fisherman's surprise, Jesus walked over to his boat.

"Simon, I need your help," he said. "Can you row me out a little from the land in your boat so I can preach to the crowd?"

With that, the preacher climbed into his boat. Blinking, and with everyone watching, the seasoned fishing captain nodded and pushed the boat back into the water (after all, this stranger did just heal his mother-in-law).

What strikes me is that in calling Peter, Jesus did not try to entice or impress him. Instead, Jesus asked for a favor. He asked for help from within the fisherman's own workaday world. Without Simon to man the oars against the current, the skiff would drift, and the crowd would not be able to hear him, and without Jesus' Good News, Simon would be spiritually adrift. So Simon needed to hear the Word of Jesus, and Jesus needed Simon's rowing skills.

It's an "alluring" fishing story. Simon didn't know it, but the carpenter from Nazareth who just climbed into his skiff was doing his own kind of "fishing." And Simon was right there, right next to Jesus, two fishermen in the same boat, their worlds colliding incognito.

And so, as Jesus continued to peach to the crowd, Simon's hands deftly wielded the oars, keeping the boat the appropriate distance from shore. But here's where things get even stranger. When Jesus wrapped up his sermon, he didn't say thank you and ask to be taken back to shore. "Launch out into the deep," he said, "and let down your nets for a catch."

Simon must have stared back at him in shock. He had fished all night and caught nothing, and now this "landlubber" who knew nothing about the currents and the depths of the sea, or how one must drift the nets in steady good weather -- let alone how to cast a net! -- dared to tell him how to fish!

Had Jesus known a wink about fishing, he would have known that the reason Simon fished at night was because in the Sea of Galilee fish feed at night; by mid-morning they are all hidden under rocks. Simon's nets were designed for night fishing: the fish would see his nets in broad daylight. If this overeducated Rabbi had ever wet a line in his life, he would have known that in this warm freshwater lake the Tilapia congregate around the streams and springs along the shoreline because that's where the oxygen-rich water flows into the lake. He would have known that not far from the shore, the Sea of Galilee drops off into deep water, over twenty fathoms deep -- too deep for fishing. The order to strike out into deep water in broad daylight was ridiculous!

Why did Simon obey? A fisherman would never have presumed to speak up in synagogue. Yet this Rabbi from the highlands of Nazareth presumed to talk to him about fishing. Amazingly, Simon did not tell Jesus to go back to his wood shop and to leave the fishing to the pros. Instead, he ordered his crew to shove off. They were going to go fishing with a carpenter-turned-preacher in the wrong waters at the wrong time of day with the wrong equipment!

This is how I imagine what happened next. The lake was placid. Simon rowed gently to keep the nets at their proper depth. And then there was a sudden lurch. The hand-braided flax nets grew taut. Beads of water leaped from them. The boat began to lean. Wide eyed, Simon hauled the nets in. So many fish, innumerable fish. The boat shivered with life. It groaned under the weight. It began to swamp. Simon signaled to his fishing partners to come help, and together they filled their boats so full with fish they both began to sink. Gulls probably began to circle above in the hot sun. So much fish, so much quivering blue and lavender and virescence. They were rich!

His men laughing and resting against the rounded planks of the bow, Simon crawled over the draught to Jesus. Terrified, he fell to his knees: "Depart from me, for I am a sinful man, O Lord!"

Jesus looked into the fishing captain's sunburned eyes. "Do not be afraid. From now on, you will fish for people."

In a way, Jesus just launched a kind of "fishing partnership" with Simon. While Simon was catching fish from the lake, Jesus was "fishing for people." He "hooked" Peter and his crew by asking for help, not by offering it. He challenged Peter's authority while simultaneously affirming his fluency in his trade.

This is how Jesus invited Peter to join him vocationally as one of his Apostles, to be the beginning of the apostolic priesthood: "You are Peter," he would later say, "and on this rock I will build my church, and the gates of Hell will not prevail against it." Jesus did not belittle Peter's gruff, blue-collar talents nor did he pat him on the back. He entered Peter's working world, and invited him to hone his skills so that he might become an even better, truer fisherman. Catching and killing fish was lifted up into catching people and setting them free!

Now, let's say you are mechanic or a doctor or a mother or the President of the United States, and maybe you are wondering if God is calling you to something beautiful, something more. I want to suggest to you that, like Peter, God very well might "hook" you by asking for help, not by offering it. As he did with Peter, he might challenge your illusion of authority while simultaneously affirming your personality. If you are a mother, for example, Jesus will never trivialized your desire to be a mother. But he won't just pat you on the back either. Maybe Jesus will call you the way he called Peter? Maybe he will enter your world, the world of being, for example, a mother. Through nursing, caring, or teaching, or maybe continuing your career to help pay the bills, or maybe an out-of-fashion passion for being present with your kids every single day -- no matter: What if Jesus is inviting you to join him vocationally as his beloved within the very work God has given you to do, inviting you to hone your heart so that you might become an even better, truer you--for his ultimate glory?!

But honing is not like polishing silver. It's more like pruning a bush. Branches must be cut, dead growth removed. The call of Peter on the shores of Sea of Galilee does not stop with getting rich and the newfound vocation. Before Peter can become a "fisher of people," he must renounce his trade, his former life, his world. He must hang his nets, moor his boats, and leave it all behind. After the massive catch, comes the abnegation. The story ends: "And when they had brought their boats to land they left everything and followed him."

It was decisive. Scampering after the young Rabbi from Nazareth, Peter left a fortune of fish behind for someone else to bring to market. The call of Peter ends with a renunciation, a reckless surrender. Though one will enter a garden of riches, to follow Christ one must leave houses or brothers or sisters or father or mother or children or fields behind.

For most of us this will not mean quitting work -- and it certainly will not mean abandoning our children! -- but it will mean that we lay down everything in our hearts and offer ourselves wholly to God. Jesus calls us where we are. But to follow Jesus is a total self-donation, a complete self-giving. And in return God will give us the best gift he has to give: himself.

Note: This blog is based on the research and insights of Kenneth Bailey's "Jesus Through Middle Eastern Eyes: Cultural Studies in the Gospels" (Downers Grove: IVP Academic, 2008. pp. 135-146), and Wikipedia's site for the Sea of Galilee.