A British archaeologist says a first-century dwelling found beneath a convent in Nazareth, Israel, could have been Jesus' childhood home.

Dr. Ken Dark of the University of Reading and the Nazareth Archaeological Project argues that although the evidence can't prove Jesus grew up in the house, it does suggest it's possible.

According to the Bible, Jesus grew up in Nazareth, before leaving his hometown to wander and perform miracles. Later, he traveled back to preach, then survived an attempt by the townspeople to throw him off a cliff. Nazareth is now a predominantly Arab city of about 60,000 people, the majority of them Muslim.

Dark and his group began excavating beneath the Sisters of Nazareth convent in 2006, according to Biblical Archaeology. He then discovered what is said to be a first-century courtyard house, complete with doors and windows, partially carved out of the living rock. 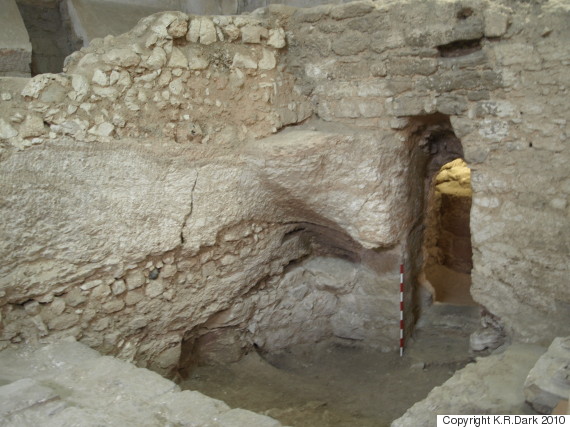 Much of what links the home to the possibility it housed Jesus is tied to its location.

"It is always very hard to link archaeological evidence to specific people," Dark told The Huffington Post in an email. He first used conventional archaeological methods to date both the house and a Byzantine church that was built over it, concluding that the church was once big enough to have attracted the notice of pilgrims centuries ago.

Dark's archaeological findings matched De Locis Sanctis ("Concerning the sacred places"), a text from the late 600s that gives an account of a Frankish bishop's pilgrimage to Nazareth. The Jerusalem Post reports that the text mentions a church in the city “where once there was the house in which the Lord was nourished in his infancy.”

Dark identified his site as the Church of the Nutrition, where the Byzantines believed Jesus had grown up.

"As it is a first-century house, then perhaps the Byzantines were correct in identifying it as where Jesus was raised -- but we have no way of telling if that was so," he explains. 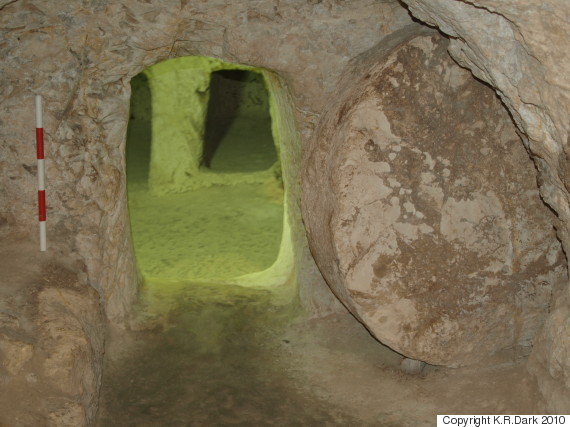 Dark also unearthed limestone containers, which can be koshered, further suggesting a Jewish family had lived in the house.

Dark's findings appear in the latest issue of the magazine "Biblical Archaeology Review" under the provocative title, "Has Jesus’ Nazareth house been found?"

“Was this the house where Jesus grew up? It is impossible to say on archaeological grounds,” Dark wrote, according to the Jerusalem Post. “On the other hand, there is no good archaeological reason why such an identification should be discounted.”

According to the Biblical Archaeology Society, the site has been known since the 1880s but had not been examined by professional archeologists until the Nazareth Archaeological Project started their work in 2006.


Jesus In A Wave
Simon Emmett/ SWNS
In February, photographer Simon Emmett captured this stunning shot while snapping pictures near the harbor in the coastal town of Lyme Regis, England. Amazingly, Emmett said he didn't notice the oceanic face until he "looked back through the shots [he] took."
Jesus Inside Garden Gnome
Courtesy Of Heather Andrews
Back in May, Heather Andrews, of Lynnville, Tennessee, accidentally broke a garden gnome that had been given to her as a joke by a friend. Turns out, the gnome had a statue hidden inside that looked like Jesus' head on a female torso. The statue attracted media attention, but also catcalls from people who told her it was demonic. So Andrews, 27, sold it on eBay and got $315 for it.
Treesus
WMC TV
In September, Tennessee lumber yard owner Daniel Turbeville was stumped over what to do with a split-open tree trunk that appeared to bear the image of Jesus Christ. Although some were skeptical that the tree really looked like Jesus, Turbeville took solace that 70 percent of his friends agreed that "Treesus" did resemble the King of Kings.
Jesus In Smoke Plume
KSEE TV
A mysterious image seen in a smoke plume during a fire rescue was a hot topic in Fresno, California, in October. This photo was filmed by a woman who saw a good samaritan run into the burning building. Eyewitness Wyatt Forker was convinced the smoke plume made an image of Jesus' face. "You see Jesus in the smoke, and then the person gets saved. That's, that's right -- they're not a coincidence."
Jesus In Chicken
Courtesy of Ernesto Hernandez
In mid-November, Ernesto Hernandez was about to bite into a chicken breast when he saw something bizarre. "I was about to bite my piece and it looked right at me," he told HuffPost. The chicken itself wasn't looking at Hernandez, but a strange image of a bearded man -- that possibly resembles Jesus -- certainly was. "It must be the char marks, because the chicken wasn't breaded," he said.